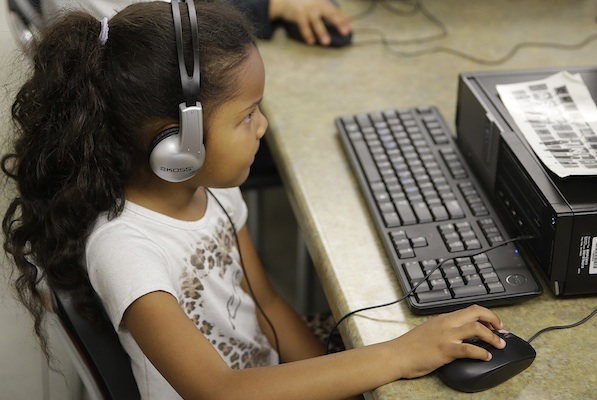 ATLANTA (AP) — Thousands of students are opting out of new standardized tests aligned to the Common Core standards, defying the latest attempt by states to improve academic performance.

This "opt-out" movement remains scattered but is growing fast in some parts of the country. Some superintendents in New York are reporting that 60 percent or even 70 percent of their students are refusing to sit for the exams. Some lawmakers, sensing a tipping point, are backing the parents and teachers who complain about standardized testing.

Resistance could be costly: If fewer than 95 percent of a district's students participate in tests aligned with Common Core standards, federal money could be withheld, although the U.S. Department of Education said that hasn't happened.

"It is a theoretical club administrators have used to coerce participation, but a club that is increasingly seen as a hollow threat," said Bob Schaeffer with the National Center for Fair & Open Testing, which seeks to limit standardized testing.

And so the movement grows: This week in New York, tens of thousands of students sat out the first day of tests, with some districts reporting more than half of students opting out of the English test. Preliminary reports suggest an overall increase in opt-outs compared to last year, when about 49,000 students did not take English tests and about 67,000 skipped math tests, compared to about 1.1 million students who did take the tests in New York.

Considerable resistance also has been reported in Maine, New Mexico, Oregon and Pennsylvania, and more is likely as many states administer the tests in public schools for the first time this spring.

(In Washington State, Garfield High School teachers and students have made a name for themselves after boycotting the MAP tests in 2013 -- and this year the school is set to continue opposition to "high stakes" testing.)

The defiance dismays people who believe holding schools accountable for all their students' continuing improvement is key to solving education problems.

Assessing every student each year "gives educators and parents an idea of how the student is doing and ensures that schools are paying attention to traditionally underserved populations," U.S. Department of Education Spokeswoman Dorie Nolt said in an emailed statement.

Opposition runs across the political spectrum.

Some Republicans and Tea Party activists focus on the Common Core standards themselves, calling them a federal intrusion by President Barack Obama, even though they were developed by the National Governors Association and each state's education leaders in the wake of President George W. Bush's No Child Left Behind program.

The Obama administration has encouraged states to adopt Common Core standards through the federal grant program known as Race to the Top, and most have, but each state is free to develop its own tests.

In California, home to the nation's largest public school system and Democratic political leaders who strongly endorse Common Core standards, there have been no reports of widespread protests to the exams — perhaps because state officials have decided not to hold schools accountable for the first year's results.

But in deep-blue New York, resistance has been encouraged by the unions in response to Democratic Gov. Andrew Cuomo's efforts to make the test results count more in teacher evaluations.

"That tells me parents are deeply concerned about the use of the standardized tests their children are taking," Crawford said. "If the opt-outs are great enough, at what point does somebody say this is absurd?"

Nearly 15 percent of high school juniors in New Jersey opted out this year, while fewer than 5 percent of students in grades three through eight refused the tests, state education officials said. One reason: Juniors may be focusing instead on the SAT and AP tests that could determine their college futures.

Much of the criticism focuses on the sheer number of tests now being applied in public schools: From pre-kindergarten through grade 12, students take an average of 113 standardized tests, according to a survey by the Council of the Great City Schools, which represents large urban districts.

Of these, only 17 are mandated by the federal government, but the backlash that began when No Child Left Behind started to hold teachers, schools and districts strictly accountable for their students' progress has only grown stronger since "Common Core" gave the criticism a common rallying cry.

"There is a widespread sentiment among parents, students, teachers, administrators and local elected officials that enough is enough, that government mandated testing has taken over our schools," Schaeffer said.

The pressure to improve results year after year can be demoralizing and even criminalizing, say critics who point to the Atlanta test-cheating scandal, which led to the convictions 35 educators charged with altering exams to boost scores.

"It seems like overkill," said Meredith Barber, a psychologist from the Philadelphia suburb of Penn Valley who excused her daughter from this year's tests. Close to 200 of her schoolmates also opted out in the Lower Merion School District, up from a dozen last year.

"I'm sure we can figure out a way to assess schools rather than stressing out children and teachers and really making it unpleasant for teachers to teach," said Barber, whose 10-year-old daughter, Gabrielle, will be in the cafeteria researching Edwardian history and the TV show "Downton Abbey" during the two weeks schools have set aside for the tests.

Utah and California allow parents to refuse testing for any reason, while Arkansas and Texas prohibit opting out, according to a report by the Education Commission of the States. Most states are like Georgia, where no specific law clarifies the question, and lawmakers in some of these states want protect the right to opt out.

In Congress, meanwhile, lawmakers appear ready to give states more flexibility: A Senate committee approved a bipartisan update of No Child Left Behind this week that would let each state determine how much weight to give the tests when evaluating school performance.