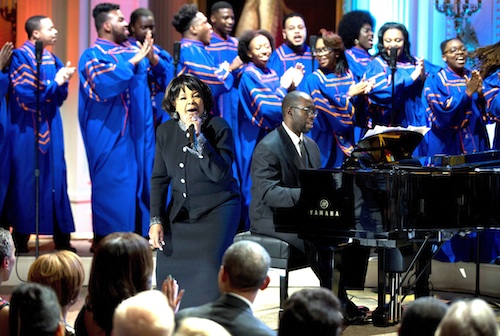 WASHINGTON (AP) — Kicking off a foot-stomping, hand-clapping celebration of gospel music, President Barack Obama said Tuesday that this particular genre of music had helped to shape America, beginning with the slave era and continuing on through the civil rights movement and beyond.

But “the heart” of gospel still remains true, although it has evolved over time, Obama said.

“It still has an unmatched power to strike the deepest chord in all of us, touching people of all faiths and of no faith,” he said as he opened the latest in a series of White House concerts, this one celebrating the role of gospel music in American life.

The normally staid White House East Room was transformed into a concert venue through the addition of red and purple lighting, a stage, piano, band members and backup singers. After brief opening remarks, Obama sat in the front row between his wife, Michelle, and Loretta Lynch, the federal prosecutor he nominated last year to be the country’s first female attorney general. Lynch’s confirmation vote by the full Senate has been delayed for months.

“I’ve got to say, you’re having a pretty good night when T Bone Burnett and the Queen of Soul herself, Aretha Franklin, show up at your house to jam,” Obama said. Shirley Caesar, Lyle Lovett and Darlene Love were among the other top recording artists who brought audience members to their feet.

Obama said gospel is rooted in the spirituals that were sung by slaves who, although forbidden to read or write, were allowed to sing.

“Songs were where their dreams took flight, where they expressed faith and love, as well as pain and fear and unimaginable loss,” he said. “They sang songs of liberation, if not for their bodies in this world, then for their souls in the next.”

The concert was the latest in the “In Performance at the White House” series of broadcasts by PBS. Tuesday’s concert is scheduled to air June 26.

Earlier Tuesday, Michelle Obama said gospel music is a “ray of hope” that fueled her love of music in general.

“It’s what helps connect us to God, to that higher power,” the first lady said at a White House-arranged gospel music workshop for students from around the country. “And for so many, when times are dark and when you’re struggling, gospel music is that ray of hope and it gives you that strength.”

She recalled being exposed to gospel at an early age through relatives, including her mother, Marian, who sang in a church choir.

“There’s nothing like hearing a choir sing an old gospel classic,” Mrs. Obama said. “When you hear that music, it gets your feet tapping and your heart pumping.”