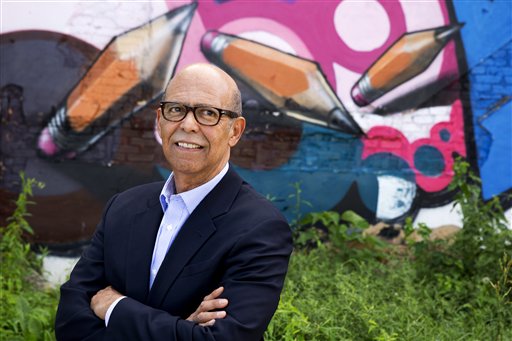 Michael Lomax, president of the United Negro College Fund, poses for a portrait by a painted mural in Washington, June 6, 2014. AP Photo/Jacquelyn Martin

WASHINGTON (AP) — Michael Lomax, head of the United Negro College Fund, isn't shy about ruffling feathers for his cause.

Lomax made headlines last year when he unapologetically announced a $25 million grant from Koch Industries Inc. and the Charles Koch Foundation — a powerhouse name in conservative politics.

President Barack Obama and his wife, Michelle, have personally donated hundreds of thousands of dollars to the fund, but that hasn't stopped Lomax from criticizing some of the Obama administration's proposals, such as efforts to rate America's colleges and universities and to provide free community college.

On Sunday in Atlanta, the UNCF holds its 36th annual telethon. Lomax sees the event as part of a greater effort to recruit a new generation of African-American stars to donate to the organization, which distributes millions in aid annually to historically black colleges and universities and provides scholarships to racial and ethnic minority students to attend all types of institutions.

Five things to know about the UNCF, based on an Associated Press interview with Lomax:

The UNCF faced criticism from some areas for taking the Koch donation. But Lomax said that for seven decades — stemming from a 1944 campaign started by oil baron John D. Rockefeller — UNCF has sought donations from people of all political persuasions. “We have always, always said our cause is universal and all Americans should support it,” Lomax said.

The UNCF got 1,800 applications for 44 positions in a Koch-funded entrepreneur program in a matter of weeks.

Lomax said he doesn't discuss politics with the Kochs. “What we talk about is the one thing we share a belief in, that young people should be given support to get a good education, and by the way more of them should be given the opportunity to become entrepreneurs,” he said.

The telethon has raised hundreds of millions, and Lomax said a new generation has stepped up to replace entertainers such as the late singer Lou Rawls, the longtime host.

Lomax said contributions are now coming from people like comedian Kevin Hart, musicians Pharrell, Trey Songz and Usher and NBA superstar Chris Paul, and other entertainers who may or may not have attended historically black colleges and universities but whose parents did.

Lomax was not a fan of the Obama administration's idea to make community college free, which would cost billions of dollars. He said Congress should instead strengthen the Pell Grant program to help low-income students attend all types of institutions.

There are hundreds of thousands of students who don't want to go to community college “and they should have the same resources and the same advocacy from the federal government,” he said.

The administration's community college plan may help middle-class families who might not critically need it, “and I'm not for that when there are people out there who are desperate,” Lomax said.

The administration is developing a college ratings system designed to look at access, affordability and outcomes so students and their parents will have a better idea about which institutions provide the best value.

Lomax said the focus on ratings has been a “great distraction” from discussions about how to better get money to students to pay for school. He said there are already plenty of ratings of colleges available.

What it's not addressing is “once I make my choice, how do I pay if I'm low to moderate income?” Lomax said.

WHY HISTORICALLY BLACK COLLEGES AND UNIVERSITIES?

Lomax sees a bright future for historically black schools despite tightening budgets. These schools produce almost 1 in 5 of all African-Americans with bachelor's degrees, according to the organization.

“We think we're doing more with less,” he said. “We could do even more with greater advocacy that we have earned.”