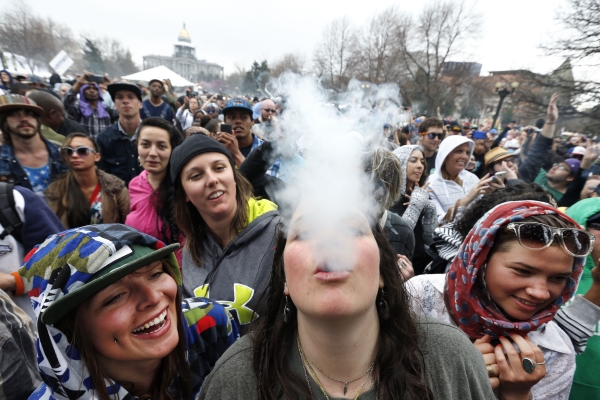 DENVER (AP) — Not surprisingly, the legalization of marijuana in Colorado has reduced pot arrests, but a newly released study says it doesn't solve one of the central goals of drug-policy reformers: ending racial disparities in enforcement.

A report from the pro-legalization Drug Policy Alliance released Wednesday showed that marijuana arrests in Colorado all but stopped after voters made the drug legal in small amounts for adults over 21. The report examined drug-related arrests in all 64 Colorado counties for two years before and two years after legalization in 2012.

The total number of charges for pot possession, distribution and cultivation fell almost 95 percent, from about 39,000 in 2010 to just over 2,000 last year.

Even after legalization, black people were more than twice as likely as white people to be charged with public consumption of marijuana, which remains a crime. Blacks were also much more likely to be charged with illegal cultivation of pot or possession in excess of the state limit, which is an ounce.

"I don't think young black or brown people are more likely to flout marijuana law than white people," said Art Way, Colorado director for the Drug Policy Alliance. "Legalization is no panacea for the longtime issues that law enforcement had with the black and brown community."

The analysis did not break out arrest data for Colorado's largest ethnic minority, Latinos. That's because data comes from National Incident-Based Reporting System, which does not tally numbers for Latinos.

"Racial disparities exist in other laws. What does that mean, that homicide law, rape laws, weapon laws are racist? There are other factors going on here that we need to address," Gorman said.

The news wasn't all bad.

The arrest data got a mixed response from the regional head of the NAACP.

"The overall decrease in arrests, charges and cases is enormously beneficial to communities of color who bore the brunt of marijuana prohibition prior to (legalization)," Rosemary Harris Lytle said in a statement.

"However, we are concerned with the rise in disparity for the charge of public consumption and challenge law enforcement to ensure this reality is not discriminatory in any manner."

In 2014, the year Colorado's recreational marijuana stores opened, black people accounted for 3.9 percent of the population, but they made up 9.2 percent of marijuana possession arrests.

For illegal marijuana cultivation, the disparities didn't just persist. They got much worse.

The Drug Policy Alliance did not conduct a similar arrest analysis in Washington state, which also legalized pot in 2012. But racial disparities appear to have persisted in that state, too.

Last September, Seattle's elected prosecutor dropped all tickets issued for the public use of marijuana through the first seven months of 2014 because most of them were issued by a single police officer who disagreed with the legal pot law.

About one-third of those tickets were issued to blacks, who make up about 8 percent of Seattle's population.

Drug-policy activists noted that despite persistent racial disparities, the remaining pot crimes are generally less severe. They described the overall drop in pot crimes as a positive development.

"What is often overlooked concerning marijuana legalization is that it is first and foremost a criminal justice reform," Denise Maes, Public Policy Director for the ACLU of Colorado, said in a statement.