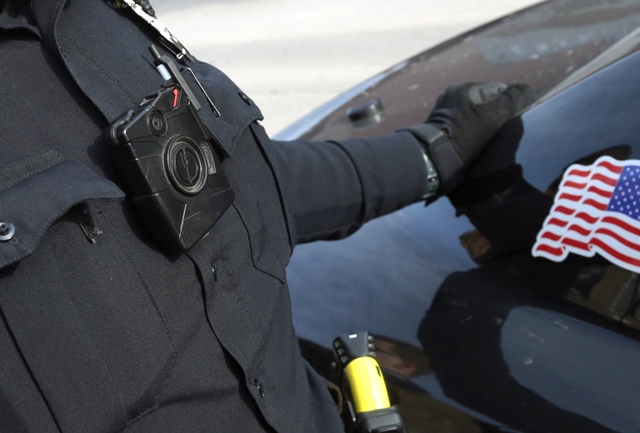 In this Feb. 2, 2015 file photo, Duluth police officer Dan Merseth has his body camera, left, activated (red light) alongside a squad car with an intoxicated person inside in Duluth, Minn. Despite body camera's spreading use and law enforcement concerns about sensitive footage becoming public, former police officer and Republican Rep. Tony Cornish says he plans to hold off on passing restrictions on the recording devices this year, saying he hopes to appoint a panel of experts to study the issue in the meantime. (AP Photo/Jim Mone, file)

Lawmakers in nearly a third of the states have introduced bills to restrict public access to recordings from police officer-worn body cameras. Some of the proposals:

— Arizona: Senate Bill 1300 passed the Senate on March 6. It says the recordings are not public records and that departments can choose to release them "only if the public's need to view the recording outweighs the interests of privacy or confidentiality or the best interests of the state." If departments refuse release, requesters would need a court order to get access.

— California: Senate Bill 175 would require departments using body cameras to develop a policy on "the procedures for, and limitations on, public access to recordings."

— Florida: Senate Bill 248 would exempt from disclosure all recordings taken inside homes; facilities that offer health care, mental health care or social services; the scene of a medical emergency; or any other place where a person "has a reasonable expectation of privacy."

— Georgia: Senate Bill 177 would treat the recordings as public records only if someone involved in an encounter or a witness had filed a complaint with a police department or review board. Anyone depicted in the video would have the option to petition courts to conceal their identities prior to public release.

— Indiana: House Bill 1225 and Senate Bill 454 ask for a study on potential restrictions on the disclosure of video, the "scope and size of public records requests" that could be made for them, the persons eligible to make requests, and the purposes for which videos may be used.

— Iowa: House File 452 says body camera recordings "shall be kept confidential." People who are featured in them and their representatives would be able to view and copy the recordings.

— Kansas: The Senate has approved a substitute for Senate Bill 18, which says the audio and video recordings "shall be confidential and exempt from the open records act." Persons who are subjects of the recordings would be able to request access to them.

— Michigan: House Bill 4234 would specify that videos taken in a "private place" would be exempt from disclosure under the state's freedom of information act.

— Minnesota: Senate File 498 would treat the videos as private records, available only to those who are the subjects of the recordings.

— Missouri: House Bill 762 would specify "that a video or audio recording from a law enforcement officer's dashboard or body camera will not be accessible to the general public."

— New Hampshire: House Bill 617 would exempt "video and audio recordings made by a uniformed law enforcement officer" from the state's right-to-know law.

— North Dakota: House Bill 1264 says any image "taken by a law enforcement officer with a body camera or similar device and which is taken in a private place" would be exempt from disclosure. The North Dakota House voted 87-3 to pass it Jan. 30.

— Oklahoma: House Bill 1361, as approved by a House committee last month, would allow police departments to deny any request for body camera footage and other records that would "clearly cause excessive disruption of the essential function of the public body." The department also could require advance payment for the costs.

— Oregon: House Bill 2571 would exempt the recordings from the open records law unless "each member of the public who is recorded consents to the disclosure in writing; or the interaction being recorded involves the use of force by a law enforcement officer and the public interest requires disclosure of that particular recording."

— Utah: House Bill 386 would shield recordings that occur "in a situation that constitutes a reasonable expectation of privacy" from disclosure. Recordings showing arrests and use of force incidents, among others, could be released.

— Washington: House Bill 1917 would keep recordings confidential "unless the request is for a specific incident and the request is made by either a person directly involved in the incident or a person with a court order."