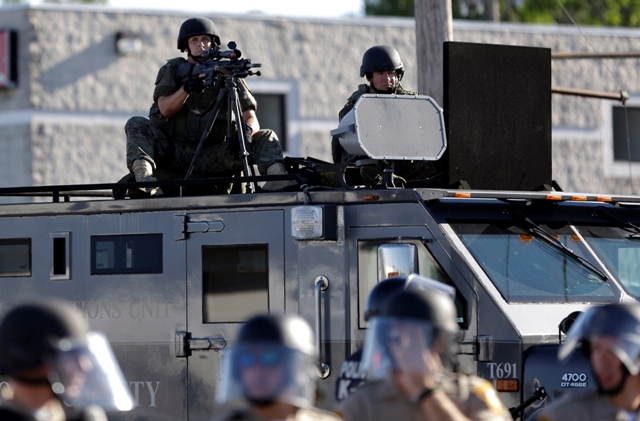 In this Aug. 9, 2014, file photo, a police tactical team moves in to disperse a group of protesters in Ferguson, Mo. that was sparked after Michael Brown, an unarmed black 18-year-old, was shot and killed by white police officer Darren Wilson. A Justice Department investigation has found patterns of racial bias in the Ferguson police department and at the municipal jail and court. The full report, scheduled to be publicly released as soon as March 4, says the investigation found Ferguson officers disproportionately used excessive force against blacks and too often charged them with petty offenses. (AP Photo/Jeff Roberson, File)

The report, which could be released as soon as Wednesday, marks the culmination of a months-long investigation into a police department that federal officials have described as troubled and that commanded national attention after one of its officers shot and killed an unarmed black man, 18-year-old Michael Brown, last summer.

It chronicles discriminatory practices across the city's criminal justice system, detailing problems from initial encounters with patrol officers to treatment in the municipal court and jail.

The full report could serve as a roadmap for significant changes by the department, if city officials accept its findings.

The Justice Department investigation found that black motorists from 2012 to 2014 were more than twice as likely to be stopped and searched as whites, even though they were less likely to be found carrying contraband, according to a summary of the findings.

The review also found that blacks were 68 percent less likely than others to have their cases dismissed by a municipal court judge. And from April to September of last year, 95 percent of people kept at the city jail for more than two days were black, it found. Of the cases in which the police department documented the use of force, 88 percent involved blacks.

The officials spoke on condition of anonymity because they were not authorized to speak publicly before the report is made public.

The Justice Department began the civil rights investigation following the August killing of Brown, which set off weeks of protests. A separate report to be issued soon is expected to clear the officer, Darren Wilson, of federal civil rights charges.

The report provides direct evidence of racial bias among police officers and court workers, and details a criminal justice system that through the issuance of petty citations for infractions such as walking in the middle of the street, prioritizes generating revenue from fines over public safety.

The practice hits poor people especially hard, sometimes leading to jail time when they can't pay, the report says, and has contributed to a cynicism about the police on the part of citizens.

Among the report's findings was a racially tinged 2008 message in a municipal email account stating that President Barack Obama would not be president for very long because "what black man holds a steady job for four years."

Justice Department officials were in St. Louis on Tuesday to brief Ferguson leaders about the findings, a city official said.

Several messages seeking comment from Ferguson Police Chief Tom Jackson and Mayor James Knowles III were not returned. A secretary for Jackson said he is not doing media interviews.

Scott Holste, a spokesman for Gov. Jay Nixon, declined comment, saying he has not seen the report.

Ben Crump, the attorney for the Brown family, said that if the reports about the findings are true, they "confirm what Michael Brown's family has believed all along, and that is that the tragic killing of an unarmed 18-year-old black teenager was part of a systemic pattern of inappropriate policing of African-American citizens in the Ferguson community."

Jim Salter and Jim Suhr in St. Louis and Alan Scher Zagier in Ferguson contributed to this report.