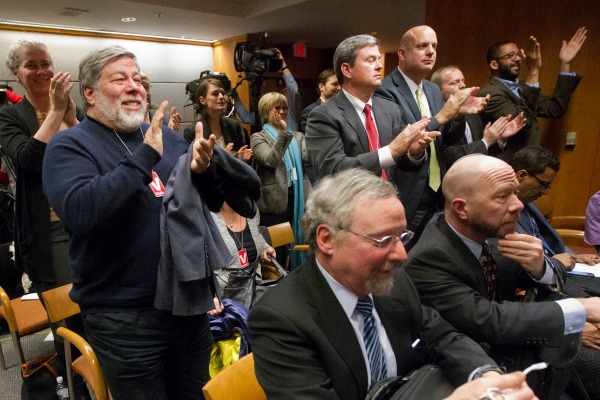 Apple co-founder Steve Wozniak, left, stands up and joins others in the audience in applauding the Federal Communications Commission (FCC) vote on Net Neutrality during an open hearing at the FCC in Washington, Thursday, Feb. 26, 2015. The FCC has agreed to impose strict new regulations on Internet service providers like Comcast, Verizon and AT&T. The regulatory agency voted 3-2 Thursday in favor of rules aimed at enforcing what's called "net neutrality." That's the idea that service providers shouldn't intentionally block or slow web traffic, creating paid fast lanes on the Internet. (AP Photo/Pablo Martinez Monsivais)

What "net neutrality" means and what is likely to happen next:

Net neutrality is the idea that Internet service providers won't block or slow Web traffic, instead allowing all data to have equal access to its networks. That means you won't be more inclined to watch a particular show on Amazon Prime instead of on Netflix because Amazon has struck a deal with your service provider to load its data faster.

For years, providers mostly agreed not to pick winners and losers among Web traffic because they didn't want to encourage regulators to step in and because they said consumers demanded it. But that started to change around 2005, when YouTube came online and Netflix became increasingly popular. On-demand video began hogging bandwidth, and evidence surfaced that some providers were manipulating traffic without telling consumers.

By 2010, the FCC enacted open Internet rules, but the agency's legal approach was eventually struck down in the courts. Thursday's vote by the FCC was intended to erase any legal ambiguity by setting clear rules on what broadband providers can do.

The FCC put the Internet in the same regulatory camp as the telephone, regulating it like a public utility. That means whatever company provides your Internet connection, even if it's to your phone, will now have to act in the public interest and not do anything that might be considered "unjust or unreasonable." If it doesn't, you can complain and the FCC can step in to investigate.

Regulators say reclassifying the Internet as a telecommunications service under the 1934 Communications Act will empower the FCC to go after Internet service providers if they start blocking or slowing Web traffic.

The FCC says it won't apply some sections of the law, including price controls. That means rates charged to customers for Internet access won't be subject to preapproval. But the law allows the government to investigate if consumers complain that costs are unfair.

Some of the big Internet providers, or possibly a group of them, are expected to file lawsuits. It's likely they will ask the courts to block implementation of the new rules. That legal wrangling could go on for years, probably well into the first term of the next president.

Meanwhile, congressional Republicans that oppose the regulation say they are committed to pushing for a legislative fix. Sen. John Thune, R-S.D., chairman of the Senate Commerce Committee, is expected to lead this fight, starting with a March 18 hearing.

But how far the GOP and industry will get in Congress is unclear. The FCC regulations give most Democrats exactly what they wanted in the first place. And Obama likely would veto anything else. Democrats are unlikely to negotiate any deal until the courts weigh in.

HOW THIS AFFECTS YOU

Consumers are unlikely to notice anything different about their Internet service. Industry says it's already operating under basic open Internet principals, and most providers say they have no desire to start throttling data for most of its customers.

What the FCC regulations do, however, is usher in a new era of government oversight where Internet service is deemed a public right. Consumers can complain if they don't believe they are being treated fairly. Regulators will have broad powers to go after companies they believe aren't acting in the public interest, including price gouging.

One open question is whether state taxes or fees on Internet service will eventually creep on to your bill. Right now, the Internet Tax Freedom Act prohibits that. But that law expires in October. While Congress is expected to renew the tax break, some states could start pushing back now that the Internet has been declared a public utility.