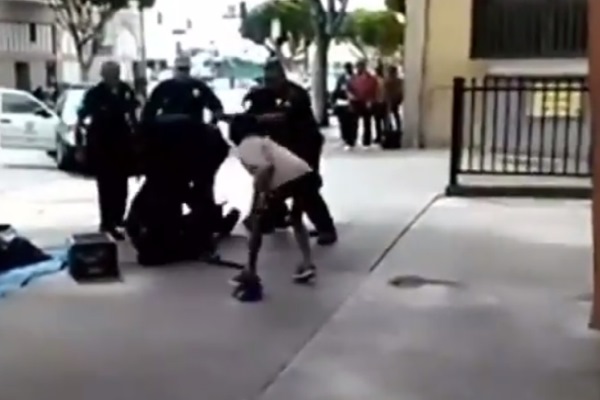 A still from the video that caught the last moments of 25-year-old Ezell Ford's life following an interaction with Los Angeles Police. Image via Youtube

LOS ANGELES (AP) -- Three Los Angeles police officers shot and killed a man on the city's Skid Row as they wrestled with him on the ground, a confrontation captured on video that millions viewed online. Authorities say the man was shot after grabbing for an officer's gun.

After the shooting, police are seen drawing their batons and warning an angry crowd to step back. Several shouted at the officers, accusing them of going too far.

The violence Sunday had echoes of the August police shooting of 25-year-old Ezell Ford, whose death in a struggle with Los Angeles officers brought demonstrations in the city. Ford was unarmed, but police said he was shot only after reaching for an officer's gun.

In Sunday's incident, witnesses told the Los Angeles Times that the man is known on the street as "Africa" and that he had been there for four or five months amid the tents, sleeping bags and trash of Skid Row, where many of the city's homeless stay.

The three officers, one of whom is a sergeant, shot the man as they struggled on the ground for control of one of the officer's weapons, LAPD Cmdr. Andrew Smith said. The officers had been responding to a report of a robbery, and a stun gun proved ineffective, he said.

Police planned to use the video in their investigation, trying to amplify its sound and pictures to figure out exactly what happened, Smith said.

"The video is disturbing," Smith said at a briefing with reporters late Sunday night. "It's disturbing any time anyone loses their life. It's a tragedy."

Smith said at least one of the officers was also wearing a body camera.

On the video - which drew millions of views - six officers can be seen responding to the scene. They begin wrestling with the man as he takes swings at them.

Two of the officers break away to subdue and handcuff a woman who had picked up one of their dropped batons.

The struggle becomes increasingly blurry and distant, but shouting can be heard, followed by five apparent gunshots.

Police did not release the man's name or give any other identifying details, and Smith said he did not know whether the man was homeless.

One witness, Jose Gil, 38, told the Times he saw the man swinging at police then heard one of them shout, "He's got my gun!" before the shots were fired.

Dennis Horne, 29, said the man had been fighting with someone else in his tent before officers arrived.

Tents and cardboard shelters cover the sidewalks of Skid Row, the downtown neighborhood where an estimated 1,700 homeless people live. Many of them struggle with mental illness and addiction.

Earl Ofari Hutchinson, head of the activist group Los Angeles Urban Policy Roundtable, called on the Police Commission to hold a special hearing on use of force by officers in Skid Row encounters.