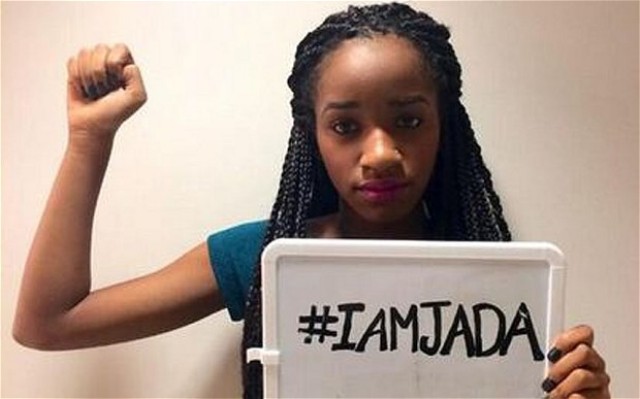 Houston teen Jada, victimized in 2014 by a gang rape after being drugged then publicly humiliated when her attackers tweeted images of her unconcious body after the assault, fought back with her own Twitter campaign, #IAmJada. Photo from Twitter

THIRD IN A SERIES

WASHINGTON (NNPA) – Simone Oliver had always been called, as they say in the religious community. She was active in the Baptist church throughout her youth, playing piano for the youth choir and even ghostwriting sermons for several pastors as a teen. She loved scripture, loved preaching, and loved God. For her, church was heaven on earth.

But it was also hell. At 15 years old, Oliver’s then-pastor called her into his church office, grabbed her, put his tongue in her mouth, and fondled her until she broke away. It was the third time in her life she had been sexually assaulted, already a rape survivor at 12 years old at the hands of her sister’s first husband, and again at 13 by a family friend staying in her home.

Still, her faith did not waver. In fact, it grew stronger as Oliver transitioned from being a public school teacher to a minister.

In the mid-2000s, she took on an associate pastor’s role at a non-denominational church in New Jersey. The founding pastor tried to court her for years until she finally acquiesced and the two began a secret relationship. However, a year later, he decided to marry someone else. Still, the affair continued.

“I couldn’t get out. It was almost like sinking into an abyss,” she remembered. “I had gone to someone in the church to let them know this was going on. And they pretty much turned on me.”

And no group leans on the church more than Blacks.

“While the U.S. is generally considered a highly religious nation, African-Americans are markedly more religious on a variety of measures than the U.S. population as a whole, including level of affiliation with religion, attendance at religious services, frequency of prayer and religion’s importance in life,” according to a report titled, “A Religious Portrait of African-Americans” by the Pew Forum on Religion & Public Life.
Black Women are the Most Religious

And among the most religiously committed, no segment is more committed than African-American women. The report found that 84 percent of Black women say religion is very important to them and 59 percent say they attend religious services at least once a week.

As committed as she was, Oliver eventually left that church, broke off the affair with the pastor, began dating the man who would become her husband, and was accepted into Princeton Theological Seminary. As her life got better, her former co-pastor’s behavior grew worse. He sent threats to her regularly, and began stalking her and her then-fiancé.

She recalled, “He said to me – not of himself – but he said, ‘A man can commit murder, do his time, put on a suit, and still be a man. But when a woman’s reputation is ruined, she is ruined.’ Those were his threats to me.”

In 2011, five days before her wedding, the pastor’s behavior moved beyond idle threats.

“It’s a miracle story I’m here and alive, because this man stabbed me 30 times. I was paralyzed from the waist down,” Oliver recounted. Years later, she still remembers his final threat, prior to the day of the attack: “‘When I’m finished with you, you will not get married, you will not have a ministry, and Princeton will never have you.’ That was the last thing he said to me.”

Oliver was stabbed mostly in her abdomen and back, damaging her spinal cord and liver. Her former co-pastor was arrested walking down the street covered in her blood, still holding his hunting knife.

Sharon Ellis Davis, a former criminalist in the Chicago Police Department and retired pastor, knows a bit about crime from more than one perspective.

She said, “I was married to a police officer, and there was a domestic abuse issue and sexual abuse. It was dismissed all the time. It was a matter of, ‘You all stop,’ or ‘Don’t be so bad,’ or ‘It’ll be okay.’ But never ‘I hear you, I understand you, I believe you.’ Even if [the department] knew the abuser was guilty, there was that code where you don’t rat on other police officers.”

So Davis channeled her frustration into something useful. She successfully lobbied for an internal domestic violence advocate, a civilian who would support and speak for domestic violence victims in police officers’ homes and became a full-time police chaplain.

But in Davis’ own church experience – first in the Pentecostal church as a child, then in the United Church of Christ as an adult – she saw parallels to the way she was treated by the police department.

“The two very important institutions that I was involved with – the church and the criminal justice system – both in the time that I needed them, failed me. Now they didn’t know they did, because they were not conscious of it.”

Davis feels that lack of consciousness grew from the problematic messages about women coming from the pulpit. For example she points out the Biblical stories that are emphasized, such as the false rape accusation of Joseph, and the ones that are largely ignored, such as the actual rapes of Dinah and Tamar as well as David’s coercion of Bathsheba.

To her, they all sent the message that the burden of sexual trauma is not welcome in the sanctuary.

“The church has not become the safe place it needs to be that would give some women in church permission to disclose,” Davis said. “The consequences of not having church as a safe place…you can kill the souls of the people that are there. People can lose their faith.”

Sex and sexuality remain taboo in many faith communities.

“How is it that the church is going to really be advocates for victims of rape in the Black church when even having normal conversations of sexuality can’t happen? How can we talk about patho-sexuality if we haven’t talked about normal sexuality?” she asked. “We’re still stuck in many ways on the thou-shalt-nots. We spend more time judging the behavior than helping someone understand this was not their fault.”

Even worse than a lack of knowledge among leadership is that perpetrators often exist within the church, their violence and damage unchecked and even covered up.

Oliver said, “I had a woman call me – I thought she was calling to check on me and see how I was – but she called to tell me her own story, about a pastor. Someone [else] told me a story. She was invited out to another church to preach, and was raped by the pastor who had invited her. When the third person, and fourth person, and the fifth time you hear these stories…. I’m like okay. Something is going on here.”

After more than three months of physical rehab, Oliver overcame her paralysis and learned to walk again. She testified in court against her attacker, who was sentenced to 21 years in prison.

For all their silences and inadequacies, many Black faith centers are adept at serving their communities and fostering communal solutions and cooperation. Both Davis and Oliver assert that Black faith centers have also made great strides toward addressing domestic violence, with permanent ministries and pastor trainings becoming more common.

“We’re better in the Black church at caring for people,” Davis explained. “But we’re not as good at having a model of pastoral care for people who have been sexually abused. We’re not having clergy exposed to the education that they need to understand these dynamics.”

Some outside the faith community recognize this as well, including Sherelle Hessell-Gordon, executive director of the D.C. Rape Crisis Center.

Oliver, now a full-time seminary student, said, “I’m a rape survivor, but I’m also a gender-based violence survivor, and it took the violence for me to really reckon with the rape,” she acknowledged. “In telling my story…I started to realize how many horror stories are in church.”

NEXT WEEK: Breaking the silence.
(The project was made possible by a grant from the National Health Journalism Fellowship, a program of the University of Southern California Annenberg School for Communication and Journalism.)