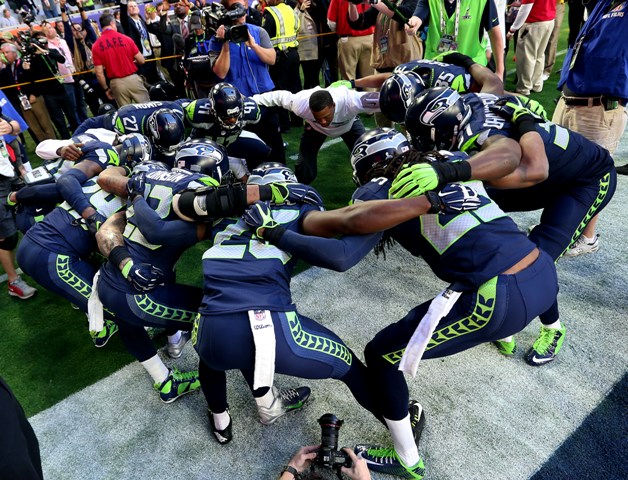 GLENDALE, Ariz. (AP) — The final 125 seconds included a perfect possession by Tom Brady for the go-ahead points, a juggling catch that could have been the play of the year, and a victory-clinching, end-zone interception on a pass — not run — from the 1.

A Super Bowl that got off to a slow start wound up with a "Whoa!" finish, a lot like the New England Patriots' entire season.

Brady threw two of his four touchdown passes in the final quarter to erase a double-digit deficit, rookie Malcolm Butler picked off Russell Wilson's short throw while Marshawn Lynch watched, and the Patriots ended a decade drought without an NFL title by beating the defending champion Seattle Seahawks 28-24 in a taut classic Sunday night.

"Every team has a journey," said Brady, who was voted Super Bowl MVP for a record-tying third time, "and a lot of people lost faith in us early. But we held strong. We held together."

He was talking about the preceding months, not minutes. But either made sense. After all, back in late September, when New England lost 41-14 at the Kansas City Chiefs to fall to 2-2, there was a lot of talk about whether Brady was done, whether the Patriots were simply no longer a powerhouse.

Yet Sunday night, when coach Bill Belichick was asked when he knew he had a special team, he pointed to halftime of that poor performance against the Chiefs.

"We weren't having a good day, but we kept fighting," Belichick said. "To me, if there was ever a time that we were not going to compete as hard, that would have been it. ... The fight and the competitiveness was there, and that gave me a lot of confidence going into the next week's game. That was a key point in our season."

And so perhaps these Patriots were prepared to weather the scrutiny that came with an NFL investigation into whether they deliberately deflated footballs in the AFC championship game two weeks ago. They compartmentalized that and focused on the Super Bowl.

Perhaps they were prepared to set aside Brady's two interceptions that helped dig a 24-14 hole in the fourth quarter. They moved into the lead after Brady connected with Danny Amendola from 4 yards out for one score with about 8 minutes left, then hit Julian Edelman from 3 yards for another TD with 2:02 remaining.

Perhaps they were prepared to not let the game get away when Seahawks receiver Jermaine Kearse made a falling, juggling, bouncing reception on his back for a 33-yard gain that set up first-and-goal from the 5 with 66 seconds to go. It was Butler who was in coverage on that play, although there was nothing more he really could have done.

Perhaps they were prepared for a shotgun pass by Wilson two plays later from the 1, rather than a run by the barrel-chested Lynch, who tied for the league lead in touchdown runs this season with 13.

Butler sure was ready, and his pick sealed the ultimate outcome, even if everyone had to wait while the officials cleared up a field-wide brawl.

"When they passed the ball, I was kind of surprised by it," Patriots nose tackle Vince Wilfork said. "But at the same time, we made the play."

Lynch gained 102 yards on 24 carries and scored an earlier TD, leaving many mystified as to why Seattle wouldn't have handed off to him in that vital situation.

Even some of the Seahawks were bewildered.

"I don't understand how you don't give it to the best back in the league," linebacker Bruce Irvin said. "We were on the half-yard-line and we throw a slant. I don't know what the offense had going on, what they saw."

With the retractable roof open on a cloudless evening, the Patriots (15-4) won the fourth Lombardi Trophy of the Brady-Belichick partnership, adding to those from the Super Bowls played in 2002, '04 and '05. They lost their last two trips to the big game, though, in 2008 and 2012, both times against the New York Giants.

This time, though, Brady and New England pulled it out — and in the process, prevented Seattle (14-5) from the ninth set of back-to-back Super Bowl championships.

At age 37, Brady went 37 for 50 for 328 yards and matched his childhood idol, Pro Football Hall of Famer Joe Montana, for most Super Bowl MVP awards. Brady also broke Montana's Super Bowl record for most career touchdown passes, getting to 13.

On the drive that resulted in the winning points, Brady went 8 for 8 for 65 yards.

"He's so calm and collected," Amendola said about his quarterback. "He's the best. He gets everybody to play at a higher level. He's our leader emotionally."

Didn't matter that the Seahawks came in with an eight-game winning streak. Or that their defense, led by Richard Sherman and the self-styled "Legion of Boom" secondary, was the first in more than 40 years to lead the NFL in fewest points allowed three seasons in a row.

This was going to be the Patriots' day. Belichick's day. Brady's day.

"I've been at it for 15 years, and we've had a couple of tough losses in this game," Brady said. "This one came down to the end, and this time, we made the plays."