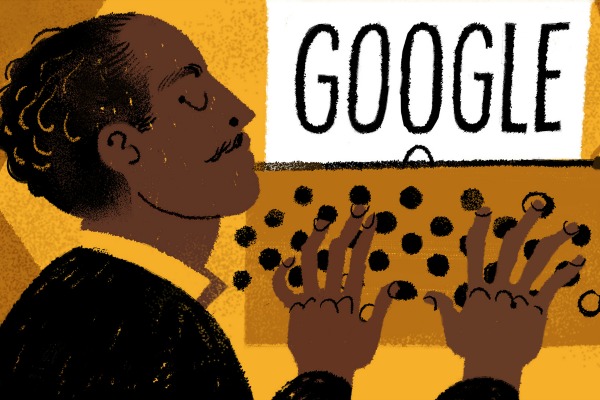 Clicking on the homepage of Google on Feb. 1 revealed a lively sight; jazz-era sketches, bold splashes of color and vintage cars roaring against a distant Manhattan skyline – all images celebrating the life and work of Langston Hughes.

Hughes was featured in a Google Doodle to commemorate his birthday and to celebrate Black History Month. These doodles are temporary alterations to the Google logo highlighting people, holidays and events.

The Hughes doodle can be found, here, in Google’s archives.

This doodle features a video based on Hughes’ poem “I Dream a World,” animated by Doodler Katy Wu.

Wu and another coworker chose this piece and said the message of the poem is still poignant to this day.

“The poem was chosen because it has a hopeful message to it, and although it was written many years ago, it still rings true today as a reminder that there is still much work to be done in order to achieve and maintain equal rights for African Americans and other under-represented minorities,” Wu said.

Born in 1902 in Joplin, Missouri, Hughes had a torrential youth plagued by frequent moves around the Midwest and a divorce by his parents. He was raised by his maternal grandmother Mary Patterson Langston after his father, James Nathaniel Hughes left the United States, and his mother, Caroline Mercer Langston travelled to find work.

Hughes described his upbringing as lonesome; he turned to books for comfort and began writing poetry. He worked a series of odd-jobs including crewman for the S.S. Malone, travelling to Europe and West Africa. He also had a short stint at Columbia University where he dropped out due to racial prejudice.

Hughes went on to become one of the leading intellectuals and poets of the Harlem Renaissance, a fertile, creative movement that espoused pan-African, progressive ideals. High-culture, folk-culture, classically trained musicians, jazz, and experimental modernist movements mixed together in this epoch.

It is this vein of creativity that Wu reflects in her doodle.

“I was really inspired by the jazz album art covers of the 1930s,” Wu said. “The art style of that time was both abstract, colorful, and bold.”

Wu was an illustrator for animated feature films before becoming a doodler. She worked in the Portland area on Laika’s Coraline in 2008.

The process of creating a Google Doodle starts with the doodlers who brainstorm ideas. Some of the ideas are gathered from the doodlers themselves, some are given by Google staffers from around the world, reflecting country-specific leaders and events. Anyone can submit ideas for Google doodles at proposals@google.com

Once the ideas are approved by Google, the doodlers get to work to create them, going through sketch reviews from team members and final approval before the link goes live.

The reach of these digital works is huge as Google gets over 5 billion searches on an average day, and consistently ranks as the most used search engine in the world.

The Hughes piece also shows Google’s actions to improve the diversity of their doodles. A report released in March 2014 showed that 74% of the doodles celebrated white subjects and 17% of doodles commemorated women of any race.

For Wu, this doodle is both a commemoration of Hughes and a starting point for new conversations about race and equity.

“I Dream a World reminds me of how much has changed over time, but also how much work and progress is still needed for equal civil rights in the U.S. and around the world.”