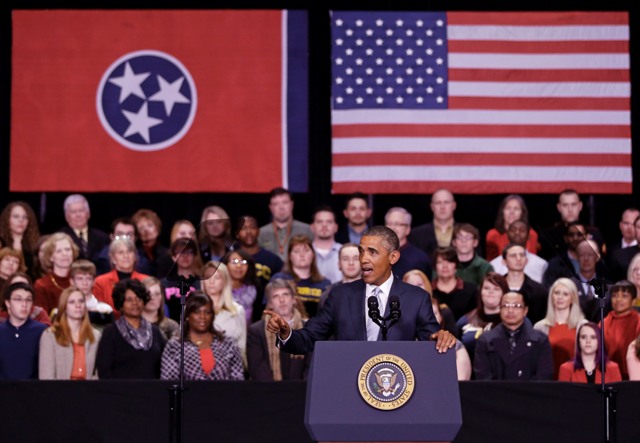 KNOXVILLE, Tenn. (AP) — President Barack Obama on Friday proposed to bring the cost of two years of community college "down to zero" for all Americans, an ambitious nationwide plan based on a popular Tennessee program signed into law by that state's Republican governor.

However, the idea and its $60 billion federal price tag over 10 years would have to make the grade with a Republican Congress that is showing little appetite for big new spending programs. Obama, who plans to push the issue in his Jan. 20 State of the Union address, argued that providing educational opportunity and creating a more skilled U.S. workforce shouldn't be a partisan issue.

"Community college should be free for those willing to work for it because, in America, a quality education should not be a privilege that is reserved for a few," he said in a speech at Pellissippi State Community College. He said a high school diploma is no longer enough for American workers to compete in the global economy and that a college degree is "the surest ticket to the middle class."

The White House estimated that 9 million students could eventually participate and save an average of $3,800 in tuition per year if they attend fulltime. Students would qualify if they attend at least halftime, maintain a 2.5 grade point average and make progress toward completing a degree or certificate program. Participating schools would have to meet certain academic requirements.

At North Lake College, part of the Dallas County Community College system, student Courtney Banks said such a program would help her and also allow others to enroll in classes.

"Other people, other young adults would be willing to get into school because it wouldn't be so far out of reach," she said. She added she's still trying to pay back loans from a previous school. "It costs a lot of money," she said.

The White House said the federal government would pick up 75 percent of the cost and the final quarter would come from states that opt into the program — a cost of $20 billion over 10 years. Spokesman Eric Schultz saidObama will propose new programs to pay for the federal portion in his budget next month.

Obama brought Tennessee's two Republican senators, Bob Corker and Lamar Alexander, with him on Air Force One for the event. But both said they thought states, not the federal government, should follow Tennessee's lead.

"Creating a federal program to me is not the way to get good things to happen in education," Corker told reporters from his seat in the third row of the speech. "You're always better off letting states mimic each other."

Alexander, a former education secretary who is set to take over the Senate committee that oversees education, said Washington's role should be to reduce paperwork for student aid applications. Obama said he agrees and wants to see that happen this year.

Obama also was joined on the trip by Vice President Joe Biden and his wife, Jill Biden, who drew applause when she told the audience she's been teaching English at community college for 20 years and still does as second lady. "This is the moment for community colleges to shine," she said.

The president and vice president also were visiting a manufacturing facility, Techmer PM in Clinton, Tennessee, to promote a second proposal to create a fund to help low-wage workers with high potential get training in growing fields such as energy, information technology and advanced manufacturing.

Education Writer Kimberly Hefling in Washington and John Mone in Irving, Texas, contributed to this story