Scalise Gets Backing of GOP in Supremacist Flap 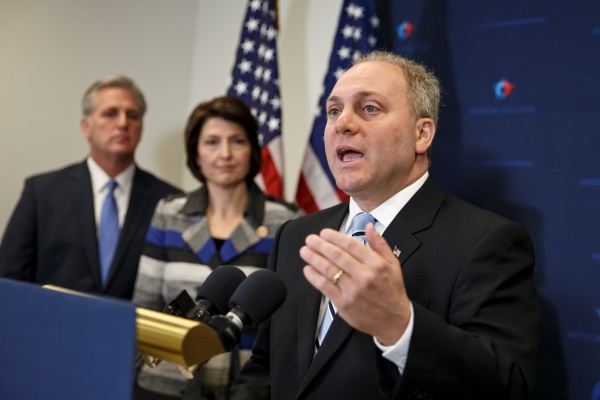 FILE - In this Nov. 18, 2014 file photo, House Majority Whip Steve Scalise of La., right, with House Majority Leader Kevin McCarthy of Calif., left, and Rep. Cathy McMorris Rodgers, R-Wash., speaks to reporters on Capitol Hill in Washington, following a House GOP caucus meeting. Scalise acknowledged that he once addressed a gathering of white supremacists. Scalise served in the Louisiana Legislature when he appeared at a 2002 convention of the European-American Unity and Rights Organization. Now he is the third-highest ranked House Republican in Washington. (AP Photo/J. Scott Applewhite, File)

WASHINGTON (AP) — Republican lawmakers are closing ranks behind the No. 3 House GOP leader, Steve Scalise, as the party aims to move past the controversy over his speech 12 years ago to a white supremacist group.

Scalise has said the speech was a mistake he now regrets, and party leaders, including House Speaker John Boehner, have backed him.

Love told ABC's "This Week" that Scalise has the support of his colleagues.

"I believe he should remain in leadership," Love said. "There's one quality that he has that I think is very important in leadership, and that's humility. And he's actually shown that in this case. And he's apologized, and I think that we need to move on and get the work of the American people done."

The issue arose last week when a liberal Louisiana blogger uncovered Scalise's speech to a 2002 Louisiana convention of the European-American Unity and Rights Organization, which called itself EURO. Former Ku Klux Klan leader David Duke founded the group, which the Southern Poverty Law Center has classified as a hate group.

Scalise moved quickly to distance himself from the group, saying he opposes its views and that as a state legislator at the time, he didn't have much staffing and didn't always know details of the groups he was invited to address. Party leaders backed him, and he picked up key support from Rep. Cedric Richmond, a black Louisiana Democrat.

Along with Love, incoming GOP freshmen Martha McSally of Arizona, Lee Zeldin of New York and Barbara Comstock of Virginia all indicated their support Sunday for Scalise, as did Sen. John Barrasso, R-Wyo.

Comstock said on CNN's "State of the Union" that colleagues view Scalise as "a man of good heart and good character."

Barrasso said that speaking to the group was a "grave mistake," but he cited Richmond's backing for Scalise and said the matter was not an issue for his constituents.

"This has not come up as a discussion point in Wyoming," Barrasso said on NBC's "Meet the Press."