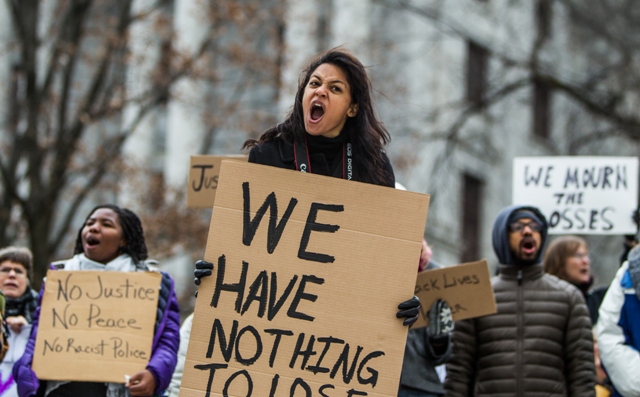 Angela Kirkland leads the chant on the steps of the Pennsylvania State Capitol in Harrisburg, Saturday, Dec. 13, 2014, in protest of police abuses in the black community. (AP Photo/PennLive.com, James Robinson)

WASHINGTON (AP) — Family members of young, unarmed black men killed by police — from Michael Brown and Eric Garner in recent months, to Amadou Diallo more than 15 years ago — packed a stage in front of the U.S. Capitol on Saturday, using a shared forum to urge thousands of supportive marchers to keep up the pressure for changes to the criminal justice system.

The march in Washington coincided with demonstrations across the country, from iconic Fifth Avenue in New York to the streets of San Francisco and the steps of the Boston Statehouse — mostly peaceful protests although about two dozen people were arrested in the Massachusetts capital for disorderly conduct.

"My husband was a quiet man, but he's making a lot of noise right now," said Washington protest marcher Esaw Garner, widow of Eric Garner, 43, who died in July after being put in a chokehold by New York City police during an arrest for allegedly selling loose, untaxed cigarettes.

Nationally, marchers chanted "I can't breathe!" ''Hands up, don't shoot!" and waved signs reading "Black lives matter!" Demonstrators also staged "die-ins" as they lay down across intersections and in one city briefly scuffled with police blocking an onramp to a highway.

Organizers had predicted 5,000 people at the Washington march, but the crowd appeared to far outnumber that. They later said they believed as many as 25,000 had shown up. It was not possible to verify the numbers; Washington police do not release crowd estimates.

"It's just so overwhelming to see all who have come to stand with us today," she said. "I mean, look at the masses. Black, white, all races, all religions. ... We need to stand like this at all times."

Joining the Garners in Washington were speakers from the family of Tamir Rice, a 12-year-old killed in Ohio as he played with a pellet gun in a park, and the mother of Amadou Diallo, who in 1999 was shot and killed in the Bronx by four New York City police officers.

Diallo's mother, Kadiatou Diallo, reflected on how the same issues being debated today were debated when her son was killed more than 15 years ago.

"We've been there so many times," she said. "Today we are standing still and demanding the same thing."

"Members of Congress, beware we're serious ...," Sharpton said in Washington. "When you get a ring-ding on Christmas, it might not be Santa; it may be Rev. Al coming to your house."

Several speakers asked the crowd to chant, "I can't breathe." Garner, 43, had gasped those words before his death. Some protesters also wore those words on shirts.

Protests — some violent — have occurred around the nation since grand juries last month declined to indict the officers involved in the deaths of Garner and Michael Brown, 18, shot and killed by a white police officer in Ferguson, Missouri, a suburb of St. Louis. Before the crowd started marching, Sharpton directed, "Don't let no provocateurs get you out of line. ... We are not here to play big shot. We are here to win."

Washington, D.C., and U.S. Park Police said they had made no arrests in the capital protests, though a small group of protesters split off after the march and briefly occupied various intersections in downtown Washington. In Boston, about two dozen people were arrested for disorderly conduct after scuffling with officers blocking an Interstate 93 onramp near the Nashua Street Jail.

The noisy march through the heart of Manhattan swelled to at least 25,000 people, police said. It snarled traffic but remained peaceful, with no arrests reported by late afternoon. On Saturday night, some protesters marched across the Brooklyn Bridge, blocking traffic in both directions.

Hundreds of protesters took to the downtown streets of San Francisco on Saturday, while at the University of California, Berkeley, police removed life-sized photographs of lynching victims that had been hung at the campus. Investigators believe they were connected to a smaller protest in Berkeley at noon.

Berkeley protest organizers said they didn't know where they came from.

"We hope that it's someone who wanted to bring attention to the issue," said one of the organizers, Spencer Pritchard.

Donna Carter, 54, marched with her boyfriend, whose teenage son was shot and killed by police in the 1990s while carrying a toy gun.

"It's good to see people of all colors here to say enough is enough," said Carter, who's black. "I'm a parent and every child that's killed feels like my child."

Others were there to show their outrage, including Rich Alexandro, 47, who carried a handmade sign with dozens of names of victims of police killings in which officers were never charged.

"It just seems like the cops are Teflon," Alexandro said. "There's no justice."

New York City police said two officers were assaulted by protesters on the Brooklyn Bridge when they tried to arrest a man who was attempting to toss a garbage can onto police officers below. Some marchers then blocked traffic on the bridge for about an hour.

Police said the officers were treated for bumps and bruises, including a broken nose. Police say there have been no arrests in that incident, but a backpack full of hammers and a mask was found.

Politicians and others have talked about the need for better police training, body cameras and changes in the grand jury process to restore faith in the legal system.

Terry Baisden, 52, of Baltimore said she is "hopeful change is coming" and that the movement is not part of a fleeting flash of anger.

She said she hasn't protested before but felt compelled to because "changes in action, changes in belief, happen in numbers."

D.C. Police Chief Cathy Lanier said the Washington march was peaceful. She mingled with the crowd and said she wanted to show solidarity with the marchers.

"This is one of the most well-organized events I've seen," Lanier said.

Other groups including Ferguson Action conducted "Day of Resistance" movements all around the country.

Justice for All March http://nationalactionnetwork.net/march-police/