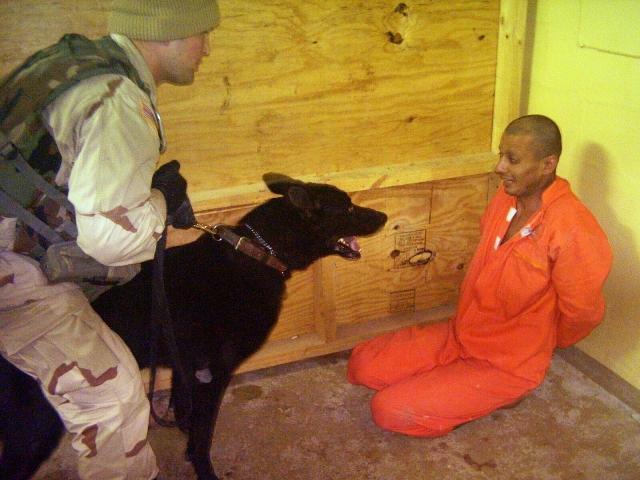 This file image obtained by The Associated Press shows Sgt. Michael Smith, left, with his dog Marco, watching a detainee at an unspecified date in 2003 at the Abu Ghraib prison in Baghdad, Iraq. Years after being released by the U.S. military, former detainees held in Abu Ghraib and Guantanamo Bay Naval Base are suffering debilitating injuries and mental disorders from their interrogation and alleged torture, according to a new report by a human rights group. (AP Photo/File) (AP)

WASHINGTON (AP) — For President Barack Obama, the long-delayed release of a scathing Senate report on harsh CIA interrogations underscores the degree to which the legacy of George W. Bush's national security policies has shadowed the man elected to change or end them.

While Obama banned waterboarding and other tactics upon taking office, his administration struggled for years with how to publicly reveal the scope of the program. Even as Obama claims closure in the torture debate, big chunks of Bush's national security apparatus remain in place, including the U.S. detention center at Guantanamo Bay, Cuba, and sweeping government surveillance programs. Obama has also thrust the U.S. back into a military conflict in Iraq and faces questions about his ability to end the Afghanistan war by the time he leaves office.

"It's been a lot harder to move certain things than they anticipated," said Ken Gude, a senior fellow at the Center for American Progress, a White House-aligned think tank. "There have been other areas in which they intentionally have not made much progress."

To some former Bush administration officials, Obama's mixed record in dismantling his predecessor's national security apparatus has vindicated the necessity of the steps they took in the aftermath of the Sept. 11, 2001, terror attacks.

"When you say things in campaigns and then you actually get into office and you're confronted by the breadth and scope of what the national security infrastructure is all about, it's a totally different perspective," said Michael Allen, who worked at the White House and State Department during the Bush administration.

Upon taking office, Obama moved quickly to issue an executive order prohibiting the CIA from using harsh interrogation techniques that he denounced as torture and backed a Senate inquiry into the practices. But Tuesday's release of the Senate Intelligence Committee's report has repeatedly been delayed, in part because of the administration's concerns about the breadth and specificity of what would be made public and whether it was worth potentially inflaming anti-American sentiment around the world.

The president cast the report as an important step in moving the country beyond actions he called "inconsistent with our values as a nation."

"One of the strengths that makes America exceptional is our willingness to openly confront our past, face our imperfections, make changes and do better," Obama said in a written statement. He showed some sympathy with Bush, saying, "The previous administration faced agonizing choices about how to pursue al-Qaida and prevent additional terrorist attacks against our country."

After six years in office, Obama is still struggling to dismantle some of the steps Bush said he was taking in the name of preventing terrorism.

The most glaringly unfulfilled promise is his pledge to close the Guantanamo prison within his first year in office, a commitment he made the same day he banned the harsh CIA interrogation techniques. More than 130 detainees remain at the detention center, and the pathway for removing most of them is unclear.

Many of Obama's supporters were infuriated when documents made public by National Security Agency leaker Edward Snowden revealed that the president had maintained and in some cases expanded mass surveillance programs that began under Bush. Obama pledged to make some reforms, but put the onus on Congress for overhauling the most controversial program: Section 215 of the USA Patriot Act, which authorized the bulk collection of Americans' phone records.

With little pressure from Obama for change, overhaul efforts have languished on Capitol Hill, and Section 215 was renewed again this month.

Perhaps Obama's most consistent promise after the Bush presidency was to end the two wars that started alongside the surveillance and interrogation programs. Just a few months ago, Obama appeared on track to fulfill that pledge, with the Iraq war having ended in 2011 and combat missions in Afghanistan scheduled to end later this month.

But Islamic State militants who strengthened in Iraq after the withdrawal of U.S. troops drew the American military back into a conflict there, though so far the U.S. is only using air power, not ground troops. The administration also announced this week that it planned to keep 1,000 more troops than originally planned in Afghanistan after this year, though the Pentagon says it is still on track to withdraw all U.S. forces by the time Obama's presidency ends in early 2017.

For White House supporters, the question now is whether the final two years of Obama's presidency will bring about other significant shifts away from Bush's national security legacy.

"This is going to be the defining issue of the president's last two years in office on national security policy," Gude said, "whether he can genuinely pass on to his successor a changed and reformed foreign and security policy or whether we're still mired in some of the same old debates that at that point will be 15 years old."