Lawyer: No Indictment for Officer in NYC Chokehold Death 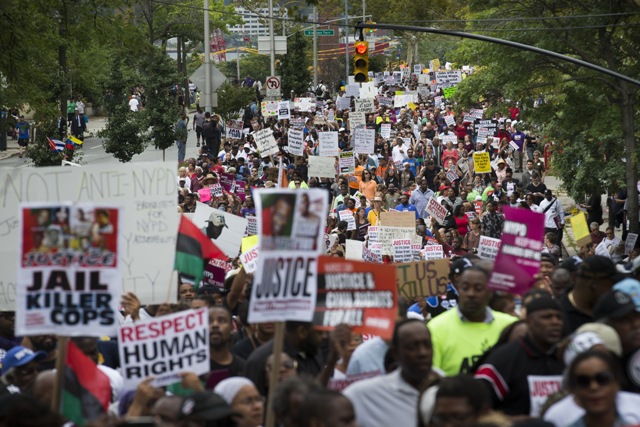 In this Aug. 23, 2014 file photo, demonstrators march to protest the death of Eric Garner in the Staten Island borough of New York. An attorney for Officer Daniel Pantaleo, a New York City police officer involved in the chokehold death of Garner, said he spent about two hours on Friday, Nov. 21, 2014, giving his account of the videotaped death of Garner to a grand jury. (AP Photo/John Minchillo, File)

NEW YORK (AP) — A New York City grand jury cleared a white police officer Wednesday in the videotaped chokehold death of an unarmed black man who had been stopped on suspicion of selling loose, untaxed cigarettes, a lawyer for the victim's family said.

The decision in Staten Island not to indict Officer Daniel Pantaleo threatened to add to the tensions that have simmered in the city since the July 17 death of Eric Garner — a case that sparked outrage and drew comparisons to the fatal police shooting of 18-year-old Michael Brown in Missouri.

Jonathon Moore, an attorney for the victim's family, said he was told of the grand jury's decision.

"I am actually astonished based on the vidence of the video tape, and the medical examiner, that this grand jury at this time wouldn't indict for anything, is really just astonishing," Moore said.

The grand jury could have considered a range of charges, from a murder charge to a lesser offense like reckless endangerment.

A video shot by an onlooker and widely viewed on the Internet showed the 43-year-old Garner telling a group of police officers to leave him alone as they tried to arrest him.

Pantaleo responded by wrapping his arm around Garner's neck in an apparent chokehold, which is banned under NYPD policy. The heavyset Garner, who had asthma, was heard repeatedly gasping, "I can't breathe!" A second video surfaced that showed police and paramedics appearing to make no effort to revive Garner while he lay motionless on the ground. He later died at a hospital.

As with Brown's death in the St. Louis suburb of Ferguson, the Garner case sparked protests, accusations of racist policing and calls for federal prosecutors to intervene. But unlike the Missouri protests, the demonstrations in New York remained mostly peaceful. The case also prompted Police Commissioner William Bratton to order officers at the nation's largest police department to undergo retraining on use of force.

The medical examiner ruled Garner's death a homicide and found that a chokehold contributed to it. A forensic pathologist hired by Garner's family, Dr. Michael Baden, agreed with those findings, saying there was hemorrhaging on Garner's neck indicative of neck compressions.

Police union officials and Pantaleo's lawyer have argued that the officer used a takedown move taught by the police department, not a chokehold, because he was resisting arrest and that Garner's poor health was the main reason he died.

There was no immediate comment from Pantaleo's attorney nor the Patrolmen's Benevolent Association, a union that has strongly backed the officer.