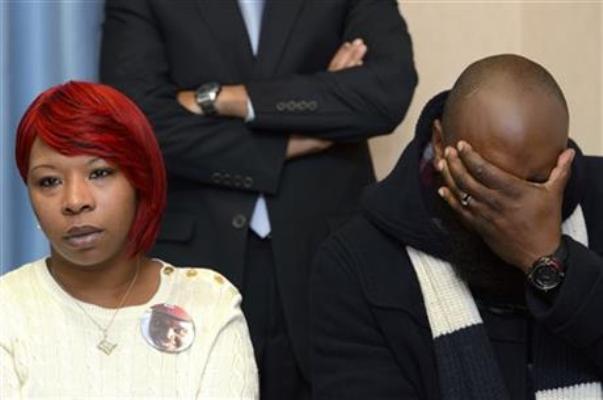 Lesley McSpadden, left, and Michael Brown, Sr., right, parents of teenager Michael Brown who was shot by a policeman in Ferguson, Missouri, speak during a press conference about the UN Committee Against Torture who convenes this week to evaluate the US government's compliance with the Convention Against Torture, in Geneva, Switzerland, Wednesday, Nov. 12, 2014. (AP Photo/Keystone, Martial Trezzini)

EDITORS NOTE: Interesting to remember that Stokely Carmichael proposed going to the United Nations to expose US human rights violations against African Americans  back in the 1960s. It's funny how things go in circles.

GENEVA (AP) — A U.N. panel began grilling American officials Wednesday over the U.S. government's compliance with a key anti-torture treaty, raising a series of alleged violations since the 9/11 attacks.

At the start of a two-day hearing, Alessio Bruni of Italy, one of the panel's chief investigators, told the high-level U.S. delegation that it must answer for alleged violations ranging from CIA rendition at so-called black sites to police brutality and Guantanamo Bay conditions. He asked what concrete measures have been taken to implement President Barack Obama's "clear" directives against torture.

A day earlier, the committee took private testimony from death penalty experts, anti-torture activists, former Guantanamo Bay detainee Murat Kurnaz and the parents of Michael Brown, the victim in the Ferguson, Missouri, shooting case that has riveted a nation. A decision is expected later this month about whether Ferguson officer Darren Wilson, who is white, will face criminal charges for fatally shooting Brown, 18, who was black and unarmed.

"We came here to the U.N. to get justice for our son," the 18-year-old's father, Michael Brown Sr., told reporters after the panel concluded its first day of questioning — a two-hour session that did not include any specific comments about the Ferguson case. U.S. government officials return Thursday to provide the panel with some answers.

Mary McLeod, the State Department's acting legal adviser, conceded the U.S. record since the 9/11 attacks "did not always live up to our own values," including those it is obliged to uphold under the treaty, which took effect in 1987. The United States signed onto the treaty in 1988 and ratified it in 1994.

The Obama administration officials said that whatever transgressions occurred had been under the previous administration of George W. Bush, but Obama that had quickly tried to turn things around.

"As President Obama has acknowledged, we crossed the line and we take responsibility for that," McLeod said. "The United States has taken important steps to ensure adherence to its legal obligations."

Tom Malinowski, an assistant U.S. secretary of state, told the committee the government believes torture, and cruel, inhuman and degrading treatment and punishment "are forbidden in all places, at all times, with no exceptions."

In Washington, the White House said the administration also now considers the ban against torture to apply to prisoners held by the U.S. overseas, including Guantanamo Bay. Under the Bush administration, the U.S. interpreted the U.N. Convention Against Torture to apply only within U.S. borders