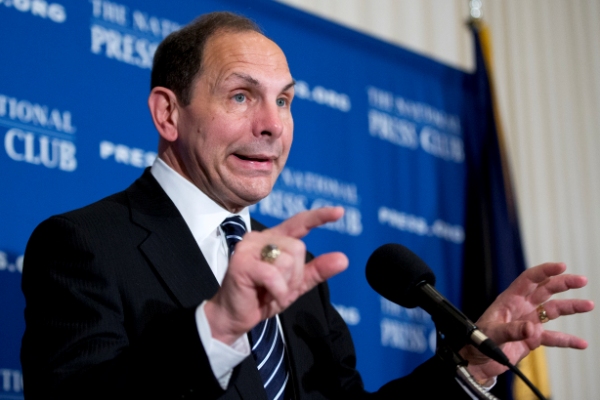 WASHINGTON (AP) — On the eve of Veterans Day, the Veterans Affairs Department announced a reorganization Monday designed to make it easier for veterans to gain access to the sprawling department and its many websites.

VA Secretary Robert McDonald called the restructuring the largest in the department's history and said it will bring a singular focus on customer service to an agency that serves 22 million veterans.

"As VA moves forward, we will judge the success of all our efforts against a single metric: the outcomes we provide for veterans," McDonald said. The VA's mission is to care for veterans, "so we must become more focused on veterans' needs," he said.

As part of the restructuring the department will hire a chief customer service officer and create a single regional framework that will encompass all aspects of the agency, from health care to benefits, loan centers and even cemetery plots, McDonald said. The VA now has nine organizational maps and at least a dozen websites, many with their own user names and passwords.

Eventually, McDonald would like all veterans to have one user name and password for all VA services.

McDonald, a former CEO of consumer-goods giant Procter & Gamble, has been pushing to refocus the VA on customer service since taking over the troubled agency in July, following a scandal over long patient wait times for veterans seeking health care and widespread falsification of records by VA employees and managers to cover the delays.

McDonald has been urging VA employees to refer to veterans as customers and to refer to him as "Bob," rather than "Secretary." He also has given out his cell phone number to reporters and veterans like and urged them to call him with questions and suggestions.

The VA has been under intense scrutiny since a whistleblower reported that dozens of veterans may have died while awaiting treatment at the Phoenix VA hospital, and that appointment records were manipulated to hide the delays. Since then problems have been revealed at VA health care sites across the country.

The scandal led to the ouster of former VA Secretary Eric Shinseki and to a new law making it easier for veterans to get VA-paid care from local doctors.

McDonald hopes to complete the reorganization, nicknamed "MyVA" within a year.