The South: Solid Once Again -- for Republicans 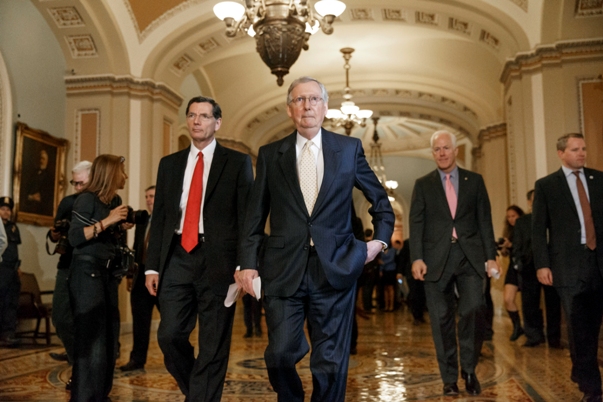 In this Sept. 16, 2014 file photo, Senate Minority Leader Mitch McConnell of Ky., center, flanked by Sen. John Barrasso, R-Wyo., left, and Senate Minority Whip John Cornyn of Texas, right, arrive for a news conference on Capitol Hill in Washington. All along, the biggest question this election was whether Republicans could take over the Senate and add it to their solid House majority. Republicans need to gain six net seats to do so. Three, in states where Democrats are retiring, seem nearly certain: West Virginia, Montana and South Dakota. Republicans’ chief targets elsewhere are Democrats running for re-election in states that President Barack Obama lost: Alaska, Louisiana, Arkansas and North Carolina. Three other possibilities _ Iowa’s open seat, and strong challenges to Democratic senators in Colorado and New Hampshire _ give Republicans multiple paths to a Senate majority. (AP Photo/J. Scott Applewhite, File)

ATLANTA (AP) — With the walloping Republicans gave Democrats in the midterm elections, the GOP stands one Louisiana Senate runoff away from completely controlling Southern politics from the Carolinas to Texas. Only a handful of Democrats hold statewide office in the rest of the Old Confederacy.

The results put Southern Republicans at the forefront in Washington — from Senate Majority Leader-in-waiting Mitch McConnell of Kentucky to a host of new committee chairmen. Those leaders and the rank-and-file behind them will set the Capitol Hill agenda and continue molding the GOP's identity heading into 2016.

In statehouses, consolidated Republican power affords the opportunity to advance conservative causes from charter schools and private school vouchers to expanding the tax breaks and incentive programs that define Republican economic policy. The outcome also assures that much of the South, at least for now, will remain steadfast in its refusal to participate in President Barack Obama's health care overhaul.

"I think these new leaders can help drive the conservative movement" at all levels, said Louisiana Republican Party Chairman Roger Villere, echoing the celebrations of Republican leaders and activists across the region. "We just want a government that doesn't suppress people."

Republicans widely have acknowledged that the party now has to prove it can govern. But one-party rule invariably means internal squabbles. Republican White House hopefuls in particular must court Southern Republicans who are more strident than the wider electorate on issues ranging from immigration to abortion and the broader debate over the government's role — and how to pay for it.

"The Republican presidential nomination will run through the South," said Ferrel Guillory, a Southern politics expert based at the University of North Carolina. "As Mitt Romney found (in 2012), that ... makes it harder to build a national coalition once you are the nominee."

Republicans reclaimed the governor's mansion in Arkansas and held an open Senate seat in Georgia that Democrats targeted aggressively.

In January, the GOP will control every governor's office, two U.S. Senate seats, nearly every majority-white congressional district and both state legislative chambers in North Carolina, South Carolina, Georgia, Alabama, Tennessee, Mississippi, Arkansas and Texas. Landrieu and Florida Sen. Bill Nelson are the only officials keeping their states from the list. At the northern periphery of the South, Kentucky's Legislature remains divided, and Democratic governors in Kentucky and West Virginia are in their final terms.

The regional differences in the GOP could make it more difficult for McConnell to deliver on his declaration Tuesday night that "just because we have a two-party system doesn't mean we have to be in perpetual conflict."

McConnell and Obama have both said since Tuesday they'll make attempts to find common ground on a range of issues. But elsewhere on election night, Sessions declared in Alabama, "Tonight the American people dramatically repudiated the policies of President Obama. ... It was also a dramatic affirmation of the policies our GOP candidates." Sen.-elect David Perdue of Georgia struck a similar chord: "Georgia made it loud and clear ... that we are going to stop the failed policies of President Obama and Sen. Harry Reid."

The region also is home to Texas Sen. Ted Cruz and Kentucky Sen. Rand Paul, both presidential hopefuls and tea party favorites who have strengthened their absolute approaches, particularly on budget deals.

In Louisiana, Villere rejected the notion that Southerners could complicate Republican policies and electoral fortunes in the long-term. "Whether it was the old Southern Democrats or Republicans now, we've pushed the liberal wings of the parties for a long time," Villere said. "I think it's good for the party and for the country."