What to Expect With Legal Marijuana 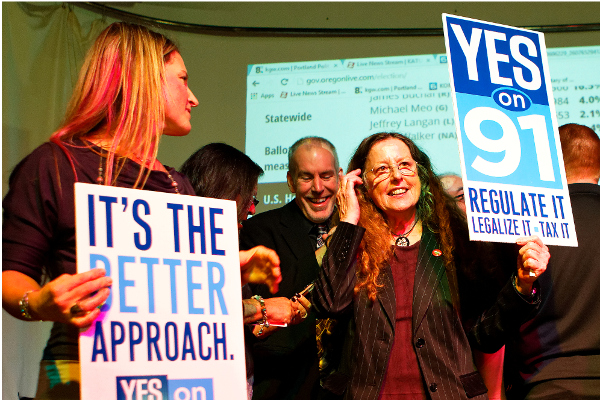 Oregon, Alaska and Washington, D.C., voted to legalize recreational marijuana Tuesday. The drug is already legal for people 21 and older in Colorado and Washington, thanks to ballot measures voted on in 2012.

It was a whole new frontier for those states, so here are some hints from the legal weed states on what the new places can expect:

UNCLE SAM IS (MOSTLY) LOOKING THE OTHER WAY

Some expected a federal lawsuit when Washington and Colorado flouted federal drug law, which considers pot illegal for any purpose. But last summer, the U.S. Justice Department said it wouldn't interfere with state marijuana laws as long as the states tightly regulate the drug and make efforts to keep it from children, criminal drug cartels and other states. There have since been isolated federal raids on pot businesses in Colorado, but no widespread federal crackdown on the industry in either state.

LEGAL POT BRINGS IN SOME GREEN

Pro-marijuana advocates predicted that legal weed would be a huge windfall for Washington and Colorado. Marijuana opponents predicted the drug would prove a drain on state finances because of higher law enforcement costs. Both sides were wrong. Colorado is on track to bring in some $84 million this year from medical and recreational pot taxes and fees. Washington by some estimates will it bring in more than $50 million between 2015 and 2017. That's not chump change, but in the mix of multibillion-dollar state budgets, legal pot isn't exactly a game-changer.

Washington and Colorado both had to create a raft of new crimes when pot became legal. That's because when weed was illegal for all, there was no such thing as, say, the crime of providing weed to someone under 21. The new legal weed states will need hundreds of pages of new ordinances governing how and where marijuana can be produced, sold and consumed.

Colorado and Washington both have seen an uptick in drivers testing positive for marijuana. But traffic fatalities in both states are down. Marijuana proponents and opponents argue about whether the increase is a result of more testing, or whether more folks are driving high. There's still no widely available roadside pot test similar to an alcohol breath test, though saliva tests are in development. Convictions for driving stoned in Colorado and Washington for now rely on blood tests.

NOT CLEAR WHETHER OVERALL POT USE GOES UP

Though it's been two years since Colorado and Washington legalized weed, it's too soon to say whether more people are using it. That's because drug use is gauged by survey responses, so changes take time to show up in public health metrics. All eyes will be on 2015's "Monitoring The Future" survey, a federal youth assessment of risky behaviors. Next year's is the first post-legalization survey to include state-specific data. Both states have increased marijuana-related admissions to hospitals and substance abuse treatment facilities, but marijuana remains a small fraction of admissions.

Some wondered whether widely available pot would have people replacing cocktails with joints. But according to alcohol-tax receipts in both states, legal weed appears to have little impact on how much alcohol people drink.