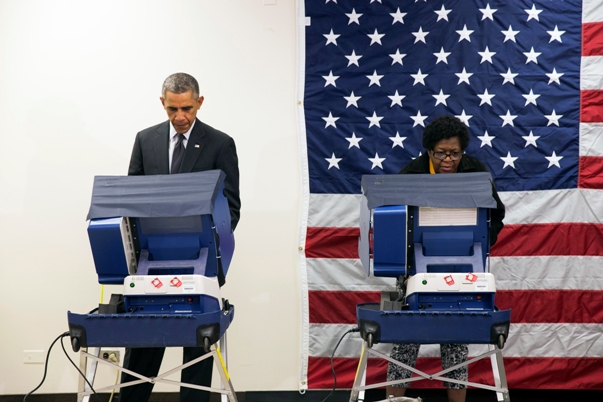 In this Oct. 20, 2104 file photo, President Barack Obama votes early for the midterm election at the Dr. Martin Luther King Community Service Center in Chicago. President Barack Obama is hitting the black radio airwaves to plead for midterm votes, a targeted approach to drumming up Democratic support at a time when many candidates don’t want him around in person. Black turnout will be vital if Democrats are to hope for victory in states like Arkansas, Georgia, Louisiana and North Carolina that will help determine control of the Senate. And Obama remains beloved among black voters even if candidates in those races are running away from him amid low approval ratings overall. (AP Photo/Evan Vucci, File)

WASHINGTON (AP) — Public campaigning gave way to the privacy of the voting booth Tuesday with control of the Senate, the makeup of the House and three dozen governorships at stake.

President Barack Obama, his approval ratings low, was not on the ballot midway through his second term. But even he said his policies were, and Republicans rushed to agree.

"The president's policies have just flat-out failed," House Speaker John Boehner said Monday, campaigning for a 13th term in Congress and hoping for two more years as top House leader. He and other Republicans vowed to change Obama's policies, but have offered little in the way of specifics.

Democrats didn't so much defend the president as insist they were independent of him.

"There are two people on the ballot tomorrow, me and Scott Brown," Sen. Jeanne Shaheen of New Hampshire said as she made the rounds of six campaign stops on the race's final full day.

The main prize in a $4 billion campaign was control of the Senate, a contest that sprawled across three dozen states and spawned attack ads beyond counting.

A large number of competitive races combined with the possibility of runoffs in Louisiana and Georgia meant that neither party might be able to claim victory by the day after Election Day.

About 10 Senate races drew most of the attention.

In Kentucky, Senate Republican leader Mitch McConnell squared off with Democrat Alison Lundergan Grimes in a race that cost more than $50 million and was relentlessly negative.

Democratic retirements gave Republicans their best pickup opportunities in Montana, South Dakota and West Virginia, where Rep. Shelly Moore Capito hopes to become the first member of her party to win a Senate seat in more than a half-century.

A Republican retirement in Georgia led to one of the country's most closely-watched races, between Democrat Michelle Nunn and Republican businessman David Perdue.

Democratic incumbents in states that Obama lost in 2012, including Alaska, Arkansas, Louisiana and North Carolina, faced strong challenges. The same was true in states the president won two years ago, Colorado and New Hampshire.

The wildest wild card of all was Kansas, where 78-year-old Republican Sen. Pat Roberts is in a competitive race with independent Greg Orman.

Republicans expressed optimism about their overall chances to win control of the Senate, while Democrats countered that a costly get-out-the-vote program to encourage millions of blacks, young voters and women to vote could save their majority.

The spreading popularity of early voting produced the equivalent of an election within an election.

Early voting topped 18 million ballots in 32 states, and both parties seized on the number as evidence of their own strength.

In Wisconsin, early ballots exceeded the number from the midterms in 2010, evidence of high voter interest in the race between Republican Gov. Scott Walker and Democratic challenger Mary Burke.

There was little suspense about House races, beyond the size of the new Republican majority. A gain of 13 seats would give the GOP its largest representation since it stood at 246 in 1946.

All 435 House seats were on Tuesday's ballot. Democrats concentrated on protecting their incumbents, a strategy that meant tacitly conceding races in Utah, New York and North Carolina where retirements created opportunities for Republicans to pad their majority.

"Not one of our incumbents is down or out," said New York Rep. Steve Israel, who heads House Democrats' campaign organization.

There were 36 gubernatorial contests, and an unusual number of incumbents appeared to be struggling heading into the election.

Obama had raised millions of dollars for Democratic candidates over the past two years, but candidates in state after state decided not to be photographed by his side. Obama was in eight states in the campaign's final days, hoping to help gubernatorial candidates in Maryland, Illinois, Connecticut, Rhode Island, Pennsylvania, Wisconsin, Michigan and Maine.

The races played out against a backdrop of changes in election law in some states.

Republicans said they were designed to prohibit voting fraud. Democrats said the changes were aimed at discouraging minority voters from casting ballots.

The elections were the last act of a campaign that featured a primary season in which establishment Republican candidates went head-to-head with tea party challengers in several states.

Not a single Senate Republican lost a primary, easing fears of party leaders who worried about a replay of 2010 and 2012. Both times the GOP lost seats that were winnable — and a chance at a Senate majority — because unelectable candidates made it through the primary only to lose on Election Day.