State Ballot Measures Across The Nation: 5 Things To Watch 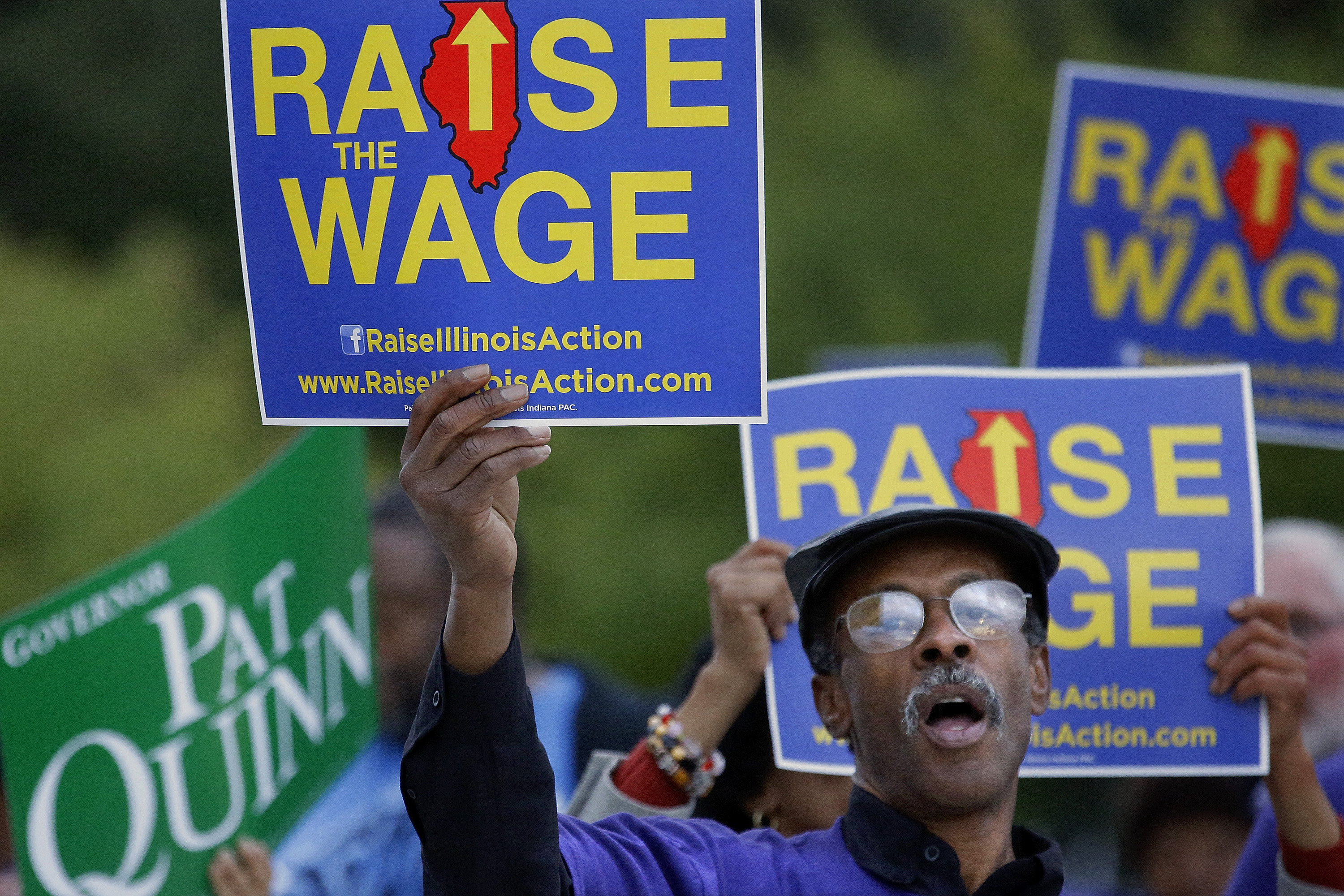 In this Thursday, Oct. 9, 2014 photo, supporters of raising the minimum wage rally outside where Democrat Illinois Gov. Pat Quinn and Illinois Republican gubernatorial candidate Bruce Rauner have their first televised debate in Peoria Ill. When Illinois voters cast ballots this year, they won't just get a chance to weigh in on a nationally watched governor's race. They also will have to wade through a record five ballot questions ranging from proposed constitutional amendments on voter rights and victim rights to poll-style referendum questions on birth control, a minimum wage hike and a proposed new tax on millionaires. (AP Photo/Seth Perlman)

NEW YORK (AP) — A total of 147 ballot measures will go before voters on Election Day, according to the National Conference of State Legislatures. The topics range from marijuana legalization and abortion to food labels and gun sales.

Some of the notable measures:

Is pot on its way toward nationwide acceptance? Voters in Alaska, Oregon and Washington, D.C., will have their say as they weigh in on measures that would allow recreational use of pot by adults. "Yes" votes would build on the momentum of the 2012 general election, when Washington state and Colorado became the first states to legalize marijuana. The measures in Oregon and Alaska would allow retail sales of pot to anyone old enough to drink. The measure in the District of Columbia would make it legal to grow and possess marijuana, but not sell it.

In Florida, voters will decide whether to make their state the 24th to allow marijuana use for medical reasons. That measure, which needs 60 percent approval to pass, has divided the rivals in Florida's closely contested gubernatorial race. Republican Gov. Rick Scott opposes the measure, Democrat Charlie Crist supports it.

Three measures related directly or indirectly to abortion have sparked bitter debate, in part because each side disagrees over the potential impact.

In Colorado, a "personhood" amendment would add fetuses to those protected by the state's criminal and wrongful death act. Opponents say it could lead to a ban on abortions; supporters say it's intended to strengthen protections for pregnant women.

In North Dakota, Measure 1 would provide "the inalienable right to life" for humans at "any stage of development." Supporters and opponents differ on what impact it might have on abortion regulations.

A measure in Tennessee would give state legislators more power to regulate abortion. Supporters say the proposed amendment is needed to protect existing regulations. Opponents fear it would make it easier for Tennessee to adopt tough new laws that would jeopardize women's access to abortions.

There's been a huge expansion of casino gambling across the country in recent decades.

Massachusetts voters have a rare chance to say, "Enough." A ballot measure there would repeal a 2011 law authorizing development of a slots parlor and up to three resort casinos. The state has none now.

According to one expert, Clyde Barrow of the University of Texas-Pan American, a victory for the anti-casino forces would mark the first time — at least since the modern era of U.S. gambling began in 1931 — that a state reversed a major legislative decision to expand gambling.

The would-be casino developers are making vigorous pitches to keep their projects on track. For example, Wynn Resorts is promising to spend at least $30 million on cleanup efforts as part of its plans to turn a polluted former chemical plant near Boston into a $1.6 billion resort.

With two competing gun-related measures on their ballot, voters in Washington state have an unusual opportunity to sound off in the national debate over firearms.

One measure seeks background checks for all gun sales and transfers, including private transactions. The other would prevent any such expansion covering purchases from private sellers. Supporters of the expanded checks, aided by gifts from Microsoft co-founders Bill Gates and Paul Allen, have spent far more than the anti-expansion campaign.

Six states require universal background checks for all sales and transfers of firearms. Washington's law, like the federal law, requires checks for sales or transfers by licensed dealers but not for purchases from private sellers.

Colorado and Oregon have measures that would require labeling of certain genetically modified foods. Each proposal would apply to raw and packaged foods produced entirely or partially by genetic engineering, but would not apply to food served in restaurants.

Opponents of the requirements, including food corporations and biotech companies, say mandatory labels would be costly and would mislead consumers into thinking engineered ingredients are unsafe, which scientists have not proved. Supporters of the measures, who have been outspent in both campaigns, say consumers have a right to know if the food they eat has been genetically modified.

In Oregon, it's become the costliest ballot measure campaign in state history, with the two sides raising more than $23 million as of a week ago. Opponents of labeling outraised supporters by more than 2-to-1.

Similar measures in California and in Washington state failed narrowly in recent years after millions of dollars were spent, mostly by labeling opponents.