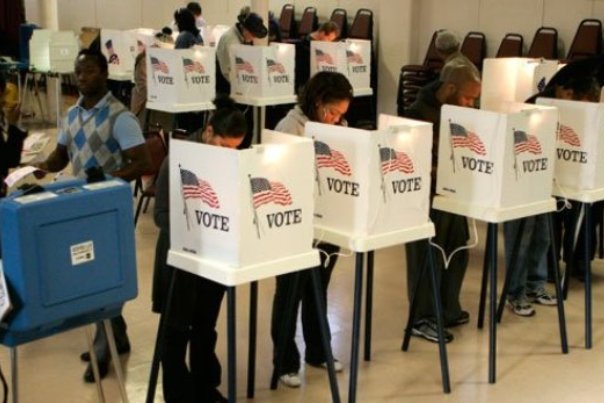 As voters prepare to cast ballots in the first general election since the Supreme Court shredded a key provision of the Voting Rights Act with the Shelby County v. Holder decision, civil rights groups are gearing up to make sure those voters can still cast ballots. Photo courtesy NNPA

WASHINGTON (NNPA) – As voters prepare to cast ballots in the first federal general election since the United States Supreme Court shredded a key provision of the Voting Rights Act of 1965 with the Shelby County v. Holder decision, civil rights groups are gearing up to make sure those voters can still cast ballots.

Under Section 5 of the VRA, states and jurisdictions with egregious histories of racial voting discrimination were prohibited from changing any voting laws without “pre-clearing” the changes with the Department of Justice. Section 4 of the VRA determined the pre-clearance formula and which states, most of them in the South, were covered.

During a press briefing with reporters, Penda Hair, co-director for the Advancement Project, a multi-racial civil rights group, said that protecting voters from discrimination under Section 5 was a really effective practice and it stopped states from moving the ball all the time as they attempted to block poor and Black voters away from the ballot box.

Hair said that Section 5 resulted in many objections over the years, but it also trained the states to do things right because they knew if they submitted some questionable voting law change that they would be rejected.

In last summer’s Shelby County v. Holder decision, even though the Supreme Court acknowledged that racial discrimination in voting still existed, it ruled that the formula (Section 4) that was used to determine which states were covered was unconstitutional, effectively ending protection for voters under Section 5.

“The Shelby decision seemed to open the floodgates to discriminatory voting practices that the states had been wanting to implement but knew that they could never get them cleared by the Department of Justice,” said Hair. “Even before the ink was dry on the Shelby decision, North Carolina and Texas moved very aggressively to cut back on voting rights.”

Hair said that the Advancement Project, representing the North Carolina’s branch of the National Association for the Advancement of Colored People (NAACP) and other individual plaintiffs, sued the state of North Carolina within 20 minutes after Republican Governor Pat McCrory signed the voting rights bill.

“We call it the ‘monster bill’ because it is more comprehensive in its evilness than most of the other laws,” said Hair. “It went after everything.”

The North Carolina voting law cut same-day registration during early voting, ended pre-registration for 16 and 17 year-olds, restricted straight ticket voting and out-of-precinct voting, and installed a strict voter ID provision, that will negatively impact the poor and Black voters in the state.

Since the Shelby v. Holder decision, the Department of Justice has filed lawsuits in Texas and North Carolina challenging the states’ new voting laws. The Justice Department also sued Texas over 2011 redistricting plans that diluted the voting power of minorities in the Lone Star State.

Rev. William Barber, the president of the NAACP’s North Carolina branch and the leader of the Moral Monday Movement, said that when African Americans started winning seats in the state legislature, conservative lawmakers led by Rep. Thom Tillis (R-N.C.), the speaker of the House, perverted the intent of the Voting Rights Act and “committed to stack, pack and bleach African American voters” using redistricting plans that shifted 52 percent of the Black voters into 27 out of 120 House districts and 49 percent of African Americans into 19 out of 50 Senate districts, “creating a brand new Apartheid-type voting patterns” that prevented Blacks and progressive Whites from forming fusion coalitions to elect the candidates of their choice.

Even though Black voter turnout reached historic levels in North Carolina in 2012, Barber said that conservatives were still able to win a super-majority, partly due to how the voting map was drawn.

Barber said that what happened in N.C. is full proof of why the state needs a Section 4 fix, adding that an updated Section 4 must cover all states that were previously covered.

Barber said that more than 42 percent of Blacks use same-day registration during early voting and that an even higher percentage use out-of-precinct voting.

Barber expressed concerns that people are going to show up to the wrong precincts to vote, while others will assume that they can still do same-day registration, because they’ve been doing it for three election cycles.

“What this general assembly did is take away from citizens an extension and expansion of the franchise of the voting that they had already experienced and expect,” said Barber.

Johanna Berkson, executive director of OurTime.org, a nonprofit group that empowers and mobilizes young people to address voting reform, college affordability, equal rights, and job opportunities, said that 45 percent of eligible voters,18-29 years-old, showed up at the polls in 2012, but only 22 percent voted in 2010.

“[We’re not] kidding ourselves,” said Berkson. “We know that the midterms are really tough to get young Americans out to vote.”

The group will spend the last days before the midterm elections focusing on “pledge to vote” efforts and connecting with registered voters 18-29 years-old, because registered voters are more likely to cast ballots.

In an effort to engage voters, the North Carolina branch of the NAACP hosted a state convention where 75 counties were and printed 200,000 voter guides. Barber’s group will also use robocalls to reach 286,000 Black voters that voted in 2008 and 2012, but didn’t vote in 2010.

Hair said that in some states like North Carolina and Ohio civil rights groups might see the impact of the cutbacks on voting rights during the midterm elections, but they will have to wait until the next presidential election in 2016 to see the full impact.

“If there are long lines or not in North Carolina and Ohio, this cycle does not answer the question of whether or not the voting rights laws would violate the Voting Rights Act during a presidential election,” said Hair.

Katherine Culliton-González, the director of voter protection at the Advancement Project, said that due to the floodgates that have opened since the Shelby decision, the way that politicians are manipulating rules for their own convenience, litigation alone isn’t going to protect our voter rights.

Culliton-González added that on election day, the Advancement Project’s voter protection team will be on the ground in Florida, Virginia, North Carolina, Ohio, Pennsylvania, Missouri and Wisconsin to protect voting rights and address the needs of voters in real time while gathering information for current and future litigation.

Last year, Culliton-González said that the Advancement Project worked with members of the Black legislative Caucus in Florida to introduce a constitutional “right to vote” bill that was also supported by the Latino caucus. Culliton-González called the specific fundamental right to vote “a good long-term fix” for problems associated with voter suppression and discrimination.

“If you disagree with tax policy or Medicaid policy or you like Obamacare or don’t like Obamacare, you can vote and make your voice heard,” said Hair. “When they take away your right to vote or when they make your right to vote more difficult to exercise or when they redistrict in such a way that even if you do vote there’s very little chance that you can actually elect a person that will represent your interest, then I really am terrified that the fundamental democracy is at stake and is threatened and that’s what I see happening right now.”

“If you disagree with tax policy or Medicaid policy or you like Obamacare or don’t like Obamacare, you can vote and make your voice heard,” said Hair. “When they take away your right to vote or when they make your right to vote more difficult to exercise or when they redistrict in such a way that even if you do vote there’s very little chance that you can actually elect a person that will represent your interest, then I really am terrified that the fundamental democracy is at stake and is threatened and that’s what I see happening right now.”

Hair continued: “When you see this happening in so many states across the country, where redistricting is being layered with voter restrictions, then it really thwarts the ability of the majority of the people in this country to govern and that’s the intent: to allow a minority to govern indefinitely. And, that to me, is terrifying.”