NEW YORK (AP) — Soaring inflation. A collapsing dollar. Bubbles in financial markets that would soon pop. One presidential candidate even suggested that the Federal Reserve chairman should be roughed up.

Over the past five years, as the Fed has pumped ever-more money into the financial system, critics have warned that it would lead to all kinds of disasters. Yet the central bank kept extending its bond-buying program, known by the wonky name of quantitative easing, or QE. It was an unprecedented effort aimed at lowering borrowing costs, encouraging spending and reviving a dormant economy before it could slip back into recession.

Now, $4 trillion later, QE is drawing to a close, so the question is: Did it work?

Economists have plenty of quibbles, but many agree that the Fed accomplished the bulk of its goals.

"Look at us now," says Anthony Chan, chief economist for Chase Private Client in New York. All of the jobs lost during the financial crisis have been recovered. The stock market has more than doubled, and inflation has remained tame.

"I have to say it was a pretty impressive success," Chan says. "But other people define success differently."

At the tail end of 2008, the Fed cut its benchmark short-term lending rate to a record low to spur growth, then made an historic move. It began the first round of QE, buying $100 billion in bonds backed by mortgages every month. The Bush administration had already hatched a number of rescue programs aimed at patching up the banking system, and so the Fed's initial step met little resistance.

Liz Ann Sonders, the chief investment strategist at Charles Schwab, compared the Fed's action to a famous scene in the movie "Pulp Fiction" when Vincent, played by John Travolta, revives a woman near death.

"It was like Travolta slamming the needle into her heart," Sonders says. "It was clearly the right thing to do."

The Fed's second round of quantitative easing, dubbed QE2, received a hostile reception.

In late August 2010, the economy had slowed to a crawl, and the big worry was deflation — a dangerous spiral of falling prices and wages. During a speech that month in Jackson Hole, Wyoming, Fed Chairman Ben Bernanke outlined a turnaround plan.

QE3 followed the next year, and the heated rhetoric increased.

John Boehner, the speaker of the House, argued that the Fed risked creating "hard-to-control" inflation, a weak U.S. dollar and market bubbles. After entering the presidential campaign in 2011, Texas Gov. Rick Perry said that it would be "almost treasonous" if Bernanke "prints more money" ahead of the election. Perry told an Iowa crowd "we would treat him pretty ugly down in Texas."

Here's what has actually happened since Bernanke made the case for the Fed's expanded effort in August 2010:

— The stock market has soared. The Standard & Poor's 500 index has returned 101 percent, powered by a stronger economy, higher spending and record corporate profits.

— The dollar has held up against most major currencies. One widely used measure, the dollar index, is 3 percent higher.

— Inflation has remained tame, despite all the warnings. Over the past year, overall prices have climbed a modest 1.7 percent, still below the 2 percent annual increase that the Fed targets.

To be sure, the Fed's efforts merely contributed to all the good things listed above. But none of the predicted disasters came true. So how did the loudest critics get it so wrong?

A common warning was that the policies would erode the dollar's value and cause investors to look for a replacement, like gold or the Swiss franc.

Chan says a flaw in this thinking was that it failed to consider that other countries would struggle, too. When investors worried that Greece's debt troubles could tear apart Europe, for instance, they rushed to buy dollars and U.S. Treasury bonds, still considered the world's haven.

Long-term interest rates in the U.S. may be low, but sluggish growth across the industrialized world means government bond rates in Japan and Germany are even lower. As a result, foreign banks and investors keep buying U.S. bonds, stoking demand for dollars.

"How fast is your country growing, and what are its interest rates relative to the rest of the world? Those are the key things that determine a currency's strength," Chan says. "Guess what? We're now growing faster than Europe. Our success means our dollar should get stronger." 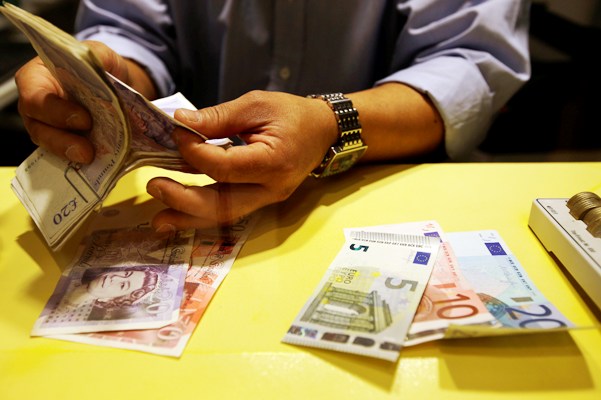 PHOTO: An employee counts British pounds and Euro notes at a currency exchange office in downtown Rome, Tuesday, Oct. 28, 2014. Economists have plenty of quibbles, but many agree that the Federal Reserve accomplished the bulk of its goals with its bond-buying program, known as quantitative easing, or QE. The dollar has actually held up against most major currencies, as the euro and Japanese yen have slumped. (AP Photo/Gregorio Borgia)

Critics also predicted that the Fed would create runaway inflation, a result of pumping so much money into circulation. It was a popular idea, based on the common-sense notion that a flood of dollars would make the greenback cheap.

In reality, much of the money never saw daylight. When the Fed bought bonds from big banks, it gave them an electronic credit on their accounts at the Fed. Starting in the financial crisis, the central bank paid interest on those reserves, so big banks could just sit on the money. Excess bank reserves soared from $800 billion at the start of 2009 to $2.7 trillion today.

"The criticisms of QE were clearly overblown," says Dean Baker, co-director of the Center for Economic and Policy Research, a liberal think tank based in Washington. "The flip side is that the benefits were exaggerated, too."

The Fed has been scaling back its bond buying this year. It said at its September meeting that it plans to shut down the program after buying a final $15 billion in securities this month — as long the economy keeps improving. Even if the central bank goes ahead and announces the end of the purchases on Wednesday, it will be left with a $4.5 trillion balance sheet that will keep putting pressure on long-term rates.

At the moment, the Fed has said it plans to maintain its holdings at that level. When it does begin to reduce its portfolio, it will do so in a "gradual and predictable manner" by ceasing to re-invest maturing bonds. However, it has left many questions about how it will unwind its balance sheet unanswered.

It is also keeping markets guessing about another big question: When exactly will it start hiking its benchmark lending rate? That move is expected at some point next year.

Many on Wall Street have faith that the central bank will raise interest rates slowly enough to not derail the recovery.

"I'm less worried because I see all the progress," Chan says. "Could the economy lose momentum? Sure. It's like when you get off crutches. You're a little uneasy at first."

But some economists still worry that the economy won't be ready when the Fed decides to start raising rates. "The logic of a rate hike is that employment is taking off and the Fed needs to cool the economy down," says Baker. "We're so far from that."

Even some optimists expect more market turbulence as the Fed moves closer to its first interest rate hike since 2006.

Schwab's Sonders notes that economists and market strategists can usually find similar situations in the past and use them to guide projections. But history offers little guidance for the months ahead. The Fed has never wrapped up a $4 trillion stimulus program and has no experience raising rates from zero.

"Usually you can ask, 'When's the last time the Fed did this?'" Sonders says. "But, no, there is no last time."