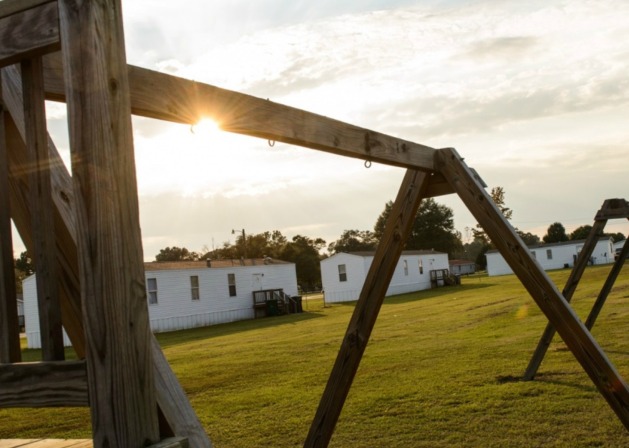 NEW YORK (NNPA) – Black Americans old enough to recall the shock of seeing and hearing what had happened to Emmett Till in Mississippi in 1955 are sure to get a fresh whiff of the atrocity in learning about the tragedy of Lennon Lacy in Bladenboro, N.C.

Lacy, 17, was found hanging from a swing set in the middle of a trailer park near the end of August, the same month Till was killed [Aug. 28, 1955].  If Till’s murder was not deemed a suicide, the first conclusions from some neighbors and law enforcement officials was that the body fished from the Tallahatchie River in 1955 wasn’t him. Till’s face was left ghastly disfigured by his attackers; Lacy’s bore abrasions with a large knot on his forehead.

Till was abducted from his home in the dead of night by two White men who claimed he had whistled at the wife of one of the men.  The story about Lacy, which appeared recently in The Guardian, indicates that Lacy was seeing a White woman, almost twice his age.

It may be unnecessary to compare the two tragedies but Till’s murders, though not convicted in court, eventually confessed the crime after being offered $4,000 to tell their story in Look magazine.  We will have to wait to see how the Lacy incident unfolds since it is still under investigation.

A budding football star, Lacy had worked hard all summer to get ready for the coming season at West Bladen High School.  He had bulked up to 200 pounds with the size and muscle to make him a starting linebacker.  That dream became a nightmare for his mother when she was beckoned by the Bladenboro Police Chief Chris Hunt.

He took her to the site where her son’s body was stretched on a black body bag.

“I know my son,” she said later.  “The second I saw him I knew he couldn’t have done that to himself – it would have taken at least two men to do that to him.”  Her grief was reminiscent of the reaction Till’s mother had upon viewing her son’s battered face.

Lacy’s mother had not seen him since the day before and thought he had gone off to school that morning.  When she saw his football gear she thought he had gone to school and forgot it and was making plans to take the equipment to school when she was told he was not there. While the police had not mentioned the possibility of suicide, the implications was clear, according to The Guardian.  For them the case was virtually settled but not for the family.

At the memorial service for the young man at the family’s church, the Rev. William Barber, a noted activist and head of the state NAACP in North Carolina, said, “Don’t ask these parents to bury their 17-year-old son and then act as though everything is normal.  Don’t chastise them for asking the right questions.  All they want is the truth.”  He then touched on a subject that is part and parcel of southern terror for Black Americans.  “The image of a Black boy hanging from a rope is in the souls of all of us.  It is in the DNA of America.  In 2014, our greatest prayer is that this was not a lynching.”

But Till’s brutal murder was not exactly a lynching when his body was fished from the Tallahatchie River with a 75-pound gin fan in barbed wire round his neck.  In fact, the local white sheriff and his deputies even stated they didn’t believe it was Till.  What motivated his killers may have been the same that took Lacy’s life; he had violated an ancient racist taboo by fraternizing with a White woman.

When the The Guardian interviewed the woman, Michelle Bramhill, she invoked some of the gossip that she heard about her relationship with Lacy.  “Everybody was going on to me because he was 17 and I am 31,” she told the paper.  “We told people we weren’t seeing each other so they would stop giving us trouble.”

That apparently was just a way of throwing folks off their trail because, according to Bramhill, they continued to see each other, despite the opinion of the family that Lacy was no longer involved with her.

“We were still together,” she added. “I did not break up with him.  I had never had a man treated me as good as he did, and I probably will never find another.”  She was convinced that Lacy did not take his life.  “He loved his mother so much; he would not put her through that.”

At this point in the investigation there are many unanswered questions, and the Lacy family is concerned that Bramhill’s ex-husband has not been interrogated, though there is no current evidence to implicate him.

“If my brother wanted to take his own life,” Pierre Lacy said, “I can’t understand why he would do it such an exposed place.  This feels more like he was put there as a public display—a taunting almost.”

It has both a taunting and a haunting aspect for those who remember what happened to Emmett Till.