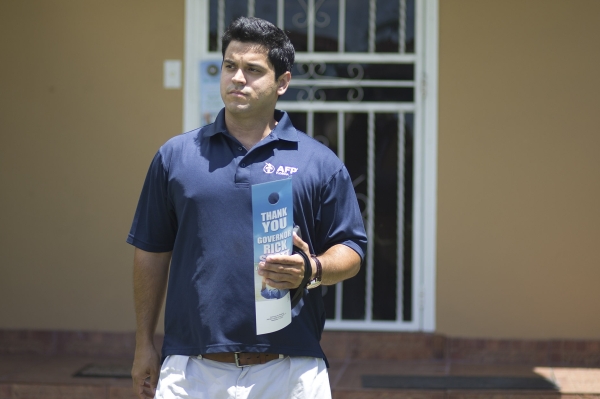 In this Aug. 12, 2014 photo, Andres Malave walks the street of a west Miami neighborhood. He started the day huddled with about a dozen volunteers in a Cuban restaurant here, offering them a last-minute pep talk before they went out to meet with voters. It’s a strategy playing out in New England diners, Midwest truck stops and West Coast cafes: coordinators for Americans for Prosperity conservative organizers train and dispatch send out hundreds or thousands of volunteers armed with an iPad and an interest in helping fellow activists shift America’s politics in their direction. These volunteers ground troops make up the backbone of Americans for Prosperity, the flagship organization of the political network overseen by industrialist billionaires Charles G. and David H. Koch. (AP Photo/J Pat Carter)

MIAMI (AP) — Over scrambled eggs and croquettes, Andres Malave gave a last-minute pep talk to about a dozen volunteers in a Cuban restaurant before they left to meet voters.

"Don't just deliver a message," he said before beginning his own 3½-hour shift knocking on doors. "Try to get them engaged."

It's a strategy playing out in New England diners, Midwest truck stops and West Coast cafes: conservative organizers train and send out thousands of volunteers holding an iPad and an interest in helping fellow activists shift America's politics to the right.

They are the backbone of Americans for Prosperity, the flagship organization of the political network backed by industrialist billionaires Charles and David Koch. While the group's spending in Senate races has attracted national attention, it's these less noticed field efforts that could have greater impact and help reshape the Republican Party heading into the 2016 presidential election.

The organization has more than 500 paid workers in 35 states and has become one of the conservative movement's best organized, most powerful outside groups. Building on the community-based approach President Barack Obama used successfully in 2008 and 2012, it now has a political footprint unmatched among GOP-affiliated operations and is racking up legislative victories.

The group scuttled efforts to raise taxes to build a downtown campus for the well-regarded zoo in Columbus, Ohio, and derailed plans in Florida's Legislature to subsidize improvements to the Miami Dolphins' football stadium. It helped fend off a recall effort against Gov. Scott Walker, R-Wis., and pushed pro-business workplace laws in Michigan and Indiana.

It didn't shy away from going after traditional allies, as was the case when Gov. Rick Scott, R-Fla., briefly considered expanding Medicaid, a core component of Obama's health care law. Americans for Prosperity mobilized supporters, the Republican-led Legislature quickly rejected the idea and Scott dropped his proposal.

Tim Phillips, the group's president, said Americans for Prosperity had helped usher in "a once-in-a-generation renaissance for economic freedom policies," and was poised to keep financial issues prominent in 2016.

"For the first time, we have the infrastructure on our side to sustain these policy battles," he said.

This fall, Americans for Prosperity is campaigning against a sales tax increase in South Carolina's Greenville County, as well as trying to elect conservatives to office. Unlike what it has done for most of this year, the group now is engaging in explicitly political messages for the campaign's final weeks.

Americans for Prosperity sprung up in 2004 but has gained heft during the past two election cycles. Its budget has grown from less than $3 million in 2004 to more than $130 million for the 2012 election cycle.

In many places, the group has more trained and paid operatives than the traditional political parties have. Nowhere is this more obvious than Florida, where the group has 10 offices, its single largest field operation.

In the group's Orlando outpost, Phillips recently met with 15 volunteers who were wearing bright green T-shirts with Americans for Prosperity's torch logo.

Using iPads, they had spent the morning asking voters to take an issues survey that included the federal health law, government spending and taxes. The information helps them develop messages and test which arguments resonate with voters.

"That doesn't mean always knocking on the door and telling people 'Obamacare' is bad," Phillips told the volunteers. "That's important, but the goal is to bring some good and build relationships over the long term."

That strategy has become central to the Koch network of organizations. This year, they are trying to help Republicans pick up the six seats they need to win control of the Senate — Americans for Prosperity spent $25 million on TV ads alone — but it is not what drives the organization.

"People say our biggest goal is a Republican Senate. Not true," Phillips said. "Florida is our biggest imprint."

As the Nov. 4 vote nears, it's all about voter-to-voter contacts, relationships that could pay dividends in 2016 and beyond.

That means sending hundreds of staff and volunteers into neighborhoods, like the one in Miami packed with pastel homes with Spanish-tile roofs.

Malave, the group's Hispanic outreach chief in Florida, spent more than three hours knocking on doors in the scorching sun on a recent Tuesday. He kept asking the questions and punching in the answers on his iPad so leaders at headquarters could figure out which messages were working.

Reaction from voters was mixed and answers came in a blend of English and Spanish. But, as Malave asked about the health law and government spending, he found a few potential recruits.

"I'm a registered Democrat," one woman told Malave, "but with the situation going on, I'm in the middle."

Malave recorded the answers and moved to the next house.

"This isn't glamorous work," Malave said, sweating through a polo shirt. "But you've got to go where the folks are. People aren't going to come to you."