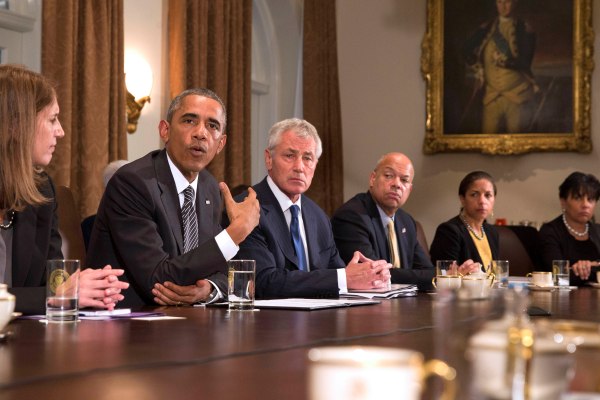 PHOTO: President Barack Obama, third from left, speaks to the media about Ebola during a meeting in the Cabinet Room of the White House in Washington, Wednesday, Oct. 15, 2014, with members of his team coordinating the government’s response to the Ebola outbreak. From left are Assistant to the President for Homeland Security and Counterterrorism Lisa Monaco, Health and Human Services Secretary Sylvia Burwell, the President, Secretary of Defense Chuck Hagel, Secretary of Homeland Security Jeh Johnson, National Security Adviser Susan Rice, Penny Pritzker, Secretary of Commerce, and White House chief of staff Denis McDonough. (AP Photo/Jacquelyn Martin)

WASHINGTON (AP) — President Barack Obama on Friday turned to a trusted adviser to lead the nation's Ebola response as efforts to clamp down on any possible route of infection from three Texas cases expanded, reaching a cruise ship at sea and multiple airline flights.

Facing renewed criticism of his handling of the Ebola risk, Obama will make Ron Klain, a former chief of staff to Vice President Joe Biden, his point man on fighting Ebola at home and in West Africa. Klain will report to national security adviser Susan Rice and to homeland security adviser Lisa Monaco, the White House said.

The World Health Organization admitted to mistakes of its own in failing to contain the outbreak still spreading out of control in Liberia, Sierra Leone and Guinea.

"Nearly everyone involved in the outbreak response failed to see some fairly plain writing on the wall," the U.N. health agency said in a draft internal document obtained by The Associated Press. The response was marred by incompetency and ineffective bureaucracy, the document says, and experts should have realized that traditional containment methods wouldn't work in an African region with porous borders and broken health systems.

Under pressure from Republican lawmakers, Obama on Thursday expressed some openness to considering restricting travel from the three Ebola-stricken West African nations. But he said health and security experts continue to tell him that the screening measures already in place for travelers are more effective.

Government officials said early Friday that they were seeking to remove a Dallas health care worker who handled an Ebola lab specimen from a Caribbean cruise, although she has shown no signs of infection. Officials in Belize would not allow the woman or her spouse do disembark there, a Carnival Cruise Lines spokeswoman said.

The cruise company said in a statement that the woman, a lab supervisor traveling with her spouse, remained in isolation "and is not deemed to be a risk to any guests or crew."

Still, under tighter travel rules placed on the staff of a Dallas hospital where two nurses caught Ebola from a Liberian patient, the woman shouldn't be on the ship.

The Centers for Disease Control and Prevention says Ebola isn't contagious until symptoms appear. Ebola isn't spread through the air like the flu; people catch it by direct contact with a sick person's bodily fluids, such as blood or vomit.

Doctors at the National Institutes of Health in Maryland said that a Dallas nurse, Nina Pham, brought there for Ebola treatment was very tired but resting comfortably Friday in "fair" condition.

The second nurse to contract Ebola, Amber Vinson, was being treated at Emory University Hospital in Atlanta, as precautions related to her personal travel spiraled wider.

Passengers and crew aboard seven Frontier Airlines flights were affected, as well as a handful of people in the Akron, Ohio, area. An Akron bridal shop that Vinson visited was closed Thursday and shoppers were being contacted.

A CDC official said Vinson may already have had Ebola when she flew from Dallas to Ohio to visit relatives. The agency had earlier said Vinson didn't become sick until the morning after she returned to Dallas.

Officials are investigating whether she had symptoms as far back as Saturday, Oct. 11, or possibly earlier, said Dr. Chris Braden of the CDC.

"Some more information that's come through just recently would say that we can't rule out the fact that she might have had the start of her illness on Friday," Braden said.

Police said Vinson stayed at the home of her mother and stepfather in Tallmadge, northeast of Akron, and the home has been cordoned off with yellow tape. Eight individuals in northeast Ohio were under quarantine, health officials said.

Frontier Airlines said it would contact passengers on seven flights, including two that carried Vinson and others afterward that used the same plane.

Airline officials put two pilots and four flight attendants on paid leave for 21 days and said they did not know when the aircraft, which has been cleaned several times, would return to service.

In Dallas, the epicenter of Ebola in the U.S., officials took a tougher approach toward monitoring dozens of health care workers who were exposed to the virus while treating Liberian traveler Thomas Eric Duncan, who died at Texas Health Presbyterian Hospital.

The health care workers were asked to sign legally binding documents agreeing not to go to public places or use public transportation. The sanctions for anyone who breaks the agreement weren't disclosed.

The chief clinical officer at the hospital, Dr. Daniel Varga, said the hospital was caught short when Duncan came to the institution "with non-specific symptoms."

"I think we all in the health care community underestimated the challenge of diagnosis," he said on ABC's "Good Morning America" Friday.

He also said the two nurses who contracted the disease had followed standard hospital procedure. "We have no indication that Nina or Amber had any break in protocol. We were working with the best information we had," Varga said.

Canceling a campaign fundraising trip for the second straight day Thursday, Obama met into the evening with top aides and health officials. The White House said Obama also placed calls to Canadian Prime Minister Stephen Harper and Swedish Prime Minister Stefan Lofven to discuss the need for an international response to the outbreak in West Africa.