Golfers Gripped by Desire to 'Dufner' 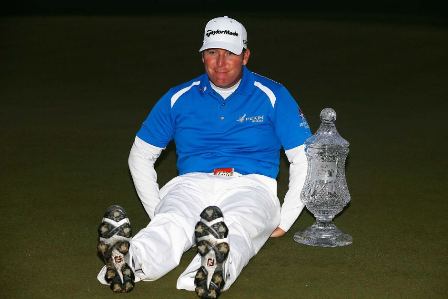 So it was entirely appropriate that D.A. Points celebrated his win at the Houston Open by posing for the cameras with his best impression of the trend that has gone viral on the internet -- the American golfer slouched on the green with a slightly vacant expression on his face with the tournament trophy by his side.

Before Points' win, which earned him a place at the Masters and a winner's check of $1.16 million, the U.S. PGA Tour event had been buzzing with laughter after the likes of McIlroy et al posted pictures of themselves on Twitter mimicking Jason Dufner's unfortunate photograph of himself looking rather disinterested in a Texas classroom surrounded by children, while performing a charity visit last week.

"What can I say, I was tired, my back hurt from sitting on the floor, and we were talking about relaxation and focusing," tweeted Dufner, explaining his lackadaisical posture and the less than animated expression on his face.

Too late -- #Dufnering was quickly trending after a succession of leading golfers gently poked fun at their sporting colleague on Twitter.

Sitting in front of the General Lee car from the Dukes of Hazard television series that he owns, Watson tweeted: "Just #Dufnering in the garage!!"

Other sports starts quickly got in on the act, peppering Dufner's Twitter timeline with their own version of the online phenomenon -- former tennis player Andy Roddick even tweeted a picture of his dog "Dufnering".

Given Points had made just two cuts in nine starts this year, the 36-year-old was not surprisingly only too happy to oblige the photographers with his own take on golf's new craze after his win on Sunday at the Redstone Club.

"You know, again, I want to win," Points told the PGA Tour website as he more seriously outlined his future ambitions.

"I want to win more than once. I want to have the opportunity to win majors, I want to play in Ryder Cups and Presidents Cups. These are things I want to do and I know I'm capable of doing.

"So I never doubt that I can do it. I certainly get down and frustrated when I make two of nine cuts. That's not making you feel real great about yourself.''

Remarkably Points earned his place at the Masters thanks to some help from his mother's putter as he finished one shot ahead of compatriot Billy Horschel and Sweden's Henrik Stenson.

"I've been hitting it better and better, and I saw Brian White for a putting lesson,'' added Points, who holed a 13-foot par putt at the 72nd hole to to clinch victory after thunderstorms had halted play in the closing stretch.

"Gave me a couple things, changed the putter, boom, felt great, and here I am.

"So, the thing about it, is I never count myself out. I never just chalk it up, like, 'Oh, this year is over with.' I've never ever felt like that. I was just grinding, just trying to wait and try to find that one thing that was like, boom, there it is and there I go.

"Fortunately, it was this week and I capitalized on it."

McIlroy, who announced during the tournament that he would postpone a UNICEF charity trip to Haiti in order to add this week's Texas Open to his schedule, finished tied for 45th -- 12 shots behind Points.

He is still seeking his first victory this season, having fallen to No. 2 in the world rankings behind Tiger Woods.