Fight Against Militants in Iraq and Syria Named “Inherent Resolve” 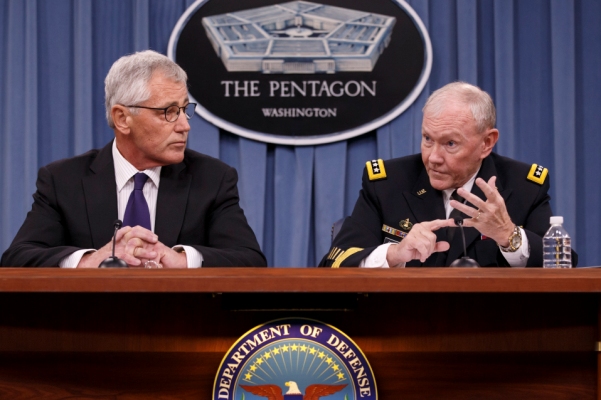 Defense Secretary Chuck Hagel and Army Gen. Martin Dempsey, right, chairman of the Joint Chiefs of Staff, brief reporters about ongoing operations against Islamic extremists in Syria and Iraq, at the Pentagon, Friday, Sept. 26, 2014. Dempsey testified to Congress earlier this month he may at some point recommend that ground troops be used to destroy the Islamic State militant operation. He told reporters today that the only force that can fight the Islamic State "would be comprised of Iraqis, Kurds and moderate Syrian opposition." (AP Photo/J. Scott Applewhite)

WASHINGTON (AP) — It may be less punchy than previous nicknames for U.S. conflicts in the Middle East -- remember Operation Desert Storm and its thunderous attacks on Saddam Hussein's occupation army -- but the Pentagon has finally named its fight against Islamic State militants in Iraq and Syria: Operation Inherent Resolve.

The naming process, which took weeks of quiet deliberation behind closed doors at U.S. Central Command and at the Pentagon, is part of a package of administrative moves under way to organize a long-term military campaign.

But that name, Inherent Resolve.

It's less awe-inspiring than any of the names chosen for U.S. military operations in Iraq over the past two decades — Desert Shield, Desert Storm or Desert Fox, for example. It appears to convey the no-drama approach that marks President Barack Obama's style.

The staff of Army Gen. Martin Dempsey, chairman of the Joint Chiefs of Staff, made the final decision on the name, said Dempsey spokesman, Col. Ed Thomas. Thomas offered no details about the process.

Central Command, which is executing the campaign, took a stab at explaining the choice.

"Inherent Resolve is intended to reflect the unwavering resolve and deep commitment of the U.S. and partner nations in the region and around the globe to eliminate the terrorist group ISIL and the threat they pose to Iraq, the region and the wider international community," it said, using a common acronym for the Islamic State group.

A barrage of U.S.-led airstrikes in and around the Syrian city of Kobani, including 39 over the past two days, has killed hundreds of Islamic State fighters and has stiffened the city's Kurdish defenders, the Pentagon's spokesman said Wednesday.

Offering an unusually detailed description of the fighting, Rear Adm. John Kirby told reporters that all but "hundreds" of civilians have evacuated the city and that increasing numbers of Islamic State group fighters are flowing in.

"One of the reasons why you're seeing more strikes there is because there is more ISIL there," Kirby said, using a common acronym for the extremist group. Their greater numbers are providing more targets for U.S. bombs, he said.

"It's hard to give an exact number, but we believe that we have killed several hundred ISIL fighters," he added. He did not specify a time period; airstrikes there began Oct. 1, according to U.S. Central Command, which announced Wednesday that it had launched 18 airstrikes near Kobani over the previous 24 hours, following a barrage of 21 strikes there the previous 24 hours.

Kirby said Kobani remains in danger of falling to the Islamic State fighters, who are intently focused on the city.

"These guys want to grab ground. They want territory," he said. "Kobani is a territory they want."

Military operations are routinely given official names, in part for administrative reasons.

But they are meant also to bolster public support and international credibility. The U.S.-led effort to protect Kurds who fled their homes in northern Iraq in the aftermath of the 1991 Gulf War, for example, was called Operation Provide Comfort. A U.S. military disaster relief mission in Bangladesh that same year was Operation Sea Angel.

The U.S. military's effort against Ebola in West Africa is called Operation United Assistance. The name for the U.S. role in an international air campaign in Libya in 2011 was Odyssey Dawn.

The naming of the current air campaign in Iraq and Syria comes as Obama and his military advisers wrestle with directing a coalition of partner nations toward a common goal: destroying the Islamic State group. It has been slow going thus far, with officials cautioning that it could drag on for months or years.

The U.S. has more than 1,400 military personnel in Iraq, mostly in Baghdad, but Obama has ruled out sending combat troops. The U.S. says it has no troops in Syria.

The U.S. has a long and difficult history of military involvement in Iraq, beginning with the George H.W. Bush administration's initial response to Iraqi President Saddam Hussein's invasion of Kuwait in August 1990.

That effort was dubbed Operation Desert Shield to deter Saddam from invading Saudi Arabia; in early 1991 that transitioned to a U.S.-led air and ground campaign, Operation Desert Storm, which successfully expelled Iraqi troops from Kuwait but left Saddam in power in Baghdad.

Promising to "shock and awe" Saddam's forces, President George W. Bush launched Operation Iraqi Freedom in March 2003, an air-and-ground campaign that quickly toppled Saddam's regime but opened the door to a homegrown Sunni insurgency that turned the war into an eight-year struggle.

The practice of naming military operations goes back at least to World War II, when code names were assigned mainly to preserve security. The code names were classified, unlike the nicknames of modern operations.

In a 1995 article in Parameters, a U.S. Army War College academic journal, Gregory C. Sieminski wrote that the Pentagon's Vietnam-era guidelines for naming military operations cautioned against counterproductive name choices, specifying that they must not express "a degree of bellicosity inconsistent with traditional American ideals or current foreign policy" or convey "connotations offensive to good taste or derogatory to a particular group, sect or creed."

There should be no fear that Operation Inherent Resolve is too bellicose.

Sieminski argued that careful naming of military operations can provide a public relations boost and help shape what he called a war of images. "In that war, the operation name is the first — and quite possibly the decisive — bullet to be fired," he wrote.