Does Joe Biden Have the Discipline to Be President after Obama? 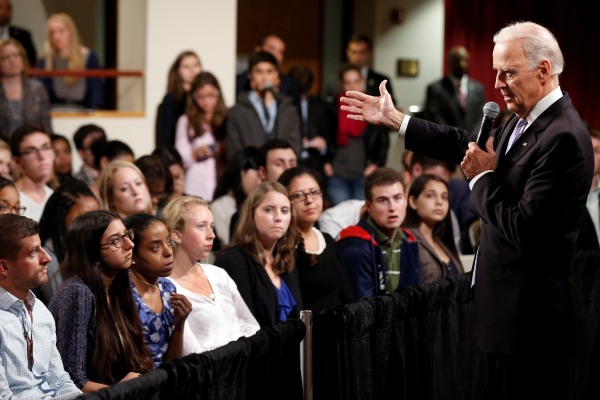 In this Oct. 2, 2014, file photo, Vice President Joe Biden answers questions from students at Harvard University's Kennedy School of Government in Cambridge, Mass. Biden’s biggest mistake in accusing U.S. allies of supporting extremists in Syria may be that he said publicly what Obama administration officials have long preferred to say only privately. Biden apologized over the weekend to Turkey and the United Arab Emirates after saying they had a role in allowing foreign fighters, weapons and money into Syria to bolster groups fighting Syrian President Bashar Assad. He also made similar statements about Saudi Arabia’s role in aiding extremists. (AP Photo/Winslow Townson, File)

WASHINGTON (AP) — Vice President Joe Biden's supporters often brush off his slips of the tongue as byproducts of the speak-your-mind politics many Americans crave. But this time, Biden's verbal blunders are causing more than just a few rough headlines and a momentary nuisance for the White House.

Twice in two days, Biden had to apologize to key U.S. allies in the fight against Islamic State militants after accusing the allies of arming and funding al-Qaida-linked groups in Syria. Not only did his comments threaten to jeopardize President Barack Obama's fragile coalition, they also put the White House on the defensive, forced to clean up for Biden without specifically rebutting what he said.

As Biden seeks to fashion himself as a credible alternative to Hillary Rodham Clinton in the 2016 presidential race, his latest missteps have rekindled lingering questions about his ability to serve as commander in chief. After all, voters who affectionately overlook a bit of misplaced candor may be less thrilled by the prospect of a president who has trouble differentiating between what he says in public and in private.

"When he makes missteps, he becomes a character," Democratic strategist Hank Sheinkopf said. "Although he may be successful in lining up some of the Democratic leadership, he will be less likely to get the Democratic nomination if he looks foolish."

In this case, Biden's mistake wasn't in saying something that wasn't true. In fact, what Biden said at Harvard University largely conformed to what Obama administration officials long have said privately. His mistake was in saying it in front of television cameras that carried his remarks to far-away capitals like Istanbul and Abu Dhabi, where exasperated leaders demanded — and received — a mea culpa.

"The vice president is somebody who has enough character to admit when he's made a mistake," White House spokesman Josh Earnest said.

Making matter worse: Biden's blunt talk about the situation in Syria came during a two-week period in which the vice president's loose tongue had already gotten him in trouble with groups ranging from the Anti-Defamation League to Asian-Americans.

After a quick visit to Iowa last month, Biden had to apologize to the head of the ADL, a Jewish group that fights anti-Semitism, after using the word "shylocks" to describe unscrupulous moneylenders who had taken advantage of U.S. troops. On the same trip, he raised eyebrows by referring to Asia as "the Orient," and the White House had to clarify comments he made that seemed to suggest the U.S. would consider deploying ground troops to fight the Islamic State group.

Former aides who have prepped Biden say they repeated predetermined talking points to him over and over before sensitive meetings and high-profile speeches. The vast majority of the time he hits the script perfectly, the aides said.

But sometimes their pleas not to freelance were met with a roll of the eyes by Biden, who served for decades on the Senate Foreign Relations Committee and has strong views of his own.

Biden's supporters say his candor amid an overly sanitized political environment is part and parcel of his appeal.

"The more people know about him, the more they value that he says what he thinks," said former Sen. Ted Kaufman, D-Del., Biden's longtime confidante and political adviser. "I think that's really put him in a good stead with foreign leaders around the world."

But Biden's detractors say the short-term headaches that emerge when he goes off-script pale in comparison to the damage that could be done with Biden in the Oval Office. As Biden ponders a third presidential bid in 2016, they say, voters will have to make a call about whether they want a loose cannon in charge when, for instance, the U.S. is confronting the threat from the Islamic State group.

"As head of state there are times when you have to have a moment where you are trying to achieve larger national ends that aren't always served by having a case of no internal monologue that tells you to shut the heck up," said Rick Wilson, a Republican strategist.

Such caricatures of the second highest-ranking U.S. leader paint a particularly stark contrast to Clinton, who gained a reputation as a hawkish, intensely disciplined diplomat during her tenure as Obama's secretary of state. Most Democrats doubt that Biden will challenge Clinton if she decides to run.

But even with Clinton emerging as the overwhelming favorite to win the Democratic nomination, Biden has offered frequent reminders that he still covets the top job. As he told a student council vice president last week about holding the No. 2 job, "Isn't that a bitch?"