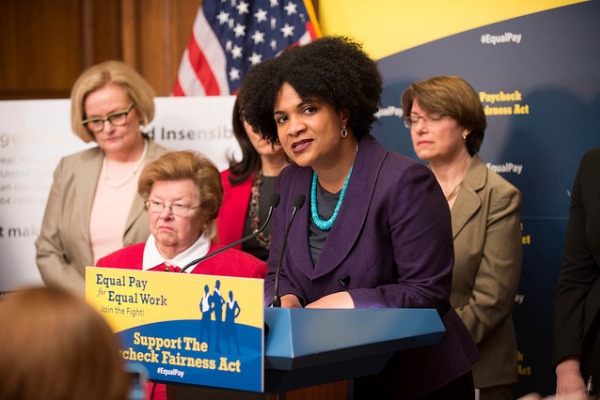 WASHINGTON (NNPA) – While Black girls posses high levels of leadership qualities, they receive the least opportunity to fill these roles throughout their lives, a new report finds.

The study, titled, “Unlocking Opportunity for African American Girls: A Call to Educational Equity,” was co-authored by the NAACP Legal Defense and Educational Fund, and the National Women’s Law Center (NWLC). It examines barriers to educational success for Black girls, and also takes a brief look at leadership access

This dearth of girls and women in charge is known as the leadership gap – and for women of color, the gap is a chasm.

Despite having the highest workforce participation rates of all women, Black women hold just 5.3 percent of all managerial and professional positions. In business, Black women occupy only 2 percent of board seats among Fortune 500 companies. In government, there is only one Black woman mayor among the nation’s 100 largest cities, no Black women serving as governor, and only 14 Black women in the House of Representatives. In U.S. history, there has only been one Black woman senator: Carol Moseley Braun (D-Il.), who served from 1993 to 1999.

Pointing to a 2013 Girl Scout survey, the report interestingly finds that Black girls are more likely than Latina and White girls to want to lead; to already consider themselves leaders; to already have had leadership experiences; and to rate themselves highly on “leadership skills.”

“African American girls have higher rates of positive self-esteem, even when confronted with harmful stereotypes,” says Fatima Goss Graves, NWLC vice president for Education and Employment, and co-author of the report. “You have this desire to be a leader and this sense that you are a leader, but when we compare that to reports that show only 12 percent of girls overall participate in student council or student government…there’s a bit of a disconnect there.”

For Black girls, all that leadership potential is threatened as racial and gender stereotypes, discipline practices, and poorly resourced schools collide. According to the report, the assertive qualities many Black girls possess – which make for good leaders – are often perceived as defiance and disruption coming from them; this brings harsher discipline and negative school experiences.

The report also points out that Black girls are rarely steered toward activities and opportunities to be leaders. With sports, for example, Black girls at well-funded schools have similar rates of athletic participation as other girls; but at poorer schools, where Black girls are more likely to be enrolled, their participation rates are lower.

“When differences in schools attended were taken into account, Black and Hispanic adolescent males had higher levels of physical activity than their White peers at the same schools, making it ‘clear that the influence of schools (particularly in prioritizing which sports and activities to fund) affects the genders differentially,’” according to the report.

Black girls who play sports are 27 percent more likely to graduate from college than their peers. One piece of research cited found that more than 80 percent of executive businesswomen were athletes in their youth.

“When I saw the data I said, okay, the internal tools are there,” Graves says. “So if [Black girls] have support – from educators, from community members, from family – to show leadership, to be engaged in the sorts of activities that foster leadership, then you’ll have everything connected up.”

Teacher attitudes are a large factor in the gap between Black girls’ potential and Black women’s realities.

“The intersection of racial and gender stereotypes has a significant impact on discipline rates for African American girls, likely due in part to bias in the exercise of discretion by teachers and administrators,” the report reads. “Ultimately, educators’ perceptions of African American young women…undermine[s] their potential for success.”

The National Education Association, the nation’s largest union representing public school education professionals, has set out to close the leadership gap for all girls.

Last week they released a report based on a survey of nearly 1,000 NEA members. Researchers found that teachers generally hold an “egalitarian” view of leadership and the skills and character it requires. They also see that gender affects their students’ pursuit of leadership roles, with girls tending to seek leadership in English and language spheres (if at all), and boys tending to seek opportunities in sports, STEM, and student government.

The report also uncovered subtle gender bias among these same educators, who were unaware the survey was about gender until the end of it.

“[The finding] suggests that even well-meaning, highly skilled, and deeply committed educators may hold and act on gender stereotypes,” the NEA findings read. “Research shows that even individuals who may express gender-egalitarian beliefs can still hold stereotypical beliefs at an unconscious level, and those unconscious beliefs may influence our behavior more than our explicitly held beliefs simply because we are unaware of them.”

Both reports cite similar recommendations to educators for closing the leadership gap, namely: professional development and training to address teacher bias and attitudes against bias; and increasing girls’ access to extracurricular and opportunities to lead. The NEA’s report also recommends highlighting the achievements and contributions of women throughout the curriculum.

Graves adds that schools will also need to address underlying inequities before the gap can be closed.

“A lot of our research revealed troubling things that are happening in schools, things like excessive discipline, inappropriate responses that were affecting student learning time, things like unaddressed harassment and treatment of young moms,” she says. “At the same time as schools are thinking and focusing on fostering opportunity and fostering leadership with an eye toward girls of color – which I think is fantastic – they have to be looking at ensuring that they’re addressing some of the negative factors going on as well.”