Michelle Obama Back on Campaign Trail to Help Democrats this November 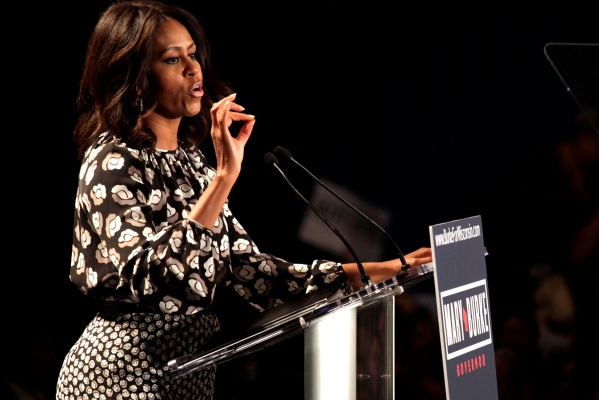 PHOTO: In this Monday, Sept. 29, 2014 file photo, first lady Michelle Obama speaks on behalf of Wisconsin Democratic gubernatorial candidate Mary Burke at a campaign rally in Milwaukee. Maine gubernatorial candidate Mike Michaud’s campaign is getting some help from Michelle Obama. The first lady will be in Maine on Friday, Oct. 3, 2014, at a rally for the Democratic congressman who’s seeking to unseat Republican Gov. Paul LePage. (AP Photo/Darren Hauck, file)

WASHINGTON (AP) — A month before critical midterm elections, Michelle Obama is putting her popularity and influence to the test, trying to help elect Democratic candidates and give her husband a fighting chance to complete his agenda.

Starting Friday, Mrs. Obama will ramp up her campaigning by heading to New England to support gubernatorial candidates Martha Coakley in Massachusetts and Rep. Mike Michaud in Maine.

She follows up with a pair of Midwest stops on Tuesday: an appearance with Mary Burke, the Democratic candidate for governor in Wisconsin, and a plug in Chicago for Illinois Gov. Pat Quinn. President Barack Obama helped raise money for Quinn this week at a Chicago fundraiser.

The first lady also plans appearances this month in Iowa, where Democratic Rep. Bruce Braley and Republican Joni Ernst are locked in one of the year's most competitive Senate races, as well as in Michigan for Senate candidate Gary Peters and gubernatorial candidate Mark Schauer.

"She knows the stakes are high and that's why she is dedicating a good part of her schedule to making sure Democrats are out there voting in the midterms," said Tina Tchen, the first lady's top aide.

The first lady made her 2014 campaign trail debut last month with stops in Georgia with Michelle Nunn, who hopes to pick up a key Senate seat for Democrats on Nov. 4, and in Wisconsin with Burke, who is trying to unseat Republican Gov. Scott Walker, a potential presidential candidate.

Mrs. Obama's office declined to release her complete campaign schedule, but she is again setting aside her well-known dislike of politics and juggling her multiple roles as wife, mother of two teenage daughters and first lady to spend at least two days a week on the road boosting Democratic candidates and urging supporters to vote.

Voters will decide on Nov. 4 which party controls the House and Senate during Obama's remaining two years in office, along with determining control of more than 30 governor's offices.

Republicans are expected to keep control of the House and hope to pick up the six seats the party needs to claim the Senate majority and, with it, control of both houses of Congress. Such an outcome would leave the president with scant hope of enacting any major legislation before leaving office.

Enter the first lady, who thought her husband's re-election effort two years ago, when she barnstormed key states on his behalf, was the end of their years-long involvement in political campaigns.

That was until Obama broke the news that he needed her help once again.

"I told Michelle in 2012 this was my last campaign. She said, 'Hallelujah!'" the president said earlier this year. "And then I had to go back to her about six months ago and say, 'Actually, honey, let me amend that. We've got one more campaign.'"

Democrats are clamoring for her to campaign with them even as they avoid appearing with the president, whose job approval rating has sunk to the low 40s.

Obama, for example, has not campaigned for Nunn in Georgia, where he lost in 2008 and 2012. So far this election season, he has campaigned only with Democratic candidates from his home state of Illinois. A planned joint appearance in Denver in July with Sen. Mark Udall quickly became a solo Obama stop when Udall decided at the last minute to stay behind in Washington.

Mrs. Obama also is viewed more positively than Obama by the public, 62 percent to 50 percent, according to the most recent Pew Research Center survey.

Republican Party spokeswoman Kirsten Kukowski said it wasn't surprising that Democratic candidates prefer campaigning with Mrs. Obama over a president who is sagging in the polls. "But she still represents the same failed Obama policies that are wildly unpopular and dragging Democrats down across the board," Kukowski said.

Mrs. Obama's appearance in Wisconsin earlier this week drew a crowd of 2,500, the biggest turnout yet for a Burke event, said communications director Joe Zepecki.

"That speaks to sort of the enthusiasm that she brings and the opportunity that she helps us get to reach people and get them engaged for the final weeks of this race," he said.

At her campaign stops, Mrs. Obama encourages turnout among base voters whom both she and the president have chided for tuning out politics in election years when there is no presidential race. She tells them that staying home would be a disservice to the work the president they voted into office is trying to complete.

"If we want to keep making that change that we all believe in, then we need a president who will fight for that change but we also need a Congress who will pass it, and leaders at our state level who support it," Mrs. Obama said at a Democratic Party event last month. "And frankly, if we lose these midterm elections, it's going to be a whole lot harder to finish what we've started."