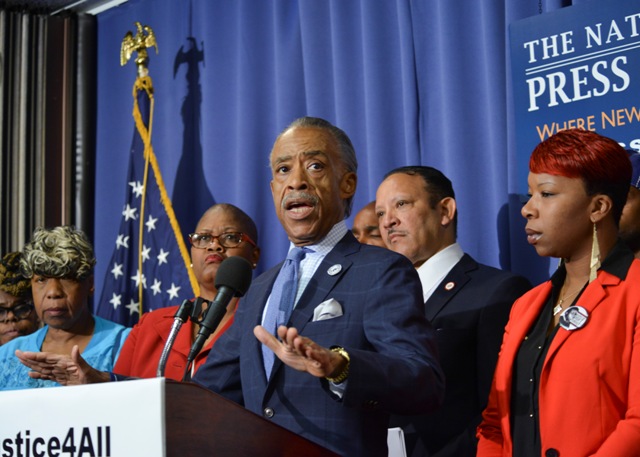 WASHINGTON (NNPA) – Officials from the National Action Network, the National Urban League the National Bar Association, the National Coalition on Black Civic Participation, the NAACP, the American Civil Liberties Union (ACLU) and other civil rights groups have urged the Justice Department to remain focused on the deaths of Michael Brown and Eric Garner cases and to make sure that the police officers involved are held responsible for their deaths.

During a press conference attended by the parents of Brown and Garner, Marc Morial, president and CEO of the National Urban League said, “In recent weeks and months confidence around the concept of justice for all in our nation has plunged to the lowest levels that we have seen in a generation.”

On July 17, Eric Garner, 43, was choked to death by Officer Daniel Pantaleo in Staten Island, N.Y. Moments before his death, officers had attempted to arrest Garner, who was unarmed, for allegedly selling untaxed cigarettes. Although Garner’s death has been ruled a homicide, no charges have been filed against the officer involved.

On Aug. 9, Michael Brown, 18, was shot to death by Darren Wilson, a White police officer in Ferguson, Mo., following a brief confrontation. Moments before Wilson fatally shot Brown, the officer had asked the teenager, who was also unarmed, and another young man to stop walking in the street.

Gwen Carr, Garner’s mother, said that although her son wasn’t perfect, he didn’t deserve to die.

Morial said that the group demands justice, fairness and a full and complete investigation by the United States Department of Justice into Michael Brown’s death and Eric Garner’s murder.

In recent weeks the Justice Department has announced plans to investigate the Ferguson police department to determine if they violated the rights of Black residents in the past.

On September 18, Attorney General Eric Holder launched the National Initiative for Building Community Trust, a program that “will create a substantial investment in training, evidence-based strategies, policy development and research to combat distrust and hostility between law enforcement and the communities they serve,” according to a press release issued by the Justice Department.

Holder said that the events in Ferguson reminds us that we can’t allow tensions, which are present in so many neighborhoods across America, to go unresolved.

“As law enforcement leaders, each of us has an essential obligation – and a unique opportunity – to ensure fairness, eliminate bias, and build community engagement,” said Holder. “The National Initiative for Building Community Trust and Justice represents a major step forward in resolving long standing tensions in many of America’s communities and it will allow us to build on the pioneering work that the Justice Department and our law enforcement partners across the country are already doing to strengthen some of our nation’s most challenged areas.”

The project, funded with $4.75 million grant, will also provide research and technical support to law enforcement officials and others who work in the criminal justice system.

Al Sharpton, civil rights activist and founder of the National Action Network, said that talking about sensitivity and training is good, before adding that you don’t need people who would choke a man when he says 11 times on tape, ‘I can’t breathe.’

He does not need training, Sharpton said. He needs to be held accountable.

Sharpton said that the coalition of civil rights groups and community stakeholders is not anti-police, and the group doesn’t believe that all police are bad.

“But acting as though that no police is wrong none of the time is moving this country towards a police state where we don’t have the right to question police under any circumstances,” said Sharpton.

Sharpton described a recent case in South Carolina where a state trooper shot an unarmed man.

On, September 4, just outside of Columbia, S.C. Sean Groubert, South Carolina Highway Patrol trooper pulled Levar Jones over allegedly for not wearing his seat belt. Groubert asked Jones to exit his vehicle then asked him for his driver’s license. As Jones reached back into his vehicle to retrieve his license, Groubert opened fired, striking Jones at least once. The incident was captured on Groubert’s dash-camera.

Groubert was subsequently fired and arrested on charges of assault and battery of a high and aggravated nature, which could lead to his serving up to 20 years in prison.

Most law enforcement agencies have not been as decisive in South Carolina in handling wayward officers. Instead, there is an “intrinsic relationship” between local prosecutors and the local police that makes less likely that police officer will be prosecuted, Sharpton state.

He said the federal government can place a key role in making sure justice is served.

“If you have the federal government, that does not depend on local police, you have a more objective and fair investigation,” said Sharpton. “It protects everyone.”

During the press conference, Michael Brown’s parents, spoke briefly about the frustration they have felt in dealing with law enforcement officials in Missouri.

An emotional Leslie McSpadden, Michael’s mother said, “Missouri has not shown us anything that we are looking for.”

The father, Michael Brown, Sr., said, “This is very terrible for us and for everyone else that has lost. e’re here to get justice. We need your help.”

Cornell William Brooks, president and CEO of the National Association for the Advancement of Colored People, said that within 12 hours of Michael Brown’s death, civil rights group were on the ground in Ferguson, Mo., trying to keep peace while seeking justice in the community. Brooks said that the NAACP has worked with the Justice Department to locate witnesses.

Brooks continued: “We want to honor these families with our service and commitment. [We will] see it to the very end.”