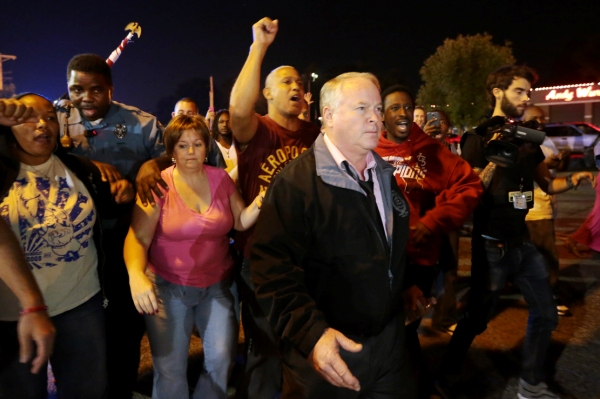 FERGUSON, Mo. (AP) — Cast as an olive branch by some, the Ferguson police chief's attempt to march with protesters demanding charges in the killing of an unarmed, black 18-year-old by a white officer still erupted into a clash that activists Friday blamed on police missteps.

The trouble Thursday night came hours after Police Chief Tom Jackson released a videotaped apology to Michael Brown's family that drew skepticism from residents and protesters who still crave answers about Brown's death. A county grand jury is weighing whether to indict Ferguson officer Darren Wilson in the Aug. 9 shooting, and the Justice Department is investigating whether Brown's civil rights were violated.

The latest unrest occurred two days after many in the St. Louis suburb complained Ferguson police did little to douse a fire that destroyed a makeshift memorial for Brown.

"You have people grasping for a crumb of justice," protester Charles Wade, 31, of Austin, Texas, said Friday near a canopy across the street from the police station where protesters have regularly gathered since shortly after Brown's death. "There's a circle of trauma that keeps happening."

He said Thursday night's protesters appeared largely unmoved by Jackson's apology, saying they "felt it was more of a PR move than sincere." In it, Jackson acknowledged Brown's body should have been removed from the street much sooner than the four hours it remained there as police collected evidence. 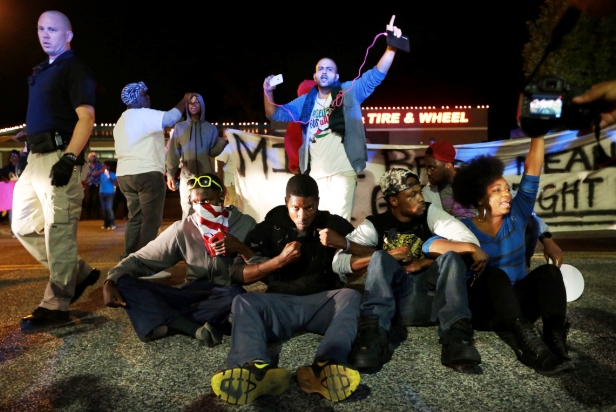 Also Thursday, news surfaced that the man hired to handle public relations for Ferguson, including the chief's apology, was fired after officials learned he had been convicted of reckless homicide in 2006 in connection with a shooting in Shelby County, Tennessee. Devin James told the St. Louis Post-Dispatch the shooting was self-defense and he served 90 days in prison and five years of probation.

James and Jackson did not return messages to The Associated Press seeking comment Friday.

Col. Ron Replogle of the Missouri State Highway Patrol said Friday that Missouri police have been undergoing training on responding to civil unrest, buying more equipment and "planning for the worst" throughout the St. Louis region if a grand jury opts not to indict Wilson.

Thursday's flare-up came after Jackson agreed to join marchers but failed to tell officers monitoring his safety to stand down, witnesses said Friday. That led to some officers forcing their way into the gathering, then pushing and shoving marchers, the witnesses said. Several protesters were arrested.

"If (the officers) had just not come in, everything would be all right," protester Steven Wash, 26, of Ferguson, said Friday.

"It was absolute mayhem," Wade added. "Jackson decided to come out and broker some peace and pretty much asked what he could do to build a new level of trust, and police continued to come, come, come. The olive branch he tried to extend was great, and it showed he wasn't a robot. But police forced him out like he was a diplomat in a war zone."

Activist groups continued pressing for Jackson to resign Friday. Montague Simmons, leader of the Organization for Black Struggle, accused the chief of pandering to cameras and "throwing out empty promises of accountability" as "a charlatan in uniform."

In a letter released Friday, Justice Department civil rights investigators reminded Jackson that he is to ban his officers from wearing bracelets supporting Wilson while on duty. Ferguson residents complained about the bracelets, which are black with "I am Darren Wilson" in white lettering, at a meeting with federal officials this week.

Associated Press writers David A. Lieb in Columbia and Alan Scher Zagier in St. Louis contributed to this report.