After AG Eric Holder What’s Next for Civil Rights? 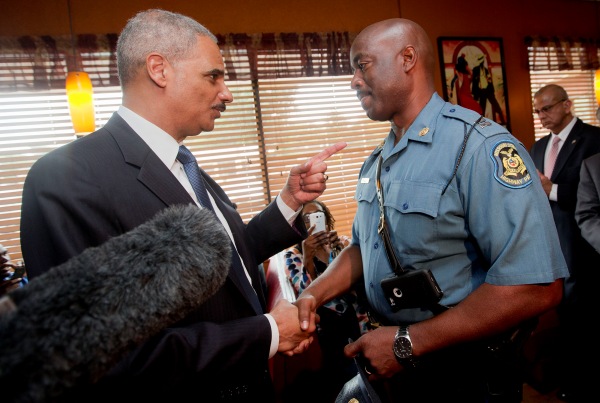 PHOTO: In this Aug. 20, 2014 file photo, Attorney General Eric Holder talks with Capt. Ron Johnson of the Missouri State Highway Patrol at Drake's Place Restaurant in Florrissant, Mo. The Justice Department plans to open a wide-ranging investigation into the practices of the Ferguson, Missouri, Police Department following the shooting last month of an unarmed black 18-year-old by a white police officer in the St. Louis suburb, a person briefed on the matter said Wednesday, Sept. 3, 2014. (AP Photo/Pablo Martinez Monsivais, File-Pool)

Civil rights leaders, liberal activists and black lawmakers are now left wondering what effect Holder's impending departure will have on the high-profile efforts begun on his watch. "There's a lot for us to calculate," said the Rev. Al Sharpton, who was meeting with black leaders in Washington.

Holder has been applauded by civil rights and equal rights activists as the most effective attorney general ever for their causes.

"There has been no greater ally in the fight for justice, civil rights, equal rights, and voting rights than Attorney General Holder," declared Myrlie Evers-Williams, widow of slain civil rights leader Medgar Evers and a former NAACP national chairwoman.

But the first black attorney general could be leaving several things undone as he transitions out:

— Possible federal charges in the deaths of black men including Michael Brown in Ferguson, Missouri, and Trayvon Martin in Sanford, Florida.

— The November monitoring of congressional and statewide elections that will take place after the Supreme Court threw out a major protection in the Voting Rights Act.

— And projects he personally promoted such as the reduction of racial profiling in federal investigations, changes in how federal prosecutors negotiate sentencing, changes in the death penalty system and efforts to reduce tensions between local police departments and minority communities.

For his part, Holder told the Congressional Black Caucus during its legislative conference on Friday that he plans to keep on pushing voting rights and civil rights protections while still in office. He has agreed to stay on until the Senate confirms his replacement, and President Barack Obama has yet to name that person.

"In the meantime, there remains a great deal to be done," said Holder, who got a standing ovation from the crowd as he entered the room. "I have no intention of letting up or slowing down."

Despite Holder having informed the White House around Labor Day of his impending departure, black lawmakers and civil rights activists in Washington were shocked to find out about his resignation Thursday.

At the National Press Club — only a few blocks from the Justice Department — Sharpton, National Urban League president Marc Morial and representatives of other groups had joined with Brown's parents to call for federal charges to brought against the white police officer that fatally shot him. Morial, Sharpton and others could be seen whispering to each other and reading the breaking news from an electronic tablet before Sharpton told the crowd.

On the other side of town, House Democratic leader Nancy Pelosi broke the news to the Congressional Black Caucus during one of its legislative conference sessions, just moments after Holder's work had been praised. Gasps could be heard in the crowd. "What?" one person said into a microphone.

Sharpton and others hope that Obama consults with the civil rights community before picking Holder's replacement, and Sharpton is pushing Holder to at least make an announcement on Ferguson before he leaves office. Advocates for Brown's family want the Justice Department to take over the criminal investigation of Brown's shooting death at the hands of Ferguson officer Darren Wilson and consider federal charges.

Meanwhile, the Justice Department has yet to say whether it will file federal civil rights charges in the Trayvon Martin case against George Zimmerman, the neighborhood watch volunteer who said he killed Martin in self-defense in February 2012 and was acquitted in a state trial.

In addition, the department will be monitoring its first elections in decades that will not have the protections of the most powerful provision of the Voting Rights Act — that all or parts of 15 states with a history of discrimination in voting, mainly in the South, get Washington's approval before changing the way they hold elections. The Supreme Court threw out that part of the act last year.

"We cannot let those who try to suppress our voices win," said Rep. Marcia Fudge, chair of the Congressional Black Caucus on Friday.

Not everyone in the rights community gives Holder glowing reviews on other matters.

And not everyone in the minority community is upset at Holder's impending departure.

"Holder managed to set back race relations, showed disrespect for the rule of law and undermined basic constitutional principles," said Horace Cooper, co-chair of the black conservatives leadership group Project 21. "Hopefully, his replacement will understand the difference between being the chief legal advisor for the implementation of a partisan agenda and being the chief law enforcement officer of the United States."

But others are convinced — and pleased — that the people Holder brought into the Justice Department will continue Holder's efforts.

"We are confident that the DOJ will be thorough and will continue to do its job," said John Gaskin III, member of the NAACP national board of directors and spokesman for the St. Louis County NAACP, which has been monitoring events in Ferguson. "We are confident that he's brought the right people to the Justice Department, (people) that are competent to do the job."