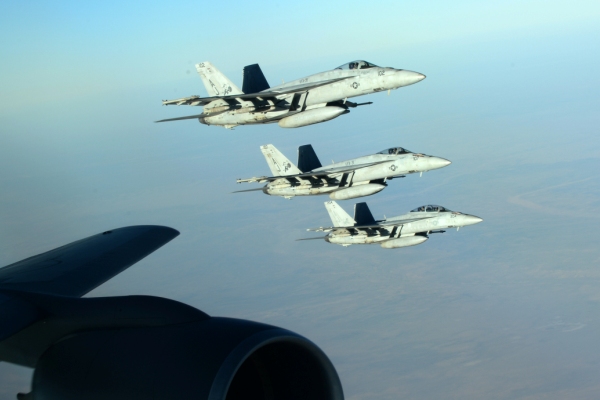 BEIRUT (AP) — American-led coalition warplanes destroyed four tanks belonging to the Islamic State group in eastern Syria on Friday, the U.S. military said, targeting the militants in a key oil-producing area that has generated millions of dollars in revenue for the extremist faction.

The strikes outside the city of Deir el-Zour on the Euphrates River marked the second consecutive day that the United States and its Arab allies have taken aim at the militants near the border with Iraq. Coalition planes pounded a dozen makeshift oil-producing facilities in the same area on Thursday, trying to cripple one of the militants' primary sources of cash — black market oil sales that the U.S. says produce up to $2 million a day.

Syrian activists said the American-led air campaign also hit the Tanak oil field as well as the Qouriyeh oil-producing area in Deir el-Zour on Friday. It said air raids also targeted the headquarters of the Islamic State group in the town of Mayadeen southeast of Deir el-Zour city.

The Observatory said the strikes caused an unknown number of casualties, and were believed to have been carried out by the coalition. Another activist collective, the Local Coordination Committees, also reported four strikes on Mayadeen that it said were conducted by the U.S. and its allies.

The U.S. Central Command confirmed that U.S. aircraft destroyed four Islamic State group tanks and damaged another. It did not have any information on strikes targeting oil facilities, but the military statement mentions raids by American forces only and not those by other coalition partners.

The Observatory reported another apparent coalition air raid on Islamic State positions outside the city of Hassakeh in northeastern Syria near the Iraqi border. Those strikes targeted an oil-production area, as well as vehicles the militants had brought in from Iraq and tried to bury in the ground to protect them, according to Observatory director Rami Abdurrahman.

The coalition, which began its aerial campaign against Islamic State fighters in Syria early Tuesday, aims to roll back and ultimately crush the extremist group, which has created a proto-state spanning the Syria-Iraq border. Along the way, the militants have massacred captured Syrian and Iraqi troops, terrorized minorities in both countries and beheaded two American journalists and a British aid worker.

The air assault has targeted Islamic State checkpoints, training grounds, oil fields, vehicles and bases as well as buildings used as headquarters and offices. Activists say the militants have cut back the number of gunmen manning checkpoints, apparently fearing more strikes. There has also been an exodus of civilians from Islamic State strongholds.

"Everywhere there are ISIS buildings, the people living around these buildings are leaving. They are moving far from ISIS buildings, either to other villages or to other areas in the same cities," said Abdurrahman, using the acronym of an alternative name for the group. "This has happened in Raqqa, in Deir el-Zour and in many towns and villages."

In towns and villages controlled by Syria's mainstream rebel factions, the airstrikes have garnered mixed reactions. Most people appear to condone hitting the Islamic State group, but question why President Bashar Assad's forces — which have killed thousands of people in the civil war — remain untouched.

Syrians are also critical of the U.S. decision to bomb the al-Qaida-affiliated Nusra Front in the opening salvo. The Nusra Front enjoys a degree of support among many in the opposition because its fighters are on the front lines against Assad.

One amateur video posted online shows people in the village of Taftanaz in Idlib province denouncing the airstrikes. One placard in English read: "What about the regime's terrorism?" Another video shows a similar protest in the village of Iblin. The videos appear genuine and correspond to other reporting by The Associated Press.

The coalition campaign in Syria expands upon the airstrikes the U.S. has been conducting on its own against the extremist faction for more than a month in Iraq. France joined the American effort in Iraq a week ago, and is considering whether to extend its airstrikes to Syria as well.

Denmark, meanwhile, announced Friday it would send seven F-16 fighter jets to take part in the airstrikes in Iraq, two days after the Netherlands did so. Britain and Belgium are also debating their involvement in the coalition Friday. The European countries do not plan to deploy in Syria.

The international operation targeting the Islamic State group adds another layer to Syria's civil war, a conflict that has already killed more than 190,000 people since the revolt against Assad began in March 2011.

While overshadowed by the coalition strikes against the Islamic State, fighting between Syrian government troops and rebels has raged on with its usual ferocity.

Assad's warplanes struck opposition-held towns in several provinces, including Hama in central Syria and Daraa in the south, while in Damascus, government soldiers backed by gunmen from the Lebanese Shiite militant Hezbollah group battled rebels on the edges of the suburb of Jobar, activists said.

The Islamic State group meanwhile continued to press its offensive near the Turkish border against Syrian Kurds, closing in on the border town of Ayn Arab, also known as Kobani. The militants have overrun dozens of villages the area in recent weeks as they look to clear out one of the few remaining pockets of resistance to their rule in northern Syria.

A senior Kurdish fighter overseeing the defense of Kobani, Ismet Sheikh Hassa, said that Islamic State fighters were advancing on the city from three sides Friday and were now launching mortars and rockets into Kobani itself.

He said that Kurdish fighters were outgunned, using old Russian weapons and assault rifles to fend off the attack.

"They have heavy weapons," including tanks, artillery and machine-guns, Hassa said by telephone. "The Islamic State is firing mortars and rockets over Kobani randomly. There are numerous civilian causalities."

Scores of Kurdish activists and fighters were seen removing barbed wire and crossing the Turkish border on Friday to help defend the city. As they crossed the frontier, they could be heard chanting "Long live Kobani!"