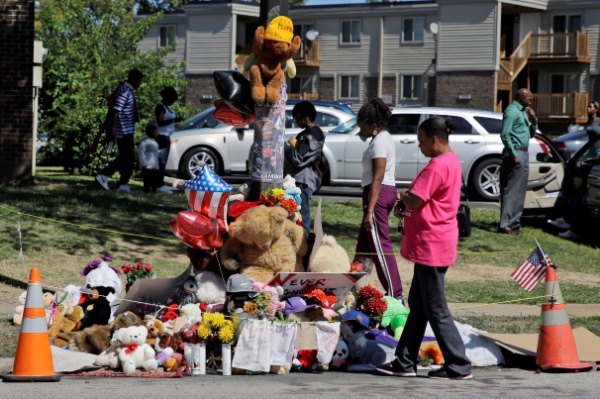 PHOTO: A woman walks past a new teddy bear memorial that is cordoned off on Tuesday, Sept. 23, 2014, in Ferguson, Mo., near the spot of where Michael Brown was shot by Ferguson police office Darren Wilson on Aug. 9. The original teddy bear memorial was destroyed by fire earlier Tuesday morning. Ferguson police spokesman Devin James says the cause of the fire is under investigation. (AP Photo/Jeff Roberson)

FERGUSON, Mo. (AP) — Department of Justice investigators on Wednesday heard one story after another about police harassment and brutality in Ferguson, the suburban St. Louis city where 18-year-old Michael Brown was shot and killed by a police officer last month.

At least 300 people crammed into a room at St. Louis Community College's Florissant Valley campus for the meeting hosted by the department's Civil Rights Division. The investigators were seeking direct input from residents who live in and near Ferguson.

"We go in and we try to figure out: 'Is (misconduct) happening? Is it a pattern? Is it violating the constitution? And most importantly, how do we fix it?'" said Christy Lopez, deputy counsel of the Civil Rights Division.

There was no public comment period but tables were set up for people to share their concerns privately with DOJ officials. And investigators got an earful.

Brandon Smith, 28, told investigators he moved away from Ferguson four years ago because he was constantly harassed. He said he was once cited for "manner of walking in roadway" and jailed on $1,000 bond for the misdemeanor. He said he posted bond and never got the money back.

Yolanda Lanns, 43, said her family was at a store where a disturbance broke out. Police assumed her husband was part of the fracas "because he was black," used a stun gun on him three times and took him to jail, Lanns said. She said he had nothing to do with the fight.

Joyce Washington, 55, of neighboring Cool Valley, said all three of her adults sons have been pulled over repeatedly in Ferguson.

"It's just because they're young, black men," Washington said. "Now they won't drive through Ferguson. I want to know why our children have to take alternative routes to get to our destinations."

Ferguson, with 21,000 residents, is two-thirds black, but only three of the 53 police officers are African-American.

The department's investigation of Ferguson police is focused on whether officers there use excessive force; whether constitutional rights of some residents are violated by traffic stops, searches and arrests; and if police engage in discriminatory practices.

Police Chief Tom Jackson was not at the meeting but has said he welcomes the investigation.

The meeting followed new unrest in Ferguson. Fire destroyed a memorial to Brown at the site of the shooting early Tuesday, generating new anger among some residents. Police say the cause of the fire is under investigation.

The fire may have been the spark for a violent protest Tuesday night. One store was damaged by looting, another was set on fire, and police were attacked with rocks and bottles. Two officers suffered injuries when they were hit by rocks. The New York Daily News has reported that some Missouri officers have been wearing bracelets with the words "I am Darren Wilson" the officer who killed Brown.

It was the latest of several incidents of unrest since Brown, who was black and unarmed, was shot to death by white police officer Darren Wilson on Aug. 9. A state grand jury is weighing if Wilson will face criminal charges, but a decision isn't expected until mid-October at the earliest.

Civil rights investigators are also looking at St. Louis County police, the county's juvenile justice system and policing at schools in the Ferguson area. Tables were also set up at the meeting for concerns in those areas.

Investigators did not say how long they expect the probe to take. Lopez said some changes will be recommended before it is complete.

For example, she said residents complained that officers too often don't wear name plates, making it difficult to point out those suspected of wrongdoing. Jackson assured the division that officers will immediately start wearing name tags.