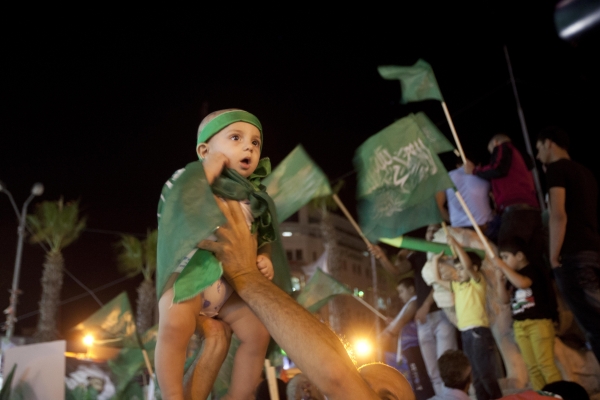 PHOTO: A Palestinian Hamas supporter holds up a little girl wearing green flags as people gather in the streets during celebrations for the cease-fire between Palestinians and Israelis, in the West bank city of Ramallah, Tuesday, Aug. 26, 2014. Israel and Hamas agreed Tuesday to an open-ended cease-fire, halting a seven-week war that killed more than 2,200 people, the vast majority Palestinians, left tens of thousands in Gaza homeless and devastated entire neighborhoods in the blockaded territory. (AP Photo/Majdi Mohammed)

RAMALLAH, West Bank (AP) It's a busy week in Mideast diplomacy, book-ended by the launch of Israel-Hamas talks about a border deal for blockaded Gaza and the Palestinian president's U.N. speech about a new strategy for dealing with Israel.

The talks about Gaza's future seem to be a long shot, and failure could set the stage for another Israel-Hamas war, even if neither side wants it. In another obstacle to an agreement, tensions are mounting between Palestinian rivals Hamas and Fatah, the movement of Western-backed Palestinian President Mahmoud Abbas, over who will run Gaza.

Meanwhile, Abbas' apparent shift to inviting international pressure on Israel, rather than relying solely on so far unsuccessful U.S. mediation, is poised to strain ties with Washington.

The following is a look at what lies ahead.

Egypt is hosting a brief round of indirect talks Tuesday in Cairo between an Israeli and a Palestinian delegation, the latter including Hamas members, on stable border arrangements for Gaza. Israel and Egypt have enforced border closures to varying degrees since the Islamic militant Hamas seized Gaza from Abbas in 2007. The blockade has prevented most exports from Gaza and kept the vast majority of 1.8 million Palestinians confined to the tiny territory on the Mediterranean. Israel and Hamas have fought three wars since late 2008, the most recent one for 50 days in July and August, in part because Hamas was trying to shake off the constraints.

Neither side appears eager to resume fighting, but they could be dragged into another war if no solution is found. Hamas has used rocket fire at Israel as a means of political pressure. Israeli leaders say they will not tolerate attacks from Gaza and will retaliate harshly.

Gaps on a comprehensive deal are wide. Hamas has rejected demands to disarm Israel's prerequisite for lifting the blockade. Both Israel and Egypt view Abbas as a guarantor of any new Gaza deal. It is unlikely Egypt would ease restrictions at its Rafah border crossing with Gaza unless forces loyal to Abbas are deployed there.

The No. 2 in Hamas, Moussa Abu Marzouk, has said his group does not want war, but suggested more fighting is inevitable if the blockade remains.

Palestinian analyst Abdel Majed Sweilim said Hamas can't afford another war because of the devastation caused by the most recent one, including more than 2,100 Palestinians killed and more than 18,000 homes destroyed or severely damaged. "The people of Gaza won't let Hamas embark on this adventure again," he said. 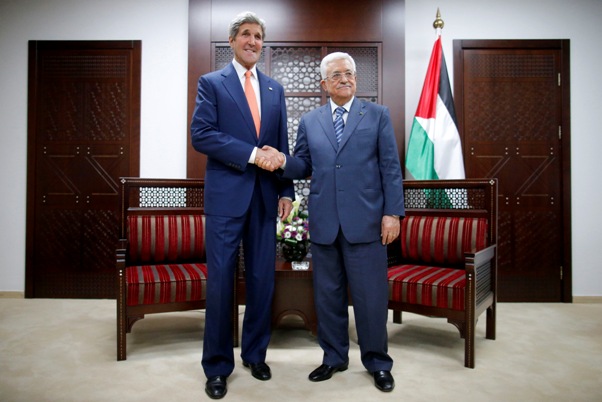 PHOTO: In this July 23, 2014, file photo, U.S. Secretary of State John Kerry meets with Palestinian Authority President Mahmoud Abbas, right, in Ramallah. It's a busy week in Mideast diplomacy, book-ended by the launch of Israel-Hamas talks about a border deal for blockaded Gaza and the Palestinian president's U.N. speech scheduled for Friday, Sept, 26, 2014, about a new strategy for dealing with Israel. (AP Photo/Charles Dharapak, File)

The blame-trading between the long-time rivals has become more frequent since the end of the Gaza war, a sign that an agreement on running the territory is not within reach.

In the spring, Abbas worked out a tentative agreement with Hamas under which he would head a temporary unity government of experts in both the West Bank and Gaza until elections could be held. However, major issues were left unresolved, including the fate of 40,000 government employees hired during the Hamas era and control over the Gaza security forces.

Hamas was mired in a severe financial crisis when it struck the deal, but has become emboldened since the end of the war because fighting with Israel boosted its popularity among Palestinians.

Abbas, in turn, refuses to make concessions to Hamas and insists on sweeping powers in Gaza, said an aide, Azzam al-Ahmad.

Hamas' second-in-command Musa Abu Marzouk and al-Ahmad held a preliminary meeting in Cairo on Monday behind closed doors, ahead of the start of official reconciliation talks on Wednesday.

Failure to establish an Abbas-led government will harm Gaza reconstruction efforts. Egypt is hosting a pledging conference for Gaza on Oct. 12, but donor countries will likely hold back if Hamas â shunned by the West as a terror group refuses to step aside.

The Gaza war has weakened Abbas domestically, with Hamas enjoying a surge of popularity among Palestinians for fighting Israel. Abbas is under pressure at home to come up with a new political strategy after his repeated attempts to establish a Palestinian state through U.S.-mediated negotiations with Israel ended in failure.

Abbas adviser Nabil Abu Rdeneh said the Palestinian leader would present a new strategy in a speech to the U.N. General Assembly on Friday. In recent weeks, Abbas and his aides have hinted at the outlines.

Under the plan, Abbas would ask the U.N. Security Council to issue a binding resolution, with a specific date for ending Israel's occupation of the West Bank, Gaza Strip and east Jerusalem. Captured by Israel in 1967, the territories were recognized by the U.N. General Assembly in 2012 as making up a state of Palestine.

In the event of a likely U.S. veto at the Security Council, Abbas would seek membership in dozens of international institutions and agencies, including the International Criminal Court.

Joining the court could potentially open the door to war crimes charges against Israel, both for its military actions in Gaza and for ongoing construction of Jewish settlements on occupied lands. Hamas could also be exposed to war crimes charges for firing rockets at Israeli cities, but it has told Abbas it wants him to join the ICC.

Abbas is to meet with U.S. Secretary of State John Kerry on Tuesday.

The U.S. has urged Abbas not to turn to the Security Council, but has not offered an alternative, said a Palestinian official, speaking on condition of anonymity because he was not allowed to discuss internal deliberations with the media. Abbas will use meetings on the sidelines of the General Assembly to gauge international support for his plan, said the official.