Census Bureau: Wages Up for Black Men, Down for Black Women 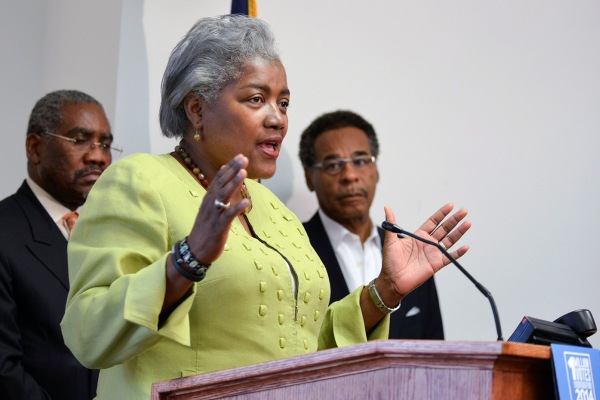 Donna Brazile, vice chair of Voter Registration and Participation for the Democratic National Committee said that the Black vote is crucial for Democratic successes all across the country. Photo by Freddie Allen/NNPA

WASHINGTON (NNPA) – The Black-White income gap narrowed in 2013 with Black men who worked full-time, year-round experiencing the greatest gain in earnings among all adult workers, according to the current population reports on income and poverty released by the Census Bureau.

Valerie Wilson, director of the Program on Race, Ethnicity, and the Economy at the Economic Policy Institute (EPI), a Washington, D.C.-based think tank, said that from 2012 to 2013, the Black-White income gap narrowed from 58.4 cents to 59.4 cents for every dollar of White median household income.

Even though Black men suffer with the highest unemployment rates in the country, during the recovery period following the recession, Black men who worked full-time, year-round experienced a 1.6 percent gain in median earnings, compared to White men whose earnings fell 2.1 percent over the same period.

From 2012-2013, earnings for Black men who were employed full-time, year-round jumped 4.5 percent, while earnings for White men declined 1.8 percent over that same period.

For the first time since 2006, the national poverty rate decreased, but “the number of people in poverty at the national level was not statistically different from the previous year’s estimate,” according to the report.

The report continued: “Hispanics were the only group among the major race and ethnic groups to experience a statistically significant change in their poverty rate and the number of people in poverty. For Hispanics, the poverty rate fell from 25.6 percent in 2012 to 23.5 per- cent in 2013, while the number of Hispanics in poverty fell from 13.6 million to 12.7 million.”

According to the report, 11 million Blacks were living in poverty in 2013.

Wilson said that the measure of child poverty is directly related to the income and wages of their parents.

During the recovery, Black women have taken jobs in the leisure and hospitality sector, in restaurants and hotels, as home health aides, and in retail where workers’ hours can be unpredictable, said Wilson.

“We know that a lot of African American children live in single-parent households headed by Black women, and if earnings for Black women are declining, it shouldn’t be much of surprise if poverty rates for Black children didn’t go down,” said Wilson

She said that economic reforms such as increasing the minimum wage and extending unemployment insurance benefits would not only benefit workers, but they would also benefit the children who live in those households.

Josh Bivens, the research and policy director at EPI, said that fiscal austerity and the fast decline in public spending have depressed wages and income growth.

Bivens said that if we want the coming years to look more like 2013 for the bottom half of the income ladder and less like the five years that came before, we need to see continuing labor market improvement.

He warned, “We may have just turned the corner in terms of pushing up wages and incomes for the bottom half of the income distribution and it would be a real tragedy to pull the plug on that.”