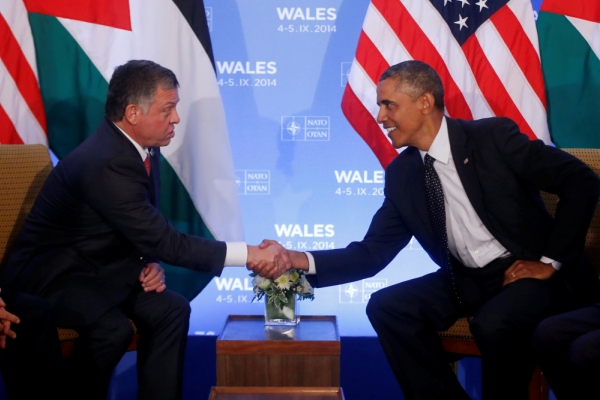 PHOTO: In this Thursday, Sept. 4, 2014, file photo, President Barack Obama shakes hands with Jordan's King Abdullah II during their meeting at the NATO summit at Celtic Manor in Newport, Wales. As the United States looks to stitch together a coalition to tackle the extremist Islamic State group, the Obama administration will have to overcome the reluctance of Mideast allies who are deeply frustrated with a White House that they believe has been naive, fickle and weak on Syria’s civil war. (AP Photo/Charles Dharapak, File)

WASHINGTON (AP) — Opening a new military front in the Middle East, President Barack Obama authorized U.S. airstrikes inside Syria for the first time Wednesday night, along with expanded strikes in Iraq as part of "a steady, relentless effort" to root out Islamic State extremists and their spreading reign of terror.

"We will hunt down terrorists who threaten our country, wherever they are," Obama declared in a prime-time address to the nation from the White House. "This is a core principle of my presidency: If you threaten America, you will find no safe haven."

The U.S. began launching limited airstrikes against Islamic State targets in Iraq early last month at the request of former Iraqi Prime Minister Nouri al-Maliki. The American firepower provided a significant boost to Iraqi forces, including the Kurdish peshmerga fighters, battling to win back land lost to the militant group.

The Sunni extremists seized roughly a third of Iraq and Syria in their rampage this summer, declaring a self-styled caliphate in areas under their control where they apply their strict interpretation of Islamic law.

Obama announced that he was dispatching nearly 500 more U.S. troops to advise and assist Iraqi security forces, as well as conduct intelligence and reconnaissance flights, bringing the total number of American forces sent there this summer to more than 1,500. He also urged Congress anew to authorize a program to train and arm Syrian rebels who are fighting both the Islamic State militants and Syrian President Bashar Assad.

Obama's plans amounted to a striking shift for a president who rose to political prominence in part because of his early opposition to the Iraq war. While in office, he has steadfastly sought to wind down American military campaigns in the Middle East and avoid new wars — particularly in Syria, a country where the chaos of an intractable civil war has given the Islamic State space to thrive and move freely across the border with Iraq.

Speaking on the eve of the anniversary of the Sept. 11, 2001, attacks, Obama's plans were also an admission that years of American-led war in the Middle East have not quelled the terror threat emanating from the region.

Obama insisted that his plan to "degrade and ultimately destroy" the Islamic State militants would not involve returning U.S. combat troops to the Middle East. Even so, he acknowledged that "any time we take military action, there are risks involved, especially to the servicemen and women who carry out these missions."

"But I want the American people to understand how this effort will be different from the wars in Iraq and Afghanistan. It will not involve American combat troops fighting on foreign soil," he added.

The president's speech, which lasted about 15 minutes, followed a summer of deliberation at the White House over how to respond to the violent Islamic State militants. While administration officials have said they are not aware of a credible threat of a potential attack by the militants in the U.S., they say the group poses risks to Americans and interests across the Middle East. Officials are also concerned about the prospect that Westerners, including Americans, who have joined the militant group could return to their home countries to launch attacks.

In recent weeks, the militants have released videos depicting the beheading of two American journalists in Syria. The violent images appear to have had an impact on a formerly war-weary public, with multiple polls in recent days showing that the majority of Americans support airstrikes in both Iraq and Syria.

The U.S. began launching limited airstrikes against Islamic State targets in Iraq earlier this summer at the request of that country's former prime minister. But Obama vowed that he would not commit the U.S. to a deeper military campaign until Iraq formed a new government that allowed greater participation from all sects, a step Iraqi leaders took Tuesday. 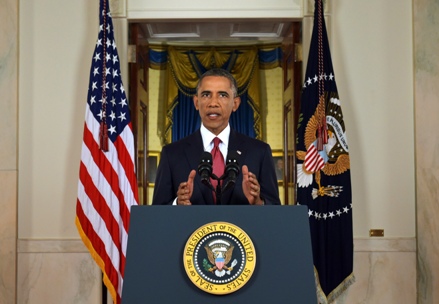 PHOTO: President Barack Obama addresses the nation from the Cross Hall in the White House in Washington, Wednesday, Sept. 10, 2014. In a major reversal, Obama ordered the United States into a broad military campaign to “degrade and ultimately destroy” militants in two volatile Middle East nations, authorizing airstrikes inside Syria for the first time, as well as an expansion of strikes in Iraq. (AP Photo/Saul Loeb, Pool)

Officials said Obama plans to proceed with both the broader airstrikes in Iraq and the strikes in Syria without seeking new authorization from Congress. Instead, he is to act under a use-of-force authorization Congress passed in the days after 9/11 to give President George W. Bush the ability to go after those who perpetrated the terror attacks. Obama has previously called for that authorization to be repealed, but he has also used it as support for strikes against terror targets in Yemen and Somalia.

Obama said his approach in Syria is modeled after those long-running U.S. counterterrorism campaigns. But it is different in important ways, starting with the fact that it marks the first time since 9/11 that a U.S. president has authorized the bombing of terror targets in another nation without seeking permission or at least notifying it in advance.

House Speaker John Boehner, R-Ohio, praised Obama for acknowledging the "grave and growing threat" that Islamic extremists pose, but he said Obama was coming to that conclusion far too late.

"He has finally begun to make the case the nation has needed him to make for quite some time: that destroying this terrorist threat requires decisive action and must be the highest priority for the United States and other nations of the free world," Boehner said.

As if to answer the criticism that he has been too cautious, Obama declared of his plan: "This is American leadership at its best."

Obama is seeking authorization from Congress for a Pentagon-led effort to train and arm more moderate elements of the Syrian opposition. Even before his remarks, congressional leaders were grappling with whether to support that request and if so, how to get such a measure through the fractured legislature before the November elections.

The White House wants Congress to include the authorization in a temporary funding measure lawmakers are expected to vote on before adjourning later this month. Republicans have made no commitment to support the request and the House GOP has so far not included the measure in the funding legislation.

While the CIA currently runs a small program to arm the rebels, the new version would be more robust. Obama asked Congress earlier this year to approve a $500 million program to expand the effort and put it under Pentagon control, but the request stalled on Capitol Hill.

Some of Obama's own advisers, including former Secretary of State Hillary Rodham Clinton, pressed him to arm the rebels early in their fight against Assad. But Obama resisted, arguing that there was too much uncertainty about the composition of the rebel forces. He also expressed concern about adding more firepower to an already bloody civil war.

The White House announced Wednesday that it was also providing $25 million in immediate military assistance to the Iraqi government as part of efforts to combat the Islamic State.

The Treasury Department will also step up efforts to undermine the Islamic State group's finances. David Cohen, Treasury's undersecretary for terrorism and financial intelligence, wrote in a blog post that the U.S. would be working with other countries, especially Gulf states, to cut off the group's external funding networks and its access to the global financial system.

The U.S. has been pressing allies in Europe, the Middle East and elsewhere to help with efforts to degrade the terror group.

France's foreign minister said Wednesday that his country was ready to take part in airstrikes against extremist fighters in Iraq if needed. And the German government announced that it was sending assault rifles, ammunition, anti-tank weapons and armored vehicles to Kurdish forces in Iraq fighting, breaking with Berlin's previous reluctance to send weapons into conflicts.

Secretary of State John Kerry, who met with Iraqi leaders in Baghdad Wednesday, was also scheduled to attend a conference with Arab leaders Thursday to discuss their role in confronting the militants.

Syrian and Iranian officials criticized the Obama administration on Thursday for excluding them from an international coalition coming together in the battle against the Islamic State group, while a state-run Syrian daily warned that unauthorized U.S. airstrikes on Syria may trigger the "first sparks of fire" in the region.

The strongest reaction, however, came from Russia, Syrian President Bashar Assad's main international ally. A Russian Foreign Ministry statement said such military action without a U.N. Security Council resolution "would be an act of aggression and flagrant violation of international law."

But the Syrian National Coalition said that airstrikes need to be coupled with a strategy for ultimately toppling Assad.

"We welcome this new strategy," said Hoshyar Zebari, a Kurdish politician and one of Iraq's newly-appointed deputy prime ministers. "We think it will work with the cooperation of the indigenous local forces like Iraqi Security Forces, the Kurdish peshmerga and other forces."

"There is an urgent need for action. People cannot sit on the fence. This is a mortal threat to everybody," he told The Associated Press.