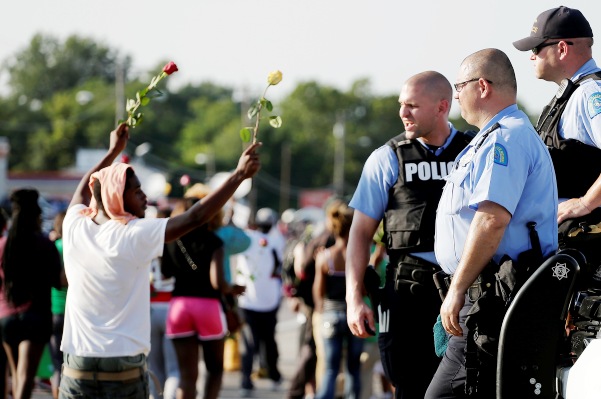 In this Aug. 19, 2014 file photo, police watch as protesters march for Michael Brown, who was killed by police Aug. 9 in Ferguson, Mo. The Ferguson City Council, set to meet Tuesday, Sept. 9, 2014, for the first time since the fatal shooting of Brown, said it plans to establish a review board to help guide the police department and make other changes aimed at improving community relations. (AP Photo/Charlie Riedel, File)

FERGUSON, Mo. (AP) — The Ferguson City Council, set to meet Tuesday for the first time since the fatal shooting of an unarmed black 18-year-old by a white police officer, said it plans to establish a review board to help guide the police department and make other changes aimed at improving community relations.

Those would include reducing the revenue from court fines that are used for general city operations in the St. Louis suburb and reforming court procedures, according to a statement from a public relations firm hired by Ferguson. Critics say reliance on court revenue and traffic fines to fund city services more heavily penalizes low-income defendants who can't afford private attorneys, and who are often jailed for not promptly paying those fines.

City leaders vowed after Brown's death to boost minority recruiting and outreach efforts at City Hall and throughout the community.

"The overall goal of these changes is to improve trust within the community and increase transparency, particularly within Ferguson's courts and police department," Councilman Mark Byrne said in the statement. "We want to demonstrate to residents that we take their concerns extremely seriously."

Ferguson, a city of 21,000, is about 70 percent black. Its 53-member police department has just three black officers. The mayor and five of the six City Council members are white.

A 2013 report by the Missouri attorney general's office found that Ferguson police stopped and arrested black drivers nearly twice as often as white motorists, but were also less likely to find contraband among the black drivers.

In Ferguson, court fines and fees accounted for $2.6 million in the last fiscal year, or nearly one-fifth of the city budget. That's nearly twice as much as the city collected just two years earlier.

That doesn't hold true for the county as a whole, which collects just a fraction of 1 percent of its revenue from court fines and fees.

A St. Louis legal group that represents indigent defendants recently singled out the courts in Bel-Ridge, Ferguson and Florissant as "chronic offenders" among a group of 30 municipal courts where problems were documented.

The report by the nonprofit ArchCity Defenders found dozens of cases where children and members of the public were improperly banned from attending open court session. In Ferguson, defendants described a system so overwhelmed by crowds that bailiffs would lock the door five minutes after the scheduled start time — and then issue failure to appear warrants for those who arrived late and were locked out. In Bel-Ridge, multiple defendants were in court to contest citations for not registering with the city garbage collection service.

"These policies unintentionally push the poor further into poverty, prevent the homeless from accessing the housing, treatment and jobs they so desperately need to regain stability in their lives, and violate the Constitution," the report concluded.

Those widespread practices led the St. Louis County circuit judge who oversees local courts to send a written warning to municipal judges and clerks to keep their courtrooms open to the public.

That inquiry is separate from a federal probe into Brown's death, which a local grand jury is also investigating.

Police have said the shooting came after a scuffle that broke out after Wilson told Brown and a friend to move out of the street and onto a sidewalk. Police say Wilson was pushed into his squad car and physically assaulted. Some witnesses have reported seeing Brown's arms in the air before the shooting in an act of surrender. An autopsy paid for by Brown's family concluded that he was shot six times, twice in the head.

A Ferguson city council meeting that had been scheduled for late August was canceled shortly beforehand after city officials said they were unable to find a location that would accommodate the large crowd expected. Tuesday's meeting has been moved from Ferguson City Hall to a nearby church that was the site of a Brown memorial service shortly after his death.