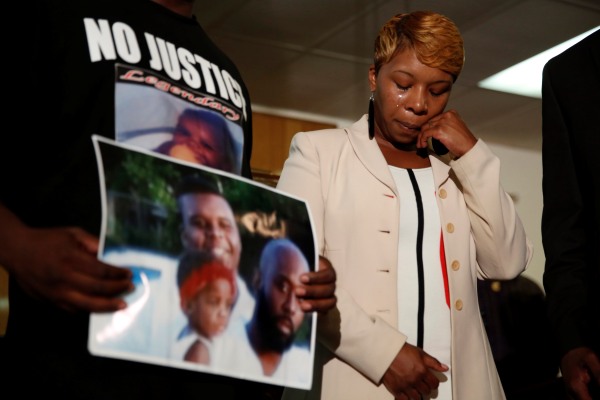 PHOTO: In this Aug. 11, 2014 file photo, Lesley McSpadden, the mother of 18-year-old Michael Brown, wipes away tears as Brown's father, Michael Brown Sr., holds up a family picture of himself, his son, top left, and a young child during a news conference in Jennings, Mo. Lingering questions about Michael Brown could be answered Wednesday as two news organizations seek the release of any possible juvenile records for the unarmed 18-year-old who was shot by a police officer last month.(AP Photo/Jeff Roberson, File)

A 45-minute hearing before a St. Louis County family court judge didn't reveal whether Michael Brown has such a record. However, a lawyer for the county juvenile office, which opposes the media requests, said only that Brown was never charged with a serious felony such as murder, robbery or burglary. Nor did he face any juvenile charges at the time of his death.

Juvenile records are confidential in Missouri, but under state law, being charged with certain violent crimes removes those juvenile privacy protections. Police have said Brown had no adult criminal record.

"There is interest in knowing Michael Brown's background," Martineau said. "What we're asking for here is just verification, one way or the other ... We're acting in a vacuum here."

"The court of public opinion does not require the release of juvenile records," she said.

Brown family attorney Anthony Gray attended the hearing and sat next to Harcourt but did not speak in court. Afterward, he called the requests by the St. Louis newspaper and a northern California online journalist "shameful."

"The true motivation for the request of the records is character assassination," he said.

Gray argued that even if Brown did have a brush with the juvenile court system — including for such low-level offenses as truancy — those details are irrelevant to the question of whether Wilson acted with excessive force.

"I don't know what would be the relevance of that ... after this young man was executed in broad daylight," he said.

The civil lawsuit by Charles C. Johnson of Fresno, California, cites a 1984 Missouri Court of Appeals ruling that allowed the release of the juvenile records of an 18-year-old who was killed by a security guard while shoplifting at a supermarket in 1979.

That man's mother challenged a trial court's decision to release the records to defendants who were hoping to determine the 18-year-old's lost earning capacity.

Johnson is editor-in-chief of the website GotNews.com. He also attended the hearing.

Judge Ellen Levy Siwack did not indicate how long she would take before releasing a ruling.

Also on Wednesday, a grand jury was scheduled to meet for the third time since Brown's death to consider evidence in a possible criminal case. The police shooting is also being investigated by the U.S. Justice Department's Civil Rights Division.