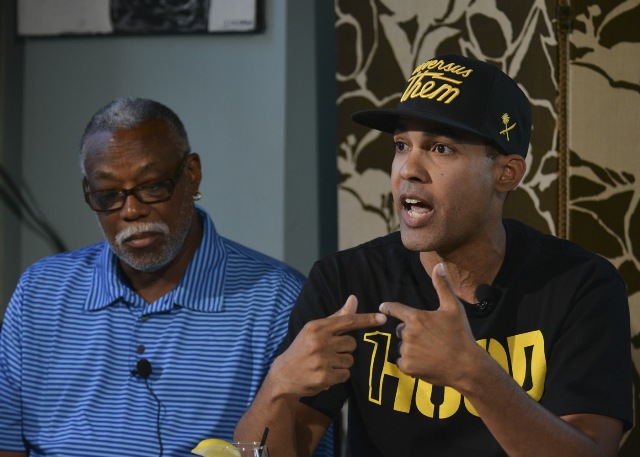 WASHINGTON (NNPA) – During a rousing, standing-room only town hall discussion dedicated to the shooting death of Michael Brown in Ferguson, Mo., and police killings of young, Black men across the nation, Ron Daniels, declared, “a state of emergency in Black America.”

Daniels, president of the Institute of the Black World 21st Century (IBW), a group devoted to the social, political and economic empowerment of the Black community, said that there are two Black Americas.

“Some Black people are doing quite well, unless they get stopped for driving while Black, they’re living in the suburbs and exurbs,” said Daniels. “But in the urban inner city areas, America’s dark ghettos, as Malcolm X would say, ‘people are catching more hell than ever before.’”

One of those people was Michael Brown, an unarmed Black teenager who was shot to death in the middle of the road in Ferguson, Mo., by Darren Wilson, a White police officer. Brown’s lifeless body was left face down in the street for more than four hours as onlookers snapped photos and videos with their smartphones and news of the shooting spread on social media.

During the town hall discussion, Hilary Shelton, Washington, D.C. bureau chief for the National Association for the Advancement of Colored People (NAACP), said that he grew up in St. Louis and knows Ferguson very well and saw it transition from a town that was majority White to one that is 67 percent Black.

Shelton noted that only three of the 53 policemen that serve Ferguson are Black. The mayor is a White Republican and five out of six councilmembers are also White.

“When you have a scenario where everything is set up as if it were some occupying force and that occupying force is suppressing rather than protecting those communities, you end up with the kind of response that we got with Michael Brown,” explained Shelton.

Ron Hampton, a former executive director of the National Black Police Association, said that the Black community can’t look at the Michael Brown killing as a single incident in time.

“[The Michael Brown shooting] is the continuation of the assault and the attack on Black men and women in the Black community,” stated Hampton. “The militarization of police departments started after Vietnam. Police departments received military equipment after the Vietnam War, after Desert Storm, and after the wars in Iraq and Afghanistan.”

And now that equipment is being used in the War on Drugs waged in the Black communities.

Adding Black men and women to the police department is not enough, said Hampton.

“You can add six more police officers or 20 more Black police officers to the Ferguson police, but if we don’t address the systemic issues around the culture the policies and practices of the police department, residents will continue to be brutalized by police officers,” he said.

Nkechi Taifa, senior policy analyst for the Open Society Foundations, said that the treatment of Brown’s body after he was shot and killed was reminiscent of how Blacks were treated after they were lynched, a tactic used to instill fear in the hearts of slaves and later freed Blacks following the Civil War.

Jasiri X, a hip hop artist and activist who traveled to Ferguson to protest the killing of Michael Brown, said that George Zimmerman was found not guilty in the shooting death of Trayvon Martin, an unarmed Black teenager in Sanford, Fla., and although Michael Dunn was found guilty of attempted murder, he was not found guilty in the killing of Jordan Davis, an unarmed Black teenager in Jacksonville, Fla.

“If we are continually shot down and no one is to blame, then what do you think is going to happen if this happens over and over and over again?” asked Jasiri X. “Ferguson is simmering right now, but so is New York City, so is Chicago, and so is Los Angeles and Washington, D.C.”

Jasiri X continued: “If Darren Wilson is not indicted, what do you want us to do? If you’re not going to give us justice, we have to ask what’s wrong if we take justice?”

Barbara Arnwine, president and executive director of the Lawyers’ Committee for Civil Rights Under Law, asked a different question.

“The question is: What is the Justice Department going to do? The Justice Department can bring civil rights charges in this case, but if they’re going to do it, they can’t drag their feet,” said Arnwine. “Remember, this administration goes out in December 2016. It is imperative that charges are brought right now. All the elements that are required are there. The question of intent will be the hardest that they will have to deal with.”

Arnwine added: “We don’t want to be sitting here a year from now like we are with the [civil rights case against George Zimmerman] asking, ‘what happened?’”

The panelists presented a range of recommendations from mandating body-worn cameras and dashboard cameras for all police departments to police accountability review boards and building a comprehensive database of shootings involving law enforcement officials.

Taifa said the Black community has to be more creative in seeking justice, possibly turning to the United Nations and filing a petition under International Convention on the Elimination of All Forms of Racial Discrimination.

Daniels lamented the missed opportunity to use economic sanctions and boycotts to force reforms around the “Stand Your Ground” law in Florida following the tragedy of the Martin shooting and the not guilt verdict in the George Zimmerman trial. Daniels said that no national leaders would call for an economic sanctions campaign in Florida and wondered aloud if their corporate ties had anything to do with their silence.

“The economic benefits from this chump change that [corporations] are giving us is not worth taking the fire out of our movement,” said Daniels.

Jasiri X said that he was concerned about the intergenerational divide that he observed during the protests in Ferguson.

“When night came and the young people had to face off against tanks, snipers, and tear gas, they felt abandoned by the elder leadership,” said Jasiri X.

Jasiri X stressed the importance for elders in the Civil Rights Movement to support young leaders as they organize new groups to fight for social justice and political reform.

Jasiri X said that actor and civil rights activist Harry Belafonte met with more than 40 hip hop artists last year to guide them in using their art to talk about mass incarceration, violence in the community, and violence against women.

“[Belafonte’s] not trying to grab the mic and get on the mic,” said Jasiri X. “He’s using his wisdom and knowledge to guide and direct us.”

Daniels called on young civil rights activists such as Jasiri X to take the lead in the current movement around police violence, calling it a matter of principle.

“Those that are being most affected, those that are being stopped and frisked and shot down on the streets and harassed are young people. They should be at the center and the lead,” said Daniels. “We need to step back, we need step aside, we need to move over and let them speak.”