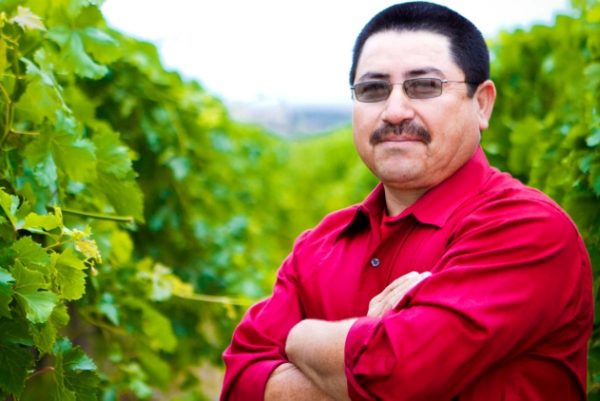 PHOTO: This photo taken May 21, 2014, provided by Tanya X. Leonzo shows Raul Garcia standing in a grape vineyard in Bakersfield, Calif. Garcia is a virtually unknown Central California farmworker who got on the ballot as a write-in candidate for a house seat. Garcia has a question for incumbent, House Majority Leader Kevin McCarthy of Calif., “While we are waiting for you on immigration reform, who should be harvesting America’s food?” (AP Photo/Tanya X. Leonzo)

WASHINGTON (AP) — Raul Garcia has a question for Kevin McCarthy, the House's No. 2 Republican: "While we are waiting for you on immigration reform, who should be harvesting America's food?"

It's a provocative query and the foundation of Garcia's long-shot challenge to McCarthy, a four-term incumbent who rose to power after another GOP leader thought unsinkable, Virginia's Eric Cantor, fell to an unknown candidate in a primary.

Garcia's is a longshot challenge. He's an unknown California farm worker who got on the ballot as a write-in candidate. But he now has backing from labor unions, and ambitions to hold the new House majority leader to account in his own, agriculture-rich back yard for the failure of the Republican House to move immigration legislation.

"My idea is to send a message that the whole country will hear," Garcia said in Spanish in a phone interview from Wasco, Calif., after a night shift hauling tomatoes. "The farmworkers are the ones who put the food on the tables of the whole country. And we are not being represented."

Garcia's candidacy comes with immigration legislation dead in Congress and President Barack Obama preparing to act on his own to address the dysfunctional system, including potentially extending work permits and relief from deportation to millions.

That could have a profound impact on McCarthy's district at the southern tip of California's Central Valley, where many thousands of workers, many of them here illegally, labor in the fields harvesting grapes, almonds, lettuce and other crops.

Garcia works alongside the laborers each day, and through his candidacy he hopes to highlight the reality that despite Congress' inaction the nation is as reliant as ever on their labor. "It doesn't have to do with money, it has to do with conscience," he said.

The economy and demographics of McCarthy's district, which is more than one-third Latino, make immigration a pressing question there. But to the frustration of advocates for overhauling the immigration system, McCarthy has won re-election to four terms without answering their demands. A few other California Republicans have embraced comprehensive immigration legislation— like the bill that passed the Senate last year before dying in the House. But McCarthy rejected that approach, joining other House GOP leaders in calling for border security first and a step-by-step approach.

McCarthy's campaign aides declined to address Garcia's candidacy but provided a statement from the majority leader in which he promises: "I will continue to fight for our community and give our hard working families a strong voice in Washington." The statement mentions reducing regulation and taxes, a reliable water supply and energy production, but not immigration.

Over time, McCarthy and other Republicans may have to recalibrate their stances on immigration in response to a changing electorate. But for the short term, McCarthy appears headed for easy re-election in November. Republicans are expected to retain the House majority.

Garcia and his backers in California's historic United Farm Workers union have few illusions they can interrupt that. But when they saw that McCarthy didn't even face a challenger in California's quirky all-party primary in June, they saw an opportunity to try to get him to engage.

California's system guarantees spots on the general election ballot to the top two vote-getters of any party in the primary. Since McCarthy was running unopposed, that meant a write-in candidate could qualify to oppose him in November without having to go through the arduous process of collecting signatures or paying a fee to get on the primary ballot. Garcia and a handful of others mounted write-in candidacies, and Garcia emerged on top with 313 signatures, enough to guarantee him a spot against McCarthy in the fall.

Garcia, 46, is a Mexican immigrant who speaks little English and says he entered the U.S. illegally at age 17 to look for work. He became a naturalized citizen under the amnesty signed by President Ronald Reagan in 1986 and has spent a quarter-century picking crops in the region.

From those beginnings, he is taking on one of the most powerful Republicans in Washington, a politically savvy lawmaker who knows his district well. McCarthy is unlikely to make Cantor's mistake of spending too much time away from his district.

But even if he can't hope to defeat McCarthy, Garcia wants at least to get him to confront the question of where inaction on immigration legislation leaves America's workers. "I want Congressman McCarthy to give us a straight answer," Garcia says in his campaign ad.