WHO: Ebola Cases Could Eventually Reach 20,000 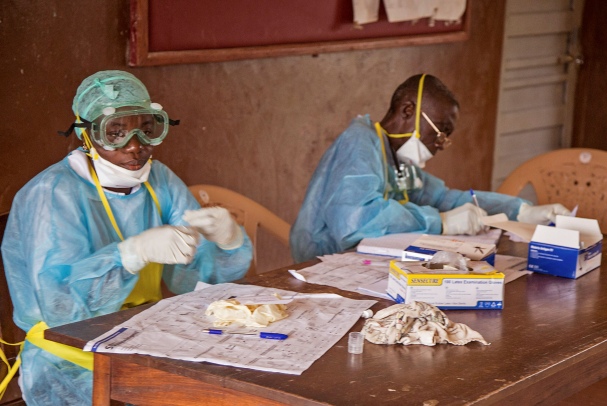 PHOTO: In this photo taken Saturday, Aug. 9, 2014, health worker wearing protective clothing and equipment, out of fear for the deadly Ebola virus, sit at a desk at the Kenema Government Hospital situated in the Eastern Province in Kenema, 300 kilometers, (186 miles) from the capital city of Freetown, Sierra Leone. Over the decades, Ebola cases have been confirmed in 10 African countries, including Congo where the disease was first reported in 1976. But until this year, Ebola had never come to West Africa. (AP Photo/ Michael Duff)

GENEVA (AP) — The Ebola outbreak in West Africa eventually could exceed 20,000 cases, more than six times as many as are now known, the World Health Organization said Thursday.

A new plan released by the U.N. health agency to stop Ebola also assumes that the actual number of cases in many hard-hit areas may be two to four times higher than currently reported. If that's accurate, it suggests there could be up to 12,000 cases already.

Currently, about half of the people infected with Ebola have died, so in the worst case scenario outlined by the WHO, the death toll could reach 10,000.

"This far outstrips any historic Ebola outbreak in numbers. The largest outbreak in the past was about 400 cases," Dr. Bruce Aylward, WHO's assistant director-general for emergency operations, told reporters.

He said the agency does not necessarily expect 20,000 cases, but a system must be put in place to handle a massive increase in the numbers.

Separately Thursday, the U.S. National Institutes of Health announced it will start testing an experimental Ebola vaccine in humans next week. The vaccine was developed by the U.S. government and GlaxoSmithKline and the preliminary trial will test the shot in healthy U.S. adults in Maryland. At the same time, British experts will test the same vaccine in healthy people in the U.K., Gambia and Mali.

The vaccine trial was accelerated in response to the outbreak. Preliminary results to determine if the vaccine is safe could be available within months.

The outbreak is posing a unique challenge, Aylward said, because there are multiple hotspots in several countries, including in densely populated urban areas. Previous outbreaks had happened in a single, remote area.

In new figures, the agency said 1,552 people have died from the virus from among the 3,069 cases reported so far in Liberia, Sierra Leone, Guinea and Nigeria. More than 40 percent of the cases have been identified in the last three weeks, the U.N. health agency said, adding that "the outbreak continues to accelerate."

The new plan for handling the outbreak aims to stop Ebola transmission in affected countries within six to nine months and prevent it from spreading internationally.

The goal is to take "the heat out of this outbreak" within three months, he said.

The next goal, Aylward said, is to be able to stop transmission within eight weeks of a new case being confirmed anywhere.

The third major goal is to increase the preparedness for dealing with Ebola in all nations that share borders with affected countries or have major transportation hubs, he said.

Doctors Without Borders, which has criticized the WHO and the international community, in general, for responding too slowly to the crisis, warned that the plan "should not give a false sense of hope."

"As an international public health emergency, states with the capacity to help have the responsibility to mobilize resources to the affected countries, rather than watching from the sidelines with a naive hope that the situation will improve," Brice de le Vingne, the group's director of operations, said in a statement.

Air France on Wednesday canceled its flights to Sierra Leone; the WHO has urged airlines to lift such restrictions.

"Right now there is a super risk of the response effort being choked off, being restricted, because we simply cannot get enough seats on enough airplanes to get people in and out, and rotating, to get goods and supplies in and out and rotating," he said.

Nigerian authorities, meanwhile, said a man who contracted Ebola after coming into contact with a traveler from Liberia had evaded surveillance and infected a doctor in southern Nigeria who later died.

The doctor is the sixth person to die of the disease in Nigeria and marks the first fatality outside the commercial capital of Lagos, where a Liberian-American man, Patrick Sawyer, arrived in late July.

The World Food Program says it is preparing to feed 1.3 million people in Guinea, Liberia and Sierra Leone in the coming months because measures to control an Ebola outbreak have cut off whole communities from markets, pushed up food prices and separated farmers from their fields. Denise Brown, the West Africa regional director for the U.N. agency, said $70 million is needed immediately to meet those needs.

Larson reported from Dakar, Senegal. Bashir Adigun in Abuja, Nigeria, Sarah DiLorenzo in Dakar and Maria Cheng in London contributed to this report.