After Ferguson Police Chiefs Reach Out to Black Communities 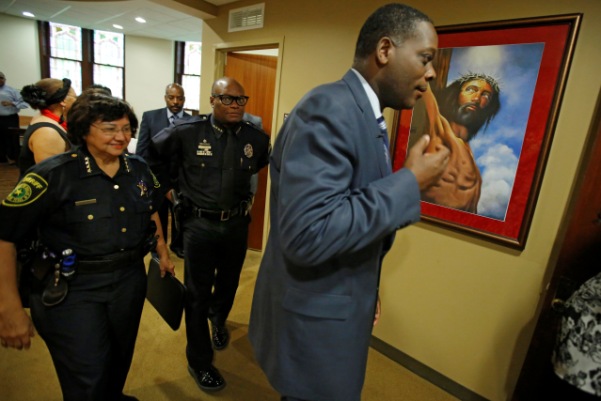 DALLAS (AP) — In the aftermath of the police shooting in Ferguson, Missouri, some police departments are renewing efforts to reach out to black communities to build trust — holding public meetings, fielding questions and letting people voice the anger they feel toward officers who patrol their neighborhoods.

"I'd much rather they shout at me at a town hall meeting at a church and get to know me afterward than not have a relationship," Brown said. After a police shooting has already happened, "it's too late to try to establish relationships."

Dallas has had 14 police shootings so far this year, including one that happened early Wednesday. Nine people have been killed. That follows last year's tally of 22 shootings and six deaths, according to police.

Both Brown and Watkins are black and grew up in Dallas. Watkins described his own mistrust of law enforcement as a young man and said more needs to be done to restore public confidence in law-enforcement agencies, particularly among blacks and Latinos.

"This is a reality that we deal with in this country," Watkins said. "And until we face it, we're always going to have issues like Ferguson. I don't want to have the same thing happen here."

Two Dallas officers were recently fired and indicted for separate shootings of civilians.

To address the issue, the department is running a pilot program for so-called body cameras that could be mounted on officers' lapels or vests to capture footage of their interactions with the public. A recent Cambridge University study showed that the cameras reduced the number of complaints against officers and the number of times officers used force in a yearlong trial with the police department in Rialto, California, a city of about 100,000 east of Los Angeles.

The Dallas department is also buying more Tasers to give officers a less-deadly option to subdue attackers, Brown said.

The fraught relationship between police and black residents was evident last week when a group of black protesters marched through south Dallas chanting the name of Michael Brown, the unarmed 18-year-old shot to death by a Ferguson officer.

The group calls itself the Huey P. Newton Gun Club, after one of the co-founders of the Black Panthers. About 30 people carried signs and long guns, which are permitted in most public places in Texas. Several protesters said their concerns went beyond Ferguson.

"A lot of people today are talking about Mike Brown," one of the group's organizers, Charles Goodson, told Dallas television station WFAA. "Mike Brown is not an isolated incident. We have many Mike Browns in the city of Dallas."

At a town hall meeting, the mother of a Dallas man killed by police confronted top law enforcement officials about what they were doing to protect civilian lives.

In Nashville, Tennessee, Police Chief Steve Anderson and several other law-enforcement and political leaders were part of a meeting last week that drew several hundred people, most of them black, to a Baptist church. Kansas City, Missouri, police have also begun a series of community forums where residents can meet with officers.

When a man died last month after being placed in a chokehold by officers on Staten Island, New York police moved quickly to contact community activists and Eric Garner's family, avoiding much of the unrest that affected Ferguson.

Less than two weeks after Brown was killed in Ferguson, St. Louis Police Chief Sam Dotson went to the scene where two officers shot and killed a knife-wielding man. The 25-year-old suspect, like Brown, was black.

Dotson knelt under yellow crime-scene tape and went into a crowd that was gathering nearby and chanting "Hands up! Don't shoot!" a refrain that became popular in Ferguson.

"I said, 'I'm the chief of police. I work for you," Dotson said. He said he wanted to share what he knew with protesters so they could have "as complete a picture" as police.

Among the police departments planning changes is Ferguson itself.

The city said in a statement that it would "learn from this tragedy." The statement outlined a range of actions being explored, including hiring more black officers, raising money to buy dashboard and body cameras, working more closely with schools to provide better resources for young people and rebuilding the business district affected by rioting.

Malik Aziz, chairman of the National Black Police Association, which represents 80,000 African-American police officers, said what happened in Ferguson was "one of many wakeup calls. The alarms seem to be ringing louder."