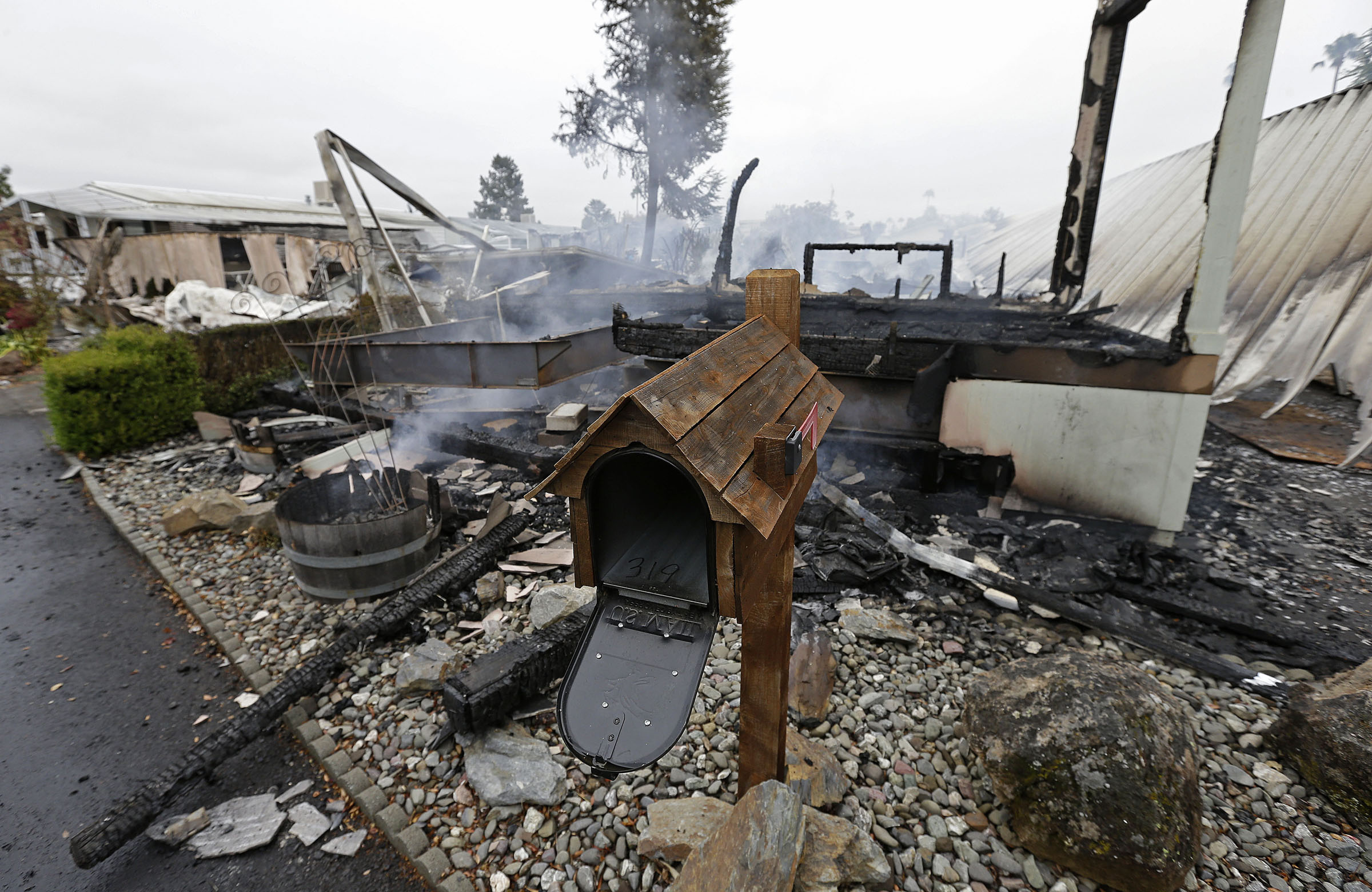 A mailbox is all that remains of one of four mobile homes which were destroyed in a gas fire Sunday, Aug. 24, 2014, at the Napa Valley Mobile Home Park, in Napa, Calif. A large earthquake caused significant damage and left at least three critically injured in California's northern Bay Area early Sunday, igniting fires, sending at least 87 people to a hospital, knocking out power to tens of thousands and sending residents running out of their homes in the darkness. (AP Photo/Ben Margot)

The magnitude-6.0 quake, centered near the city of Napa, an oasis of Victorian-era buildings nestled in the vineyard-studded hills of northern California, ruptured water mains and gas lines, hampering firefighters' efforts to extinguish the blazes that broke out after the temblor struck at 3:20 a.m.

Dazed residents who had run out of their homes in the dark and were too fearful of aftershocks to go back to bed wandered through Napa's historic downtown, where boulder-sized chunks of rubble and broken glass littered the streets. Dozens of homes and buildings across the Napa Valley were left unsafe to occupy, including an old county courthouse, where a 10-foot wide hole opened a view of the offices inside.

College student Eduardo Rivera said the home he shares with six relatives shook so violently that he kept getting knocked back into his bed as he tried to flee.

"When I woke up, my mom was screaming, and the sound from the earthquake was greater than my mom's screams," the 20-year-old Rivera said.

Gov. Jerry Brown declared a state of emergency for southern Napa County, directing state agencies to respond with equipment and personnel. President Barack Obama was briefed on the earthquake, the White House said, and federal officials were in touch with state and local emergency responders.

The temblor struck about six miles south of Napa and lasted 10 to 20 seconds, according to the United States Geological Survey. It was the largest to shake the San Francisco Bay Area since the magnitude-6.9 Loma Prieta quake struck in 1989, collapsing part of the Bay Bridge roadway and killing more than 60 people, most when an Oakland freeway collapsed.

Queen of the Valley Medical Center in Napa, where an outdoor triage tent was set up to handle the influx, reported treating 172 people in the emergency room, although hospital officials could not say how many of them were there for bruises and cuts suffered in the quake and how many for more routine injuries and illnesses.

Twelve people were admitted for broken bones, heart attacks and other problems directly related to the earthquake, including an adult who remained in critical condition on Sunday night and a 13-year-old boy.

The teen was hit by flying debris from a collapsed fireplace and had to be airlifted to the children's hospital at the University of California Davis hospital for a neurological evaluation. He condition was listed as serious, hospital spokeswoman Phyllis Brown said.

Napa Fire Department Operations Chief John Callanan said the city had exhausted its own resources trying to extinguish at least six fires after 60 water mains ruptured, as well as transporting injured residents, searching homes and collapsed carports for anyone trapped and responding to 100 reports of leaking gas.

Two of the fires happened at mobile home parks, including the one where four homes were destroyed and two others damaged, Callanan said. A ruptured water main there delayed efforts to fight the blaze until pumper trucks could be brought in, he said.

Nola Rawlins, 83, was one of the Napa Valley Mobile Home Park residents left homeless by the fire. No one was injured in the blaze, but Rawlins said she lost all her jewelry, papers and other belongings.

"There were some explosions, and it was burning. Everybody was out in the street," she said. "I couldn't get back in the house because they told everybody to go down to the clubhouse, so I didn't get anything out of the house."

U.S. Rep. Mike Thompson, who represents Napa, said federal and state officials had conducted an aerial survey of the area, but they wouldn't have a cost estimate for the damage until they can get on the ground and into buildings. He said that while Napa suffered the worst of it, there also was significant damage about 17 miles south on Mare Island in Vallejo, a former naval shipyard where a museum and historic homes were declared uninhabitable.

"It's bad any way you calculate it. But it could have been a heck of a lot worse," Thompson said.

While inspecting the shattered glass at her husband's storefront office in downtown Napa, Chris Malloy described calling for her two children in the dark as the quake rumbled under the family's home, tossing heavy pieces of furniture for several feet.

"It was shaking, and I was crawling on my hands and knees in the dark, looking for them," the 45-year-old woman said, wearing flip flops on feet left bloodied from crawling through broken glass.

Sunday's quake was felt widely throughout the region, with people reporting its effects more than 200 miles south of Napa and as far east as the Nevada border. Amtrak suspended service through the Bay area so tracks could be inspected.

Vintner Richard Ward of Saintsbury Winery south of Napa watched Sunday afternoon as workers righted toppled barrels and rescued a 500-pound grape de-stemmer that the quake had thrown to the ground.

"That's what happens when you're a mile from the epicenter," said Ward, who lost 300 to 400 bottles in the winery's basement.

The grape harvest was supposed to start overnight Monday, but it would now be pushed off a few days, he said. Had the harvest started a day earlier, the quake would have caught the workers among the heavy barrels when it struck, Ward said.

Mark Ghilarducci, director of the California Governor's Office of Emergency Services, told an afternoon news conference some 90 to 100 homes and buildings were deemed not habitable.

A Red Cross evacuation center was set up at a church, and crews were assessing damage to homes, bridges and roadways. The Napa Unified School District said classes were canceled for students Monday and that students would not be allowed to return to schools until they were checked.

"There's collapses, fires," said Napa Fire Capt. Doug Bridewell, standing in front of large pieces of masonry that broke loose from an early 20th-century office building where a fire had just been extinguished. "That's the worst shaking I've ever been in."

Bridewell said he had to climb over fallen furniture in his own home to check on his family before reporting to duty.

Pacific Gas and Electric spokesman Jeff Smith said an assessment found that about 70,000 customers lost power after the quake hit, but that number was down to around 2,200 by 11 p.m.

The depth of the earthquake was just under seven miles, and it was followed by numerous small aftershocks, the USGS said.

On Sunday night in Southern California, a small, magnitude-3.3 earthquake hit off the region's coast.

The U.S. Geological Survey says the temblor struck at 7:50 p.m. and was centered about 5 miles southwest of San Pedro and 6 miles southeast of Rancho Palos Verdes. There were no initial reports of damages, police said.