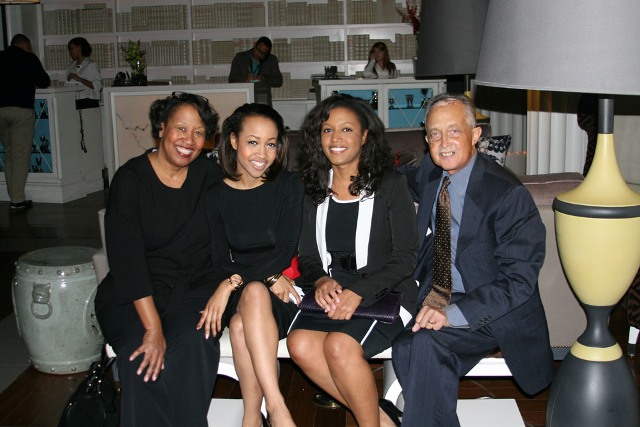 Everett Lee (right) with his wife and daughters in 2012. Lee’s leukemia has been in remission 12 years, thanks to a bone marrow transplant. Photo courtesy Everett Lee.

WASHINGTON (NNPA) – At the start of 2002, Everett Lee, 57 at the time, considered himself “healthier than all get out.” So when he found himself winded with the smallest tasks, he knew something was wrong.

He scheduled a physical with his doctor as soon as possible, including blood work, EKG, and x-ray.

Lee received an emergency blood transfusion over the weekend, and by Tuesday, he had been diagnosed with acute myelogenous leukemia. He started chemotherapy the following day.

Blood illnesses such as leukemia and sickle cell anemia can be treated through bone marrow transplants. But African Americans are least likely of all racial groups to find a viable donor, according to the National Marrow Donor Program. The nonprofit runs the world’s largest blood-cell database, known as the Be The Match Registry.

The dearth of donors of color affects all transplants, from blood-related procedures, to tissues such as corneas, to organs such as skin and kidneys. In fact more than 37,000 Black patients are awaiting organ transplants today – that’s 30 percent of the national organ transplant waitlist, according to the federal Organ Procurement and Transplant Network (OPTN).

There are only 16,014 still-living and still-registered African Americans who have donated an organ over the last 26 years. Last year, only 17 percent of posthumous donors were Black.

The organ and tissue donor registry is both federal and state based. Every state has its own registry, usually via the motor vehicle department. The OPTN keeps track of all of the donors registered nationally, and helps states coordinate matching, donation, organ transport, and transplant.

Signing up to be an organ-and-tissue, or bone marrow donor are simple, but separate processes. To be a posthumous organ and tissue donor, one must sign up through the state’s department of motor vehicles, or using DonateLife.net. A wallet-sized donor card will be issued through the mail. To become a living organ or tissue donor one must register with the federal United Network for Organ Sharing, and undergo a full physical and psych evaluation. To join the marrow registry as a potential donor, one can request a cheek-swab DNA kit and application from BeTheMatch.org.

Matching donors to patients is a painstaking process dependent on many factors. For organ and tissue transplants, these factors include blood types, body sizes, patient need, distance between patient and donor, and more. For bone marrow—or more accurately, any blood-creating procedure—the main factor is HLA, a DNA marker that immune systems use to tag all cells as part of the body. This makes it easier to identify foreign cells.

Corey Franklin works in transplant support, guiding donors through the process. Last year, he found himself on the other side of the desk.

He had signed up to be a marrow donor during a drive at his church back in 2002.

“I was already a registered organ donor. I just said, ‘Ok, I’ll sign up.’ I believe in helping people,” Franklin says. “I think like everyone, when you register you never imagine you’ll get called.”

But the call came last year; he was identified as a potential match for a 10-year-old girl in Paris. Such calls begin a four-to-six week process in which potential donors undergo tests to see if they have more matching markers and to verify their overall health. Meanwhile, patients undergo immune system suppression treatments and tests to ensure they can handle the procedure. With as close to 10 matching markers as possible and a clean bill of health for both people, the donation takes place.

“It was a lot of anxiety…waiting for the donation date. I remember being in the pre-op room and my [blood] pressure was through the roof, like what have I gotten myself into,” Franklin recalled.

He was to undergo the bone marrow method, a surgical procedure in which doctors extract liquid marrow from the lower back pelvic bone, under general anesthesia.

“I remember being in pain when I woke up, I was shaking because I was kind of cold. I was happy it was over. I think a few days after my donation, the epiphany hit me that I really did something. Not everyone can say ‘I saved someone’s life,’” says Franklin.

He says he has not been in contact with the recipient because of restrictive French regulations.

“One of the best things I say [to new donors] is that you’re going to suffer some pain as you go through the procedure, but it’s something you’re experiencing for a short amount of time, whereas you’re giving somebody another chance at life,” Franklin says. “It’s something I wear proudly and would definitely be willing to do again.”

The bone marrow method is used in 25 percent of donations. The rest use a process called PBSC, which is similar to donating blood.

Lee received a PBSC donation just five months after his initial diagnosis. His donor was a woman in Rockville, Md. who shares the same name as his youngest daughter. They had a 9.5 out of 10 HLA match.

Ideal marrow donors are healthy people between 18 and 44, but people of color are particularly needed.

Jasmon Augustine, a senior at the University of Houston-Clear Lake, is learning this through her involvement with the campus’ chapter of Be The Match.

“I think if people hear from someone who looks like them, someone who is involved not just saying for them to get involved, and showing the benefits of what they would be doing,” Augustine explains, “then that helps it sink in more. Even if they can’t or don’t want to get involved, they might be willing to pass along the information to friends.”

Dr. Clive Callender, surgeon and founder of the Howard University Hospital Transplant Center, came to similar conclusion. To raise awareness he launched a grassroots effort in Black communities around the

“Communities are completely unaware that African Americans are disproportionately affected, that we have the greatest need for organ and tissue transplants. But we also have to turn that awareness into action,” he said.

With the success of this pilot, Dr. Callender founded the Minority Organ and Tissue Transplant Education Program (MOTTEP) to expand the effort to all people of color. At first, MOTTEP’s mission was simply to build a more diverse donor pool through education on the issue. Over time, he realized that mission wasn’t enough.

“Unfortunately, minorities are winning the race from the cradle to the grave,” he says. “It’s very important to be healthy, because in order to be a donor you have to be compatible, healthy, and willing.”

Kidney failure, for example, is a particular issue for African Americans – 73 percent of transplants performed on Black people last year were for kidneys.

Today, Lee’s leukemia is in remission.

“I’ve been to drives and expos…I’d be talking to Blacks and telling them about [donations] and my experience, and they say, ‘I’ll be back.’ They don’t want to get on the list. But we are the lowest on the registry, which means every time a Black person gets blood cancer or a blood disease, we have a much lower chance of finding a donor than a White person does.”