NFL Facing New Reality on Marijuana Use for Concussions and Pain 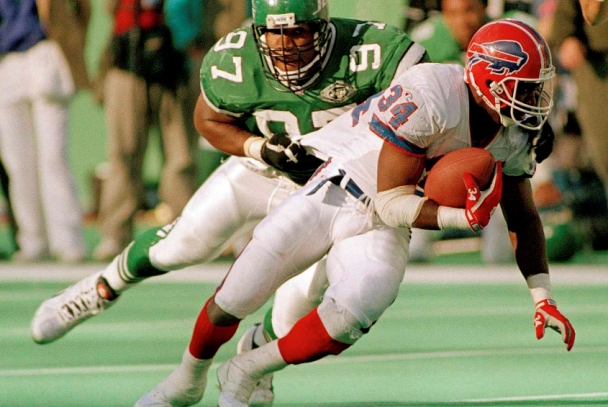 PHOTO: In this Oct. 24, 1993, file photo, New York Jets defensive lineman Marvin Washington (97) tackles Buffalo Bills' Thurman Thomas (34) in the third quarter of a football game at Giants Stadium in East Rutherford, N.J. As attitudes toward marijuana soften, and science slowly teases out marijuana's possible benefits for concussions and other injuries, the NFL is reaching a critical point in navigating its tenuous relationship with what is being recognized, more and more, as the analgesic of choice for many of its players. ``It's not, let's go smoke a joint,'' retired NFL defensive lineman Marvin Washington said. ``It's, what if you could take something that helps you heal faster from a concussion, that prevents your equilibrium from being off for two weeks and your eyesight for being off for four weeks?'' (AP Photo/Bill Kostroun, File)

Marijuana is casting an ever-thickening haze across NFL locker rooms, and it's not simply because more players are using it.

As attitudes toward the drug soften, and science slowly teases out marijuana's possible benefits for concussions and other injuries, the NFL is reaching a critical point in navigating its tenuous relationship with what is recognized as the analgesic of choice for many of its players.

"It's not, let's go smoke a joint," retired NFL defensive lineman Marvin Washington said. "It's, what if you could take something that helps you heal faster from a concussion, that prevents your equilibrium from being off for two weeks and your eyesight for being off for four weeks?"

One challenge the NFL faces is how to bring marijuana into the game as a pain reliever without condoning its use as a recreational drug. And facing a lawsuit filed on behalf of hundreds of former players complaining about the effects of prescription painkillers they say were pushed on them by team trainers and doctors, the NFL is looking for other ways to help players deal with the pain from a violent game.

A Gallup poll last year found 58 percent of Americans believe marijuana should be legalized. That's already happened in Colorado and Washington — the states that are home of last season's Super Bowl teams.

The World Anti-Doping Agency has said it does not need to catch out-of-competition marijuana users. And at least one high-profile coach, Pete Carroll of the champion Seahawks, publicly said he'd like to see the NFL study whether marijuana can help players.

There are no hard numbers on how many NFL players are using marijuana, but anecdotal evidence, including the arrest or league discipline of no fewer than a dozen players for pot over the past 18 months, suggests use is becoming more common.

Redskins offensive lineman Ryan Clark didn't want to pinpoint the number of current NFL players who smoke pot but said, "I know a lot of guys who don't regularly smoke marijuana who would use it during the season."

Washington wouldn't put a specific number on it but said he, too, knew his share of players who weren't shy about lighting up when he was in the league, including one guy "who just hated the pain pills they were giving out at the time." Another longtime defensive lineman, Marcellus Wiley, estimates half the players in the average NFL locker room were using it by the time he shut down his career in 2006.

The NFL is fighting lawsuits on two fronts — concussions and painkillers — both of which, some argue, could be positively influenced if marijuana were better tolerated by the league.

The science, however, is slow-moving and expensive and might not ever be conclusive, says behavioral psychologist Ryan Vandrey, who studies marijuana use at John Hopkins. Marijuana may work better for some people, while narcotics and other painkillers might be better for others.

"Different medicines work differently from person to person," Vandrey said. "There's pretty good science that shows marijuana does have pain relieving properties. Whether it's a better pain reliever than the other things available has never been evaluated."

Washington, who is part of the concussion lawsuit, is working with a bio-pharmaceutical and phyto-medical company called KannaLife Sciences that recently received licensing from the National Institutes of Health (NIH) to develop a drug to treat concussions using derivatives from medical marijuana.

Co-founder Thoma Kikis, who has been working on cannibas-based solutions to concussions for a few years, said he approached the NFL about signing on to the research.

"They didn't want to meet, didn't want to take a position to create any kind of controversy," Kikis said. "I understand that. But ultimately, they're going to have to make a decision and look into different research."

NFL Commissioner Roger Goodell has treaded gingerly around the subject. Before last season's Super Bowl he said the league would "follow the medicine" and not rule out allowing players to use marijuana for medical purposes. An NFL spokesman reiterated that this month, saying if medical advisers inform the league it should consider modifying the policy, it would explore possible changes.

A spokesman for the players union declined comment on marijuana, beyond saying the union is always looking for ways to improve the drug-testing policy. But earlier this year, NFLPA executive director DeMaurice Smith said the marijuana policy is secondary when set against the failure to bring Human Growth Hormone testing into the game. Some believe relaxing the marijuana rules could be linked to a deal that would bring in HGH testing.

"I've heard that in conversations," said Wiley, a plaintiff in the painkiller lawsuit. "And I think it's despicable that you'd pit them against each other."

The NFL drug policy has come under even more scrutiny this summer, after the NFL handed down a season-long suspension of Browns receiver Josh Gordon for multiple violations of the NFL substance-abuse policy. That suspension, especially when juxtaposed against the two-game ban Ray Rice received for domestic violence, has led some to say the league's priorities are out of whack.

In June, Harvard Medical School professor emeritus Lester Grinspoon, one of the forefathers of marijuana research, published an open letter to Goodell, urging him to drop urine testing for weed altogether and, more importantly, fund a crash research project for a marijuana-based drug that can alleviate the consequences of concussions.

"As much as I love to watch professional football, I'm beginning to feel like a Roman in the days when they would send Christians to the lions," Grinspoon said. "I don't want to be part of an audience that sees kids ruin their future with this game, and then the league doesn't give them any recourse to try to protect themselves."

The league does, in fact, fund sports-health research at the NIH, to the tune of a $30 million donation it made in 2012. But the science moves slowly no matter where it's conducted and, as Vandrey says, "the NFL is in business for playing football, not doing scientific research."

Meanwhile, marijuana becomes more and more acceptable across America every day. But even with the Super Bowl being dubbed "The Stoner Bowl" and the issue hanging heavily over the NFL's marquee event, the league has shown no signs of quick movement.

The league's threshold for a positive test remains 10 times lower than that of WADA, which changed its limit last year in a nod to the reality that the drug is not a performance enhancer.

The NFL's conundrum is figuring a graceful way to keep tabs on those who use marijuana recklessly — or recreationally — while giving others a legitimate form of pain relief.

"I'd like to see us advance the subject to where we're all mature and we get it," Wiley said, "and we let players make the decision for themselves."