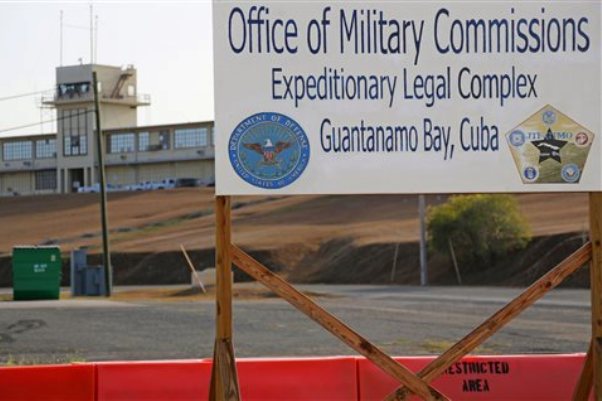 This June 17, 2013, file photo, shows a sign outside the Courthouse One Expeditionary Legal Complex at Naval Station Guantanamo Bay, Cuba. U.S. prosecutors are asking a military judge to reconsider his decision to try one of the men accused of plotting the Sept. 11 attack apart from the other four. Prosecutors have asked Army Col. James Pohl to hear arguments on their emergency motion involving Binalshibh first thing Monday, Aug. 11, 2014, at a pretrial hearing at the Guantanamo Bay naval base in Cuba. (AP Photo/Bill Gorman, File)

FORT MEADE, Md. (AP) — A pretrial hearing for suspects in the Sept. 11 terror attacks is in recess until mid-week while the military judge decides whether to reconsider his decision to try one of the men separate from the other four.

Army Col. James Pohl heard arguments for about an hour Monday at the U.S. naval base in Guantanamo Bay, Cuba.

Prosecutors say legal issues peculiar to Ramzi Binalshibh (RAM'-zee bin-al-SHEEB') can be resolved in a timely fashion without severing his case from the others. They say severance would unfairly delay justice for victims of the attacks.

The hearing will reconvene Wednesday afternoon at the earliest.

The hearing was shown by video at Fort Meade, near Baltimore.